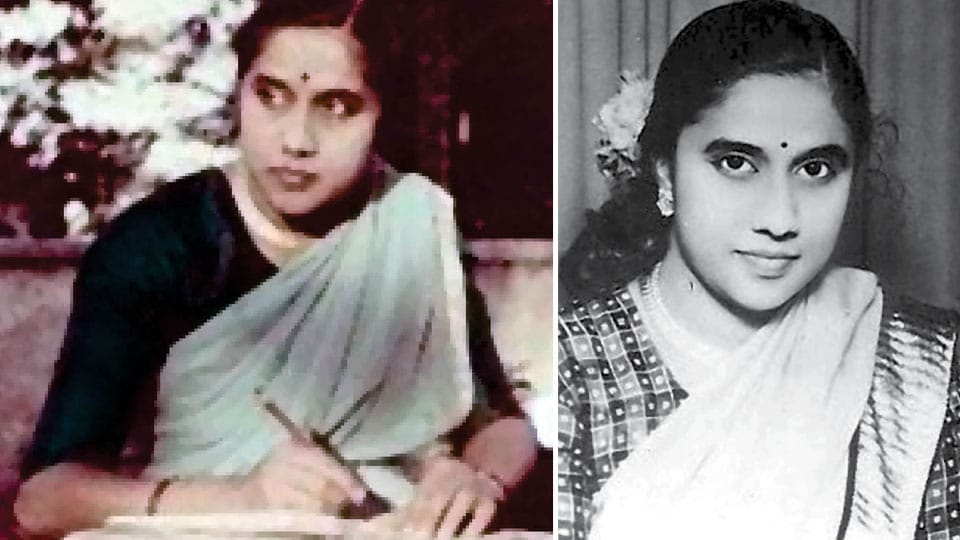 Her wit, irony, critique and realistic portrayal of the often deplorable condition of young women in our society made her one of the most popular Kannada writers of her day. Probably among the first to weave Psychology into her in-depth narratives, no facet of existence, however subtle or shockingly obvious was ever left out. Readers and movie-goers related to her characters on a level that was hitherto unseen. Here is a brief biographical sketch of a genius whose life was sadly very short lived…

Bhagirathi was born in Mandya on 1st of September, 1928 to parents B.M. Krishnaswamy and Thangamma. Krishnaswamy was the younger brother of the doyen of Kannada literature B.M. Srikantaiah and practised law. Bhagirathi’s younger sister Aryamba Pattabhi was also a famous Kannada writer. The sisters were born into a lineage of writers. Their aunt was another famous Kannada novelist Vani (B.N. Subbamma). Other prominent litterateurs in the family included the likes of Ashwatha, Ramachandra Sharma and Rajalakshmi N. Rao.

Though named Bhagirathi, she was registered in the school records as ‘Anasuya’ and was fondly called ‘Anchu’ at home.

She had her schooling at Mandya before moving to Mysore for her Intermediate qualification. She did her Bachelor’s degree at Maharaja’s College, Mysore, in her chosen subjects — Psychology, Sociology and Political Science. She graduated in 1947 and won the ‘Siddegowda Gold Medal’ for scoring the highest marks. She was also awarded the ‘Thathaiah Award’.

About this time, she met S.N. Shankar who was doing his Honours in English Literature at Maharaja’s College, Mysore. The two shared many an engaging discussion on their shared literary interests. She finally got married to Shankar in 1951, who was by now teaching English at Sarada Vilas College, Mysore. Soon after her education, for a brief period, she taught at an elementary school in Mandya before giving it up.

An asthmatic since childhood, her involvement in sports was limited. Since her younger years, she took avidly to reading voraciously. This contributed a great deal towards her writing sojourn. Her first novel “Hoovu Hannu” was penned in 1950. She was fluent in Kannada, English and Bengali and wrote under the pen name  ‘Triveni’.

As to why she chose this pen name remains unclear to this day. It is rumoured that the famous Kannada writer M.K. Indira after observing young Bhagirathi’s lush mane of hair remarked that she was blessed with enough hair on her head for three full length braids (and hence Tri-veni!).

She wrote for nearly 12 years and her output during this time was prolific. She wrote 21 novels, the last of which she left incomplete and was later finished on her behalf by another famous writer M.C. Padma. She wrote 41 short stories distributed across three volumes during these years.

Women’s plight in society (especially women who were left to fend for themselves) was superbly portrayed by Triveni in her novels “Apasvara” and “Apajaya”. Her novels, probably for the first time in modern Kannada literature incorporated ‘Psychology’ into the mainstream narrative. Sexual exploitation, financial exploitation and familial pressures on women were explored exhaustively. These struck a chord with readers because they were highly contemporaneous. Her writing was never devoid of humour. Triveni was able to portray the retired life of an elderly patriarch with ample humour — the never-ending worries, the restless temptations of the palate, the failing health and the commendable impetus to prevent in one’s children — the mistakes one had committed in their own time!

Her exploration of psychiatric conditions and their effect in day to day social life and more importantly how these aberrations were perceived by society at large were truly novel for her time. L.S. Sheshagiri Rao (late) even remarked that it was her early brush with Psychology in college that enabled her to so beautifully capture the nuances of several, otherwise troubling scenarios, in so eminently readable a fashion. She is often likened to the famous English novelist Jane Austen. It is pertinent here to remember the help rendered to Triveni by C.K. Vasudeva Rao, who was then a Psychologist at the Mental Asylum. He not only presented to her many a case history which she later chronicled as novellas (Mucchida Bagilu), but on one occasion facilitated Triveni to spend nearly two hours ‘locked up’ in the asylum with some of the inmates.

As it happened, one of the elderly female inmates walked up to Triveni, recognised her by name and confessed to having read her writings! She then placed a mat and invited Triveni to sit on it and then started relating to Triveni her own novel, which the inmate recollected rather vividly having read before! Triveni later recollected this incident to be a very surreal but unnerving incident and lamented on how an apparently educated literate lady had ended up being locked up in an asylum after losing her sanity.

Triveni’s writings got her recognition far and wide. Her novel “Samasyeya Magu” won the Devaraja Bahadur Award in 1962. The novel “Avala Mane” received the Karnataka Sahitya Akademi Award in 1960. Posthumously, she was awarded the ‘Karnataka Motion Picture Award’  in 1974 – 75 for the best Kannada movie storywright (Kankana). Her writings have been translated into many languages and have reached a far wider readership than otherwise possible. S.M. Ramaswamy has translated her novels “Apasvara” and “Apajaya” into Hindi. “Sharapanjara” was translated as “The Mad Woman” by Meera Narvekar into English. Triveni’s husband Shankar translated few of her novels into English and often converted them into plays. “Bekkina Kannu” was translated into Telugu by Sharvani. One of her short stories ‘Athithi Baralilla’ was published in an Urdu paper in Pakistan. Several of her novels were adapted to the screen and won critical acclaim. Among the novels which came onto the screen were “Bellimoda” (1970), “Sharapanjara” (1971), “Mukthi”, “Hoovu Hannu” (1993), “Hennele Chiguridaga” (1968), “Bekkina Kannu” (1966) [in Malayalam by Puttanna Kanagal] and “Kankana”. “Apasvara”, “Apajaya” and “Avala Mane” were adapted for the small screen and were received quite well by a home audience.

Triveni had an affectionate childhood, good education and loving marriage. Her novels were widely read and held in high esteem by the discerning public. Movies brought much needed publicity for her writing. Awards came her way in recognition of her talents. But, on a personal front, Triveni had a void she could never fill. Motherhood evaded her for a long time. Successive miscarriages spelt disaster to much awaited pregnancies. This eventually took a toll on her mental state. The prospect of waiting in dear anticipation, only to be left wanting at the end, proved mentally exhausting by the second time around. Expectedly, Triveni was able to successfully find a vent for these pent up emotions through her pen. Her novel “Athithi Baralilla”  (Eng: Guest did not arrive) is the result of this experience and it was to be one of her finest. She finally had a daughter (Meera) from her third pregnancy on 19th July, 1963. Days after the delivery, Triveni passed away on 29th July, 1963 due to maternal complications (Pulmonary Embolism). She was thirty-five-years-old!

Her house (at least over a century old), situated opposite the Tennis Club on Chamarajapuram Railway Station Road in Mysore was in the process of being converted into a Museum in her memory. To quote Austen: “Happiness in marriage is entirely a matter of chance.”  How true indeed!

Triveni remains immortal in the hearts and minds of her readers (and film-goers) who cannot help but relate their own lives with those of her characters who leap out of her pages with a sense of vividness and realism that only she could muster. May we see more of her ilk in future.

7 COMMENTS ON THIS POST To “Triveni: Mysore’s very own Jane Austen”