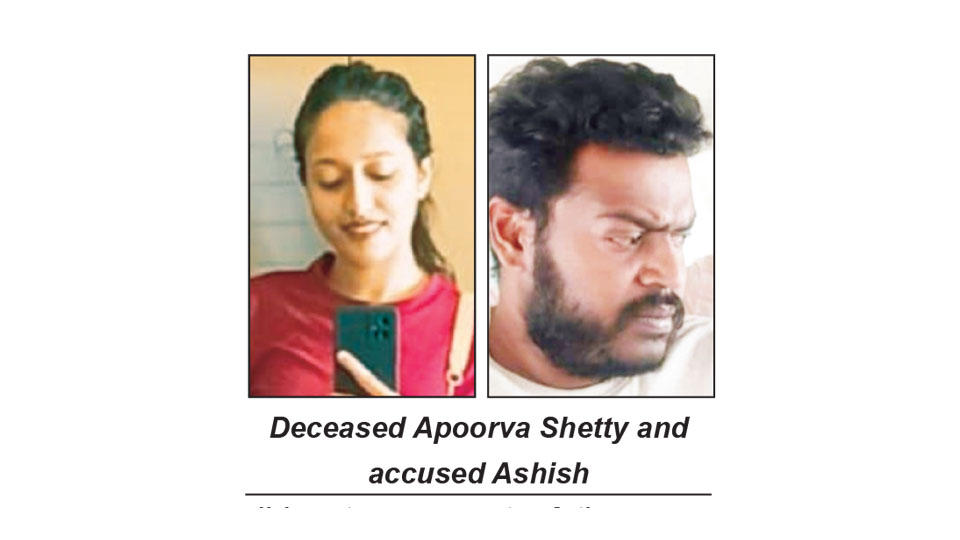 Girl found murdered at a private hotel in city

Mysore/Mysuru: A 21-year-old girl was found murdered at a private hotel on Hunsur Road here yesterday morning and the Police have arrested the accused (the girl’s lover) in the wee hours of today.

The accused had gone absconding after committing the crime. The Cops have brought the accused to the Forensic Science Department of MMC&RI for medical tests. The deceased has been identified as Apoorva Shetty (21), daughter of Ravi of Haralahalli village in Periyapatna taluk. She was pursuing her final year engineering course at a private college in city and was staying at a Paying Guest (PG) accommodation in Vijayanagar here. The accused, while taking the hotel room on rent had given his name as 26-year-old Ashish of Hinkal village.

Apoorva and Ashish had taken the room on the send floor of the hotel on rent on Aug. 29 night and yesterday at about 7.30 am, Ashish went out of the hotel alone. As he did not come even in the afternoon, the hotel staff, who knew that the girl was alone, grew suspicious as she did not come out of the room even for breakfast or lunch. She had not even ordered food to the room.

The hotel staff then called the room through the intercom but the calls were unanswered following which the staff peeped inside the room only to find the girl lying motionless and informed the hotel manager, who in turn informed the jurisdictional Devaraja Police.

Devaraja Inspector Diwakar and staff, who rushed to the hotel, got the room opened only to find her dead. Blood had oozed out from the girl’s nose and there was froth in her mouth. The body was shifted to MMC&RI mortuary for post-mortem. Based on the complaint from the girl’s parents, Devaraja Police, who had registered a case, began their investigation and arrested the accused in the wee hours of today, Police sources said.

It is learnt that the girl’s parents after coming to know about her love affair had fought with Ashish and had also warned Apoorva and Ashish to stay away from each other, but the two had continued meeting each other. The reason for Ashish to murder Apoorva will be known only after the Police complete their investigation.