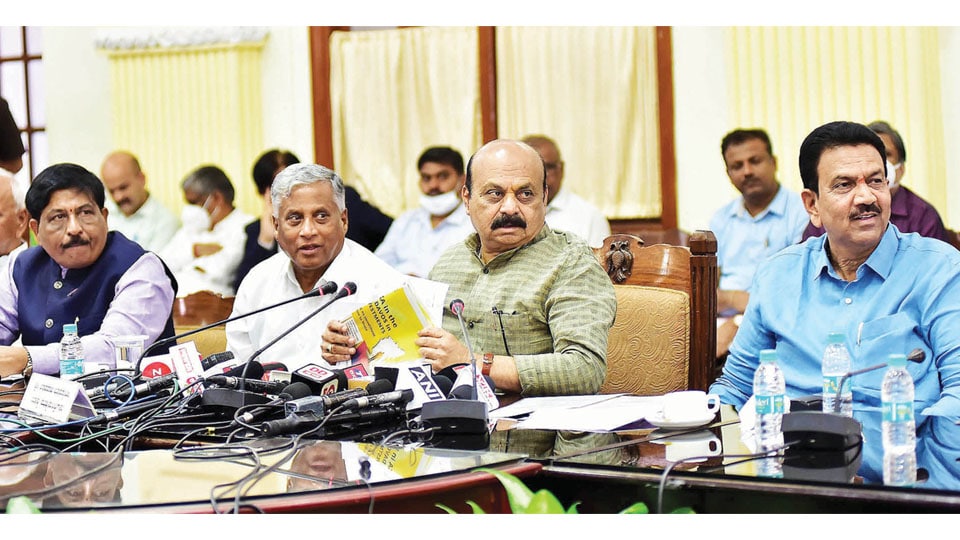 Bengaluru: Chief Minister Basavaraj Bommai, who returned to Bengaluru on Friday after attending the World Economic Forum (WEF) meet in Davos, said Karnataka had succeeded in drawing total investments of about Rs. 60,000 crore in various sectors by signing agreements with multinational companies during the summit held from May 23 to 26.

The conducive ecosystem for investments, forward-looking policies, technology, availability of skilled human resources, robust R&D base, incentives for entrepreneurs and availability of land, have enabled Karnataka to gain the confidence and trust of the investors, Bommai added.

The Chief Minister was addressing a media conference yesterday and said, “Karnataka is at the forefront in attracting investments. The WEF meet has proved a success for Karnataka as investment commitments to the tune of Rs. 65,000 crore has been received during the meet as talks were held with over 25 major corporates of the world in various sectors.”

Under the Beyond Bengaluru programme, the government discussed investment opportunities in Tumakuru, Hubballi-Dharwad, and Mysuru, he added.

“The world is looking at India as a major economic power. The companies have evinced interest in investing in Hydropower, Aerospace, Renewable Energy and other sectors. Focused sessions were held on Climate Change and Renewable Energy,” Bommai said.

The Government has decided to hold a three-day Invest Karnataka Summit from Nov. 2 and a Technology Summit from Nov. 16 to 18 in Bengaluru and both the summits would attract more investments, he said.

READ ALSO  When CM gestured to his wife from stage...

“Investors are happy about Karnataka’s policies” and “the State has not lost and is not going to lose” drawing investment. More than 50,000 acres had been kept ready for allotment of land for investors to set up companies, Bommai said.

ReNew Power Pvt Ltd has signed an MoU to invest Rs. 50,000 crore over next 7 years. The company is keen to set up its production units for Renewable Energy, Battery Storage and Green Hydrogen. The proposals would provide employment for about 30,000 persons, he said.

Lulu Group International has inked an MoU for investing Rs. 2,000 crore. The company is keen to open 4 shopping malls, Hyper Market and export oriented agro-products stores in the State with employment potential for more than 10,000 persons.