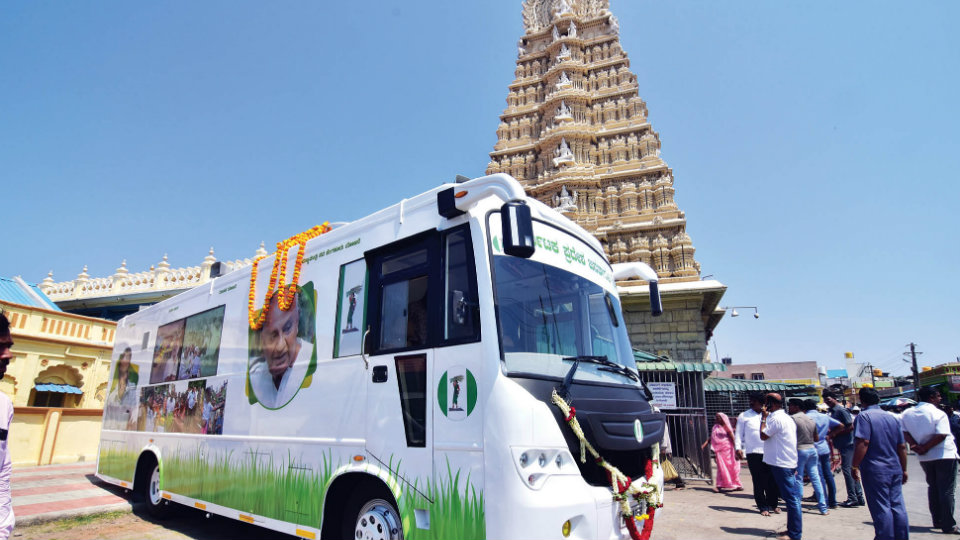 Mysuru: Massive rally in Mandya ahead of Nikhil Kumaraswamy filing his nomination papers, ‘Go Back’ slogans greeting JD(S) Supremo H.D. Deve Gowda in Tumakuru where he filed his nomination papers today and special pujas to JD(S) campaign rally vehicle ‘Vikasa Vahini Prachara Ratha’  atop Chamundi Hill were some of the highlights of today, the penultimate day for filing nominations.

While the JD(S) Supremo filed nomination in Tumakuru, his grandson Nikhil Kumaraswamy will file papers to contest as the alliance’s joint candidate from Mandya where he is pitted against Sumalatha Ambarish, an independent candidate who now has BJP’s backing.

Gowda, who is facing rebellion from local Congress leaders led by sitting MP S.P. Muddahanumegowda in Tumakuru, will contest as JD(S)-Congress’ joint candidate.

In Tumakuru, hundreds of Muddahanumegowda’s supporters and people shouted “Go Back” slogans against Deve Gowda this morning at a rally taken out before Muddahanumegowda filed his papers.

Nikhil’s rally to be taken out in Mandya is aimed at sending a message of ‘unity’. The JD(S) is organising a massive rally to counter the swelling crowds that gathered at Sumalatha Ambarish’s rally.

At the Chamundi Hill this morning, special pujas were performed to Vikasa Vahini Prachara Ratha, a modified air-conditioned bus in which CM Kumaraswamy and other leaders of JD(S) and Congress will campaign for the victory of Nikhil.

Later speaking to reporters, the CM denied the allegations of discontent brewing between coalition partners and lack of coordination between both party leaders and workers over joint campaigning. He said that he and both party leaders will campaign for the victory of coalition candidates in all 28 LS seats. He also came down upon his political opponents for maligning the image of H.D. Deve Gowda.