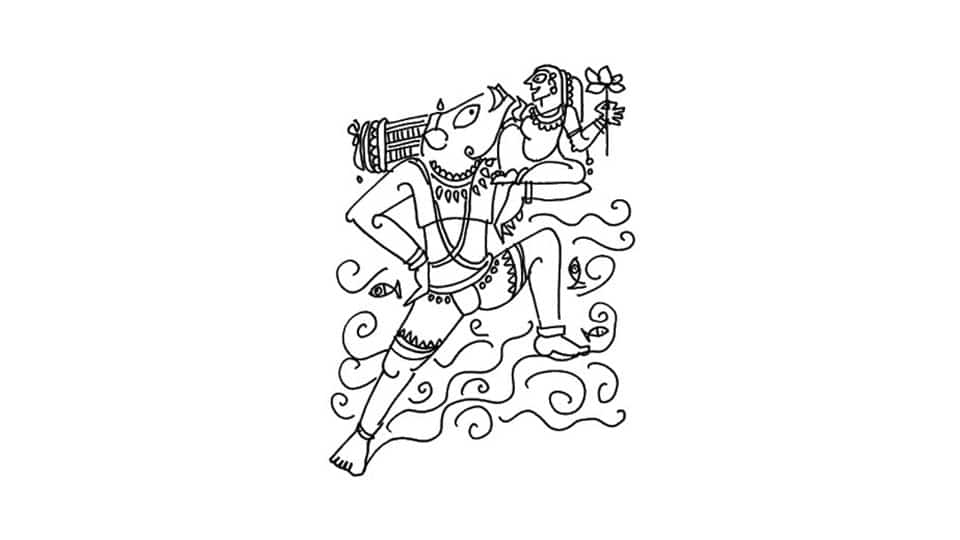 In temples like Jagannath Puri and in many South Indian temples, Vishnu is flanked by two forms of Lakshmi: Sridevi and Bhoodevi. What is the difference between the two?

Bhoodevi is the Goddess of the earth, from earth comes all our wealth. From within the earth come minerals; seeds germinate within earth and sprout above it to become either crops or trees and fruits and vegetables. On earth, we find pastures that nourish animal herds. Thus, for wealth, for Lakshmi, earth becomes very important. Therefore, in ancient India, the earth was visualised as a cow. The vegetation and minerals she produced was considered the milk from this earth-cow.

The king who domesticated the use of earth for the very first time was called Prithu, which is why the earth is also called Prithvi. Bhoodevi is Prithvi and she embodies the earth-cow. There are stories of how Bhoodevi constantly complains to Vishnu about how kings are misbehaving with her. Vishnu then descends on earth in various avatars to protect and save her from those who abuse her. He becomes the wild boar to raise her from the bottom of the sea. Dharma is basically about ensuring that the earth is respected. The earth itself then is Bhoodevi. And Vishnu, her consort, is Bhoopati.

Sridevi is visualised very differently. Unlike Bhoodevi, who has gravitas and patience and complains to Vishnu, Sridevi is whimsical and demanding. When Indra, king of Devas, treats her badly, she disappears into the ocean of milk. When she is churned out, she chooses to make Vishnu her husband, for he is a more worthy husband. She needs to be pampered a lot or she can run away. In temple lore, Lakshmi leaves Vaikuntha when Bhrigu kicks Vishnu on his chest for sleeping while the world abandons dharma. So, Vishnu descends on earth taking many forms, his avatar, to bring her back. This is why in many temple images, Vishnu has a footprint of Bhrigu on his right shoulder.

Sridevi is something like luck, charisma, popularity, brand equity, the status that we possess, things that you cannot mathematically capture but plays a key role in defining our value in a material world. Sridevi gives him what can be termed splendour, which is known in Zoroastrian traditions as Khvarenah, that gives ordinary men royal divine glory and transforms them into kings. The similarity of Khvarenah and Sri indicates an old Indo-Aryan belief.

When you possess splendour, you become attractive. It is that power of being able to walk into a room and making people realise how great you are. You radiate an aura of authority, people bow to you without you demanding that they bow to you. That which makes you inspire and impress people is what is called Sridevi. Sridevi is what ‘stars’ possess, that mysterious “je ne sais quoi” quality or “X” factor that makes them adorable. And makes people want to shower them with wealth, gifts, favours and attention.

Decoding Mythology Dr. Devdutt Pattanaik
This far and no further
When God says no, he has better plans for you