Home » Columns » Abracadabra By K. B. Ganapathy » Gone Away: To Germany & Austria — 7: Foot-loose in Munich City 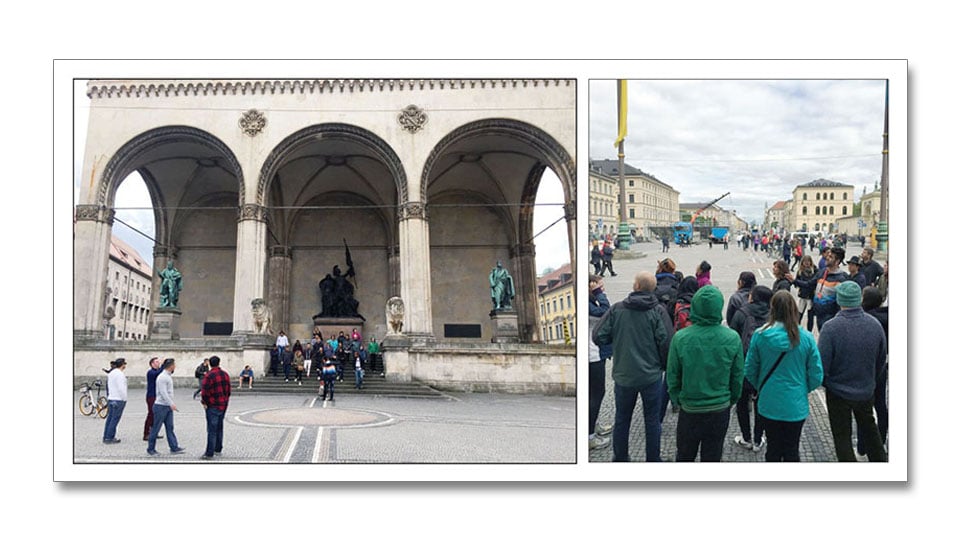 Gone Away: To Germany & Austria — 7: Foot-loose in Munich City

My readers must be wondering if I am on a long, strenuous, rambling trip in Germany because of the start-up hiccups in writing the travelogue of sorts in one go. The last one I wrote was on Nov. 2. Hence I owe an explanation. The reasons are many, but mainly those in our country who are elevated by our lay readers to the high pedestal of celebrity intellectuals.

These people are too presumptuous and opinionated. Some like Prannoy Roy go about scouting for the world leaders, in their given field of activity, to extract opinions from their sacred lips that would jell with their own secular, leftist, minority pampering and pandering or outright anti-Modi stand. Right or wrong, get Modi and fix him.

So, I had written in this column to pick holes in these bloated balloons and burst them. This done, now I am back to Munich Oktober Beer Festival where I had left you.

The following day we decided on a city tour walking — City Squares, Churches, Museums, Down-Town Open Area Shops and Restaurants, Beer Halls, Beer Garden etc. At one Church, our German friend showed us a marked area (see pic. 1) saying that it was the foot-print of the devil and narrated an interesting, gullible story. While constructing the Church the patrons of the Church could not find enough money to complete it. Therefore, a deal was made with the devil who was ready to help on condition that the Church should be a celebration of darkness, there shall not be any light inside the Church when completed. 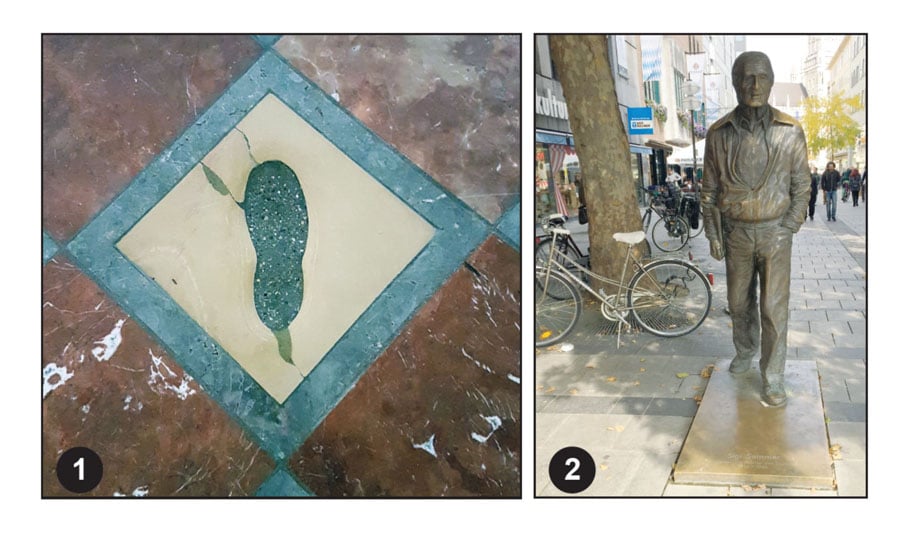 The patrons agreed. Well, many times we compromise our religious belief and principles and shake hands with the devil to achieve our goals! This was one. The architect was accordingly instructed  to keep the Church dark. But on the inaugural day, the devil found a few windows bringing in shafts of light. It got so wild, it cursed the Church and left its foot-print while fleeing from light. Those who might be wondering how the foot of a devil is, see the picture I have brought from this Munich Church!

The Marien Platz is a commonly visited tourist place. Unlike in India one never gets fatigued no matter how much one walks. But one will, of course, get hungry. So we decided to go to a good and popular restaurant called ‘Ratskeller Munchen.’ As we were entering, we heard a long shrill voice we are all familiar with — the Adhan, the Islamic call to worship by a muezzin. We were surprised and I asked my German friend if there was a mosque nearby. He held his steps back, looked at me and smiled. “No. It is a fake call of imitation.”

“But why?” I asked. “Don’t you know election is scheduled for next week? The opposition party may be asking the German voters if they want this kind of call five times a day by voting the incumbent Chancellor Angela Merkel.” A very clever, subtle way of anti-immigration propaganda I thought. At that time thousands of Syrian Muslim immigrants were flooding Germany and the German Chancellor Angela Merkel was receiving them with sympathy providing refuge.

During lunch, my German friend who stays about 25 kms from Munich in a village said that the Government had provided shelter to 50 Syrian immigrants in his village with container shelters. The villagers, numbering about 1,500, were levied special tax to help these immigrants.

Adolf Hitler was an Austrian, hailing from its capital Vienna, four-and-a-half-hour journey from Munich. His political career began from Munich where in the 1930s he was giving public speeches from the Bavarian monument in Munich with two lions guarding its entrance. We saw the monument and climbed a few steps to vicariously feel the thrill of Hitler’s mesmerising presence and speech.

As we strolled around the open spaces, clean, neat and dust-free with the area completely paved, I saw the bronze statue of a man in jerkin, ordinary looking. Out of curiosity I tried to read the tablet in German but the word “journalist” roused my interest and asked my friend to read it. It was of a local journalist, Sigi Sommer, Munich’s writer and Journalist, like yours truly in Mysuru, who was popular and hence a memorial in the midst of open-air shopping area of the city square (see pic 2).

Later we visited a famous mall where to our utter surprise noticed a shining, well-worn brass plate well-embedded on the floor at the foot of the ground floor escalator with a message from Mahatma Gandhi:

“There is no path to peace. Peace is the path.”

As we continued our walk around we passed by a very famous VVIP hotel by name  “Bay Erischer Hof.” It was looking like any other building on that road from outside.  We had ignored its presence when our German friend said that was the hotel where the American pop singer Michael Jackson stayed and made news by showing his child to the public, holding it out of the window. Since then people, his fans, have usurped the pedestal of a statue in front of the hotel in a park. The four sides of the pedestal and the ground around are pasted with Michael Jackson’s photos and flowers. Adulation in its natural form, I thought. A little away at the end of the park was another statue which was attracting attention for a different reason. 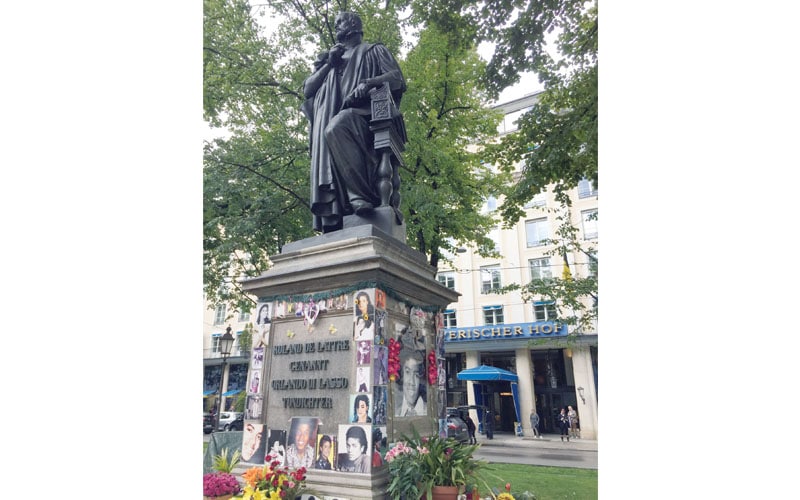 Adoration of Michael Jackson with his photos of childhood and adulthood. Tourists leave flowers here daily.