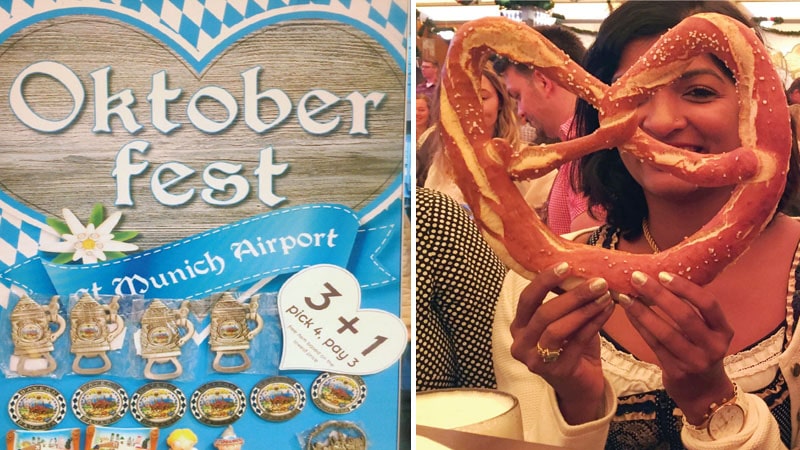 On 17th September we left Berlin for Munich carrying with us the memories of its history, greenery and the several waterfronts: Five rivers run through the city, has six canals that serve as transport routes and I was told it has within its borders 50 lakes. Enough? Do we have a lesson to learn from this?

One might wonder, why head for Munich October Beer Festival in the month of September. A good question. And there is a plausible explanation — although the festival concludes in October, most of it takes place in September. This year’s (2017) began from September 15 to October 3, spanning just over two weeks.

The original Oktober Beer Festival was held in October 1810 and this may be the reason for its nomenclature, though it starts in the middle of September each year. The original festival was to honour the wedding of a Bavarian Prince (Munich is in Bavaria) and a Princess from a neighbouring country held for five days. It was simply a joyous celebration by the local and the nearby citizenry with eating, drinking and merry-making to their unique music accompanied with shooting display and horse racing in and around a huge meadow on the edge of the Munich town. The tradition continues even though there are no Princes and Princesses to marry these days. This year, 2017, it was the 184th Oktoberfest.

From Berlin to Munich it was six-and-a-half hour journey stopping in-between important stations. Needless to say, like every infrastructure and public facility, the Railway Station and the train itself are of class. However, there was a surprise for me. There was no free toilet service as in the Airports. You have to use the coin to get in — yes, getting out is free!

Our German friends were there to receive us at the Railway Station in their two BMWs. Since it was not dark yet, we decided to go around the downtown area in a recce before checking into our hotel.

To deviate, on seeing the BMWs I figured in Berlin and in Munich more people used German-made cars even though they had a choice. It could be that it was less costly than the imported cars or may be patriotism (nationalism) of the kind practised during the days of Hitler or may be for the good reason German cars are better, strong and long-lasting like the legendary German made machines. I do not know, but it ignited my memory to remember an incident that happened in the Coffee Estate of an English man by name Mr. Parsons, I guess, where my maternal grandfather was a Manager. It was the year of the World War II and this was told to me by one of my six aunts many years later during a family get-together.

Mr. Parsons sent his driver to the Spencer’s, the prestigious shop of those days of the Raj (and even till recently) where the foreigners and the elite of the society shopped, to buy some cutlery — spoons, forks and table knives. When the items arrived the English man Mr. Parsons opened the box, removed a knife and closely examined it turning the knife over and over again. There was a scowl on his face. He was not pleased with the knife, the fork and the spoon, though to his wife Nancy they looked good and sparkling.

There was no telephone those days. So he called the driver, wrote a small note on his letterhead and sent him back to the Spencer’s. The driver returned and handed over the boxes that looked different. Mr. Parsons removed a knife and scrutinised it like he did before. A gentle smile appeared on his pink visage. “Nancy, see this beautiful set of cutlery. Made in England”.

Now, will our Indian “pseudo intellectuals” tell me if this Mr. Parsons was a patriot or a nationalist or a jingoist, please! Was he a secularist or a communalist or a racist? Mr. Parsons, thousands of miles away from his home, England, traversing land and sea, would still stubbornly send his driver back to Spencer’s  out of patriotism. Is there a lesson here for Indians belonging to different religions and ethnic groups? For some Indians their religion and their political ideology are above the country and hence some laws and principles of our country must be compromised. That certainly negates the cherished values of secularism and democracy. Let it be.

After all, no matter the cutlery is made in England or Germany. The purpose of its use is the same at the dining table. Our “intellectuals” could do well to cud-chew this food-for-thought I have pressed into  this Abracadabra.

Now let me come back to Munich and the Oktober Beer Festival. Our German friends treated us for a typical German dinner in a posh hotel starting with beer, (what else?) and the popular bite called ‘Pretzel’ (see picture) followed by fresh green salads in heaps, roasted knuckle of pork, Bavarian suckling pig, Bavarian roast chicken bon appetite. One of our German friends, I thought, was taking the Bavarian bull by the horn — he ordered for Boiled Beef of Alpine Ox!