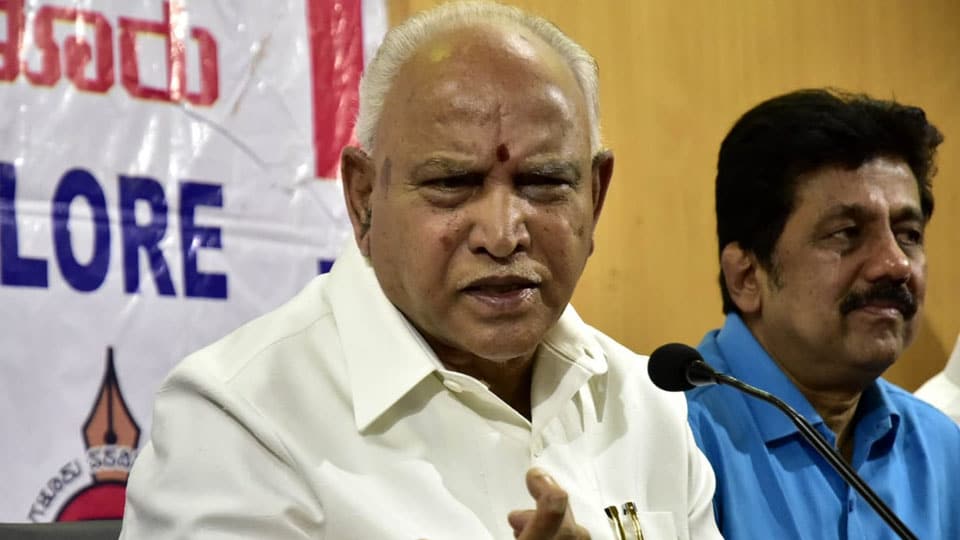 The CM has said that the Bharatiya Janata Party (BJP)-led State Government will remove any mention of the controversial ruler from all text books as well as cancel celebrations of his birth anniversary.

“We are going to drop everything, even in textbooks… I do not agree that Tipu Sultan was a freedom fighter,” Yediyurappa told reporters after an interaction in the Press Club of Bengaluru last evening. His statements come days ahead of Tipu Jayanti on Nov.10.

The “Mysore Tiger” is a divisive figure in Karnataka, especially Kodagu. Many declare him a hero and a freedom fighter and the Congress, under the Chief Ministership of Siddharamaiah, began State celebrations on his birth anniversary. Others, including the BJP, view him as a bigot and tyrant.

Soon after the CM’s words, BJP Karnataka tweeted: “By ending State celebrations of Tipu Jayanti, our CM has restored dignity to Kannadigas. As the next step, textbooks must be rewritten to portray the real Tipu Sultan to our children. They should be made aware of the Tyrant’s cruelty against Hindus and his anti Kannada rule.”

This year, the annual slugfest over the controversial ruler was triggered by BJP Legislator M.P. Appachu Ranjan when he wrote to the Government, asking to remove all references of Tipu Sultan from text books.

The State Government’s move is expected to unleash another round of political fracas between the Congress and the BJP over the legacy of the controversial ruler at a time when Karnataka is reeling under its worst floods in over a century.

While the Congress has maintained Tipu Sultan was a national hero, fighting the British and allowing religious diversity to thrive during his rule, the BJP views him as a tyrant who indulged in mass murders, torture, forced conversions to Islam, citing stories of atrocities against communities such as the Kodavas, Brahmins, and Christians, among others.

Though the BJP and Yediyurappa, among other leaders, have in the past been part of events that celebrated Tipu Sultan, their main contention has been whether it requires to be a Government-sponsored event.

Removing Tipu Sultan’s references from text books is akin to subverting history, Siddharamaiah said in response to Yediyurappa’s statement. “Is it a lie that Tipu fought the British or not? Can we change this then? We should teach children about history.” Siddharamaiah called the BJP a “bigot”.

Tipu Sultan was born on Nov.10, 1750 at Devanahalli, in the outskirts of Bengaluru, and was the ruler of Mysore from 1782 till his death in 1799. The insistence of the Siddharamaiah-led Congress Government to carry on with the celebrations despite opposition in Kodagu district led to clashes, claiming two lives in 2015.

All historical figures will have shades of grey: KPCC Chief

“Does Yediyurappa know who all praised Tipu Sultan? Former President Abdul Kalam said Tipu Sultan had pioneered rocket technology. Current President Ram Nath Kovind also made repeated mentions of Tipu when he spoke in the Karnataka Assembly,” he said. In March, a collection of rare artefacts from Tipu Sultan’s armoury, including one of his personal swords discovered by a couple in their attic in the English county of Berkshire, was auctioned for around 107,000 pounds.

Admitting that every historical figure will have “shades of grey,” he said it does not mean that they should be eradicated from history. “Petty politics, a communal mindset driven by hate — only they can say such things,” he said.

Karnataka Textbook Society has convened a meeting on Nov.7 for discussing dropping Tipu Sultan from school textbooks in the State. The meeting will be held at 12 noon in Vidhana Soudha.

The meeting comes in the wake of the direction issued by the Primary and Secondary Education Minister S. Suresh Kumar for deciding on the issue. Madikeri MLA Appachu Ranjan had submitted a representation to the Government seeking to remove lessons on Tipu from school textbooks.

“We have invited MLA Appachu Ranjan and the experts who were involved in drafting history textbook. We will submit the report to the Primary and Secondary Education Minister after hearing both experts and the MLA,” said a senior official of Karnataka Textbook Society.

8 COMMENTS ON THIS POST To “Government may drop Tipu from text books: CM”