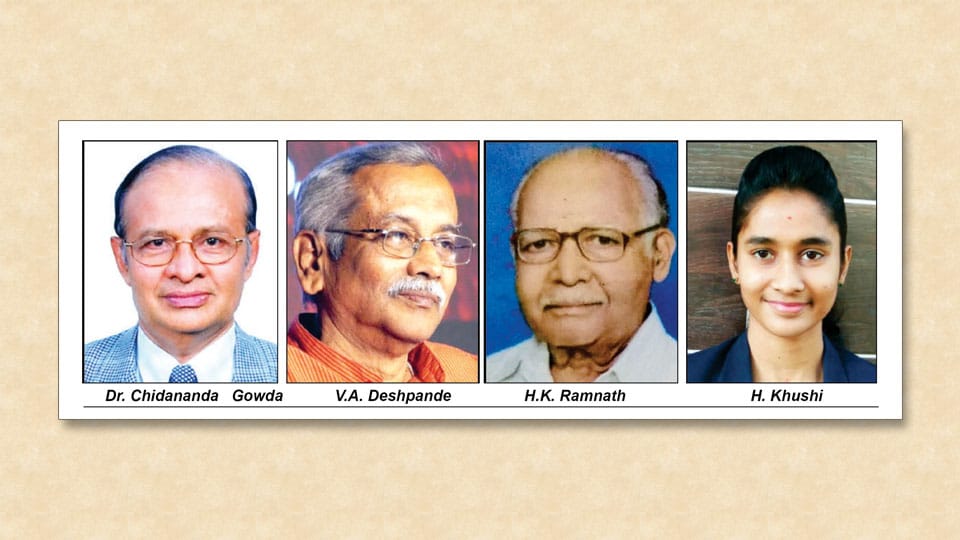 Four from Mysuru among 64 achievers to receive Rajyotsava Award tomorrow

Bengaluru: Government of Karnataka will honour 64 achievers with the prestigious Rajyotsava Award tomorrow (Nov.1) on the occasion of 64th Kannada Rajyotsava celebrations. This is the second highest civilian award in Karnataka after ‘Karnataka Ratna.’ The award, carrying a cash prize of Rs. One Lakh and a 20 gm Gold Medal, will be presented by Chief Minister B.S. Yediyurappa at a function to be held at Ravindra Kalakshetra in Bengaluru at 6 pm.

Dr. Chidananda Gowda: Born in Chokkady village near Sullia on June 15, 1942, he completed his graduation in Engineering from University Visvesvaraya College of Engineering at Bengaluru in 1964. He continued his studies and obtained Master’s degree in Engineering from the Maharaja Sayajirao University of Baroda in 1969. He returned to Bengaluru and completed his Ph.D from Indian Institute of Science in 1979. He married Tarini, the second daughter of ‘Rashtrakavi’ Kuvempu. He spent two years at NASA, USA and a year at Institute for Research in Computer Science and Automation (INRIA), France for conducting post-doctoral research.

Dr. Chidananda Gowda joined Sri Jayachamarajendra College of Engineering (SJCE) in Mysuru as a Professor in the Computer Science Department and later went on to head the Department. He also served as the Vice-Principal of the College for about 5 years and later as the Principal for about one-and-a-half-years. A Visiting Professor at INRIA, he was appointed as the Vice-Chancellor of Kuvempu University during 2002, a post which he held till Jan. 19, 2006. He has chaired technical conferences at Zurich, Paris, Tokyo and Luxembourg.

He has also authored books in Kannada and English. Some of his Kannada books include Engineering Geetegalu (Engineering Songs – 1980), Putaanigala Vignyana Padyagalu (Poems on Science for kids – 1984) and Samparka Madhyamagalu (Communication media – 1999).

Presently, a resident of ‘Udayaravi’ in VV Mohalla, Dr. Chidananda Gowda is on a foreign tour and is expected to be back in city in a couple of days.

Dr. H.K. Ramnath: A well- known theatre person, Dr.  Ramnath is a native of Hassan district. A resident of T.K. Layout in Mysuru, he is closely associated with Kalasuruchi in Kuvempunagar here for many years now. He is also the convenor of Kalasuruchi’s weekly programme for children ‘Kathe Kelona Banni’ which is held every Saturday between 4.30 pm and 5.30 pm.

Ramnath was conferred Ph.D for his thesis on ‘Rangabhoomiya Vikasa’ under the guidance of Sinduvalli Anantha Murthy, another senior theatre person. He has authored and directed many plays for children.

Speaking to Star of Mysore, Dr. Ramnath said he was happy for being selected for the award and thanked the Government for having recognised his services to theatre. He also said that the award would inspire him to continue with his activities in theatre.

V. A. Deshpande: Vyasamurthy Ananthrao Deshpande or V.A. Deshpande was born in Badami at Bagalkot district in 1955.  After completing his primary education from Dharwad School of Art, he moved to Maharaja Sayajirao University of Baroda to pursue Diploma in Sculpture. Later, he completed PG Diploma in Sculpture specialising in metal casting. He was awarded Karnataka Lalitkala Academy scholarship as well as Faculty of Fine Arts Merit Scholarship. He joined as a Lecturer in Malnad College of Engineering in the Department of Architecture in 1981. He later joined the newly-established Chamarajendra Academy of Visual Arts (CAVA) in Mysuru during 1983. He headed the institution as its Dean since 2005 for more than 10 years.

The 9.5 ft bronze statue of former Deputy Prime Minister Babu Jagjivan Ram, 9 ft bronze statue of Sarvagna, 9 ft Rani Abbakka Devi, 5.8 ft and 3ft statues of Sri Rajendra Swamiji of Suttur and statue of ‘Kuvempu sitting on a chair’ installed at the entrance to Manasagangothri campus on Bogadi Road are some of his exemplary works in sculpture.

“I am happy to have been selected for the award without submitting any application or influence. Recognising my services in the field of sculpture, Government of Karnataka has selected me for the award for which I am grateful,” he said.

Khushi: A first PUC student of Vijaya Vittala Composite PU College,  she is the elder daughter of RBI Officer Hemachandra and H. Kumuda, a home-maker.  Khushi, who has represented India six times in international yoga competition, is the youngest to have been selected for Rajyotsava award this year. Having started to practise yoga about six-and-half years back, Khushi is not only adept in various asanas but has also won accolades in artistic and rhythmic yoga. Having won a bronze medal in the First International Yoga Invitation Tournament held at Shanghai in China during 2014, Khushi has won gold in Solo artistic yogasana and pair rhythmic yogasana and silver in yogasana and pair artistic yogasana at the 6th Asian Yoga Championship held at Vietnam in 2016. In 2017, she entered the Golden Book of World Records by performing a tough yogaasana ‘Niralamaba Purna Chakrasana’ 15 times in a minute.

“It is one of the happiest moments for having been selected for Rajyotsava Award. It is only because of my parents and yoga guru that I have been able to achieve so much in a short span of time. I desire take up research in Yoga to help society in the years to come,” said a delighted Khushi, who is a recipient of many awards.

He was conferred Janapada Academy Award in 2013. The folk artiste has performed in various places including Delhi, Kolkata, Belagavi, Chitradurga, Bengaluru, Mysuru and other places. “The award has brought me immense happiness and it has increased my responsibility as an artiste. I am grateful to those who are responsible for selecting me to this prestigious award,” he said.

C.A. Kuttappa: Born to Chenanda Raghu Achaiah and Shanthi Achaiah in Kokeri village of Kodagu District, Kuttappa is now the Head Coach of Indian Men’s Boxing Team. The 40-year-old pugilist is credited with shaping some of the country’s most successful boxers such as Vijender Singh, M. Suranjoy Singh and Shiva Thapa, among others. He has also won silver and two bronze medals in the international boxing tournaments.

A resident of Gokulam 3rd Stage, Mysuru, Kuttappa is a Subedar in Madras Engineering Group (MEG) of the Indian Army. He is married to Shaila and the couple have a daughter Yudhi.

He was awarded with the prestigious Dronacharya Award for his services to Indian Boxing. “I had not expected Rajyotsava Award at such a young age. I am grateful to Karnataka Government for having selected me to this prestigious award,” he said.

Lt.Gen (retd.) Dr. B.N.B.M Prasad, SM, VSM: A resident of Beligeri in Madikeri Taluk, Lt. Gen. (retd.) Prasad was born to Narayana Bhat and Lakshmamma couple. Having joined the Indian Army in 1977, he retired in 2016 as Director General of Armed Forces Hospital Services.

Dr. Prasad has the credit of serving Field Marshall Manekshaw, former President Pranab Mukherjee, former Speaker Somnath Chatterjee among others. After having retired from the service, Dr. Prasad has been serving as a Professor, Department of Pulmonary Medicine at All India Institute of Medical Sciences (AIIMS), Jodhpur, Rajasthan.

Speaking to Star of Mysore, Dr. Prasad said he was delighted for having been selected for Rajyotsava Award and it was an honour for the Indian Army.  “I would dedicate this award to Indian Army”, he added.