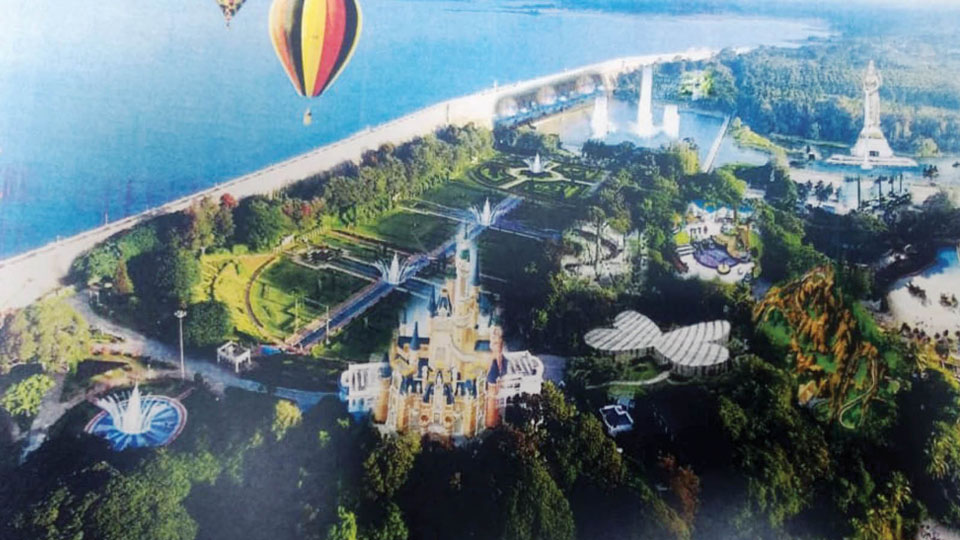 Mysore/Mysuru: The ambitious project of converting the Krishna Raja Sagar (KRS) Dam and Brindavan Gardens into a Disneyland-like tourist destination will not be a reality anytime soon as the State Government has not evinced any interest in it.

The project was initiated by the then CM H.D. Kumaraswamy and then Tourism Minister S.R. Mahesh,  strongly supported by then Water Resources Minister D.K. Shivakumar. They argued that the project would create employment to at least 40,000 people in Mandya and Mysuru districts.

The project had proposed constructing a giant 120-metre statue of Goddess Cauvery, a Tower Point that is taller than the KRS Dam, Krishnaraja Wadiyar Rotary (rotational exhibition), Toll Plaza, Entry Plaza and Gandaberunda statue. It was to come up in an 86-acre area in KRS.

The Disneyland project, however, was opposed by farmers and Green activists and also faced a hurdle from the Ministry of Environment, Forests and Climate Change (MoEFCC) which has declared the Ranganathittu Bird Sanctuary near Srirangapatna and its surrounding areas as an Eco-Sensitive Zone (ESZ).

As per the MoEFCC guidelines, no new construction of hotels and resorts will be allowed within one-kilometre radius of the bird sanctuary’s boundary or up to the extent of the ESZ. Also, Chief Minister Basavaraj Bommai’s predecessor B.S. Yediyurappa, who was the Opposition leader when the Congress-JD(S) Coalition Government was in power, had vehemently opposed the Disneyland project.

Yediyurappa had cornered the Government in the Assembly and said that the project was a waste of money and resources. He had alleged that the coalition Government had fallen victim to some powerful lobby.

Amidst the opposition, former Tourism Minister C.P. Yogeshwar had stated that the project will be revived and he held a couple of meetings in Bengaluru. Also, the project cost was escalated from Rs. 1,425 crore to Rs. 2,000 crore. The Cauvery Neeravari Nigam Limited had even prepared a Detailed Project Report and had submitted the same to the Government. But things did not move ahead.

Meanwhile, the COVID-19 pandemic struck and the State Government was forced to put its resources to fight the disease and the resultant deaths. Even the Technical Advisory Committee of the Institution of Engineers-India, Mysuru, took strong objection to fresh attempts to revive the controversial project.

The Committee submitted a report to the Government and said that the Dam has been designed in such a way that no structures should come up along the gardens for safety reasons.

“The Dam site has widespread rock formations beneath the earth and any deep excavation as entailed by the project to install towers and 120-metre statue requires blasting and this will be risky for the Dam structure,” the Committee opined with scientific evidence.