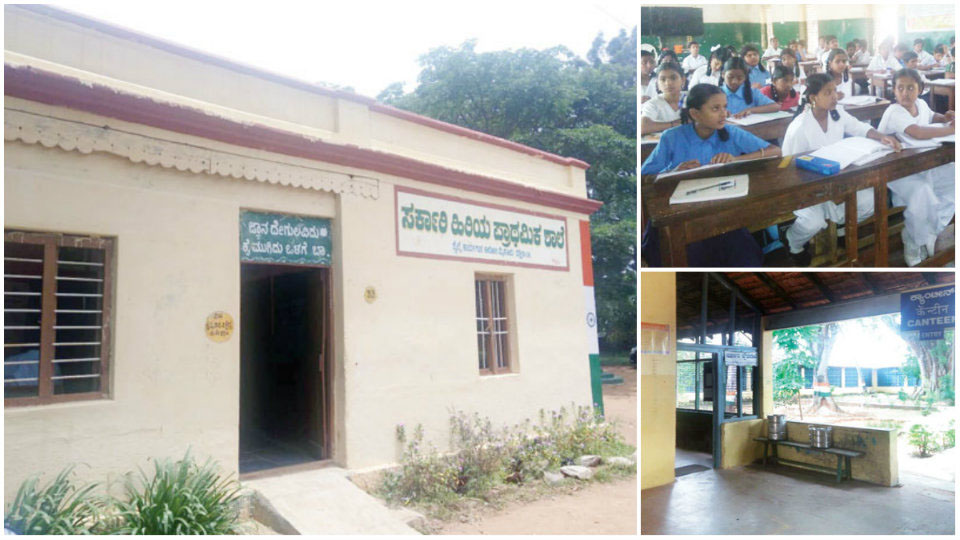 Government School in Mysuru runs from a Railway Workshop

Mysuru: Thanks to the efforts of Good Samaritans, hundreds of poor children are getting education in this Government School that does not have a building of its own. The Railway Workshop located on Manandawadi Road at Ashokapuram plays host to the decades-old Government School.

The Railway Department, apart from letting a building, has provided necessary infrastructure. As a result, the Higher Primary School and High School classes are being held in separate buildings. Even as the Government School does not have an own building, the Department of Public Instruction is not making any serious efforts to have one.

While the High School section is functioning at the canteen section of the Railway Workshop, the Higher Primary School is being run from a structure that appears like a house. The High School section, which started functioning from 1996, is still functioning from the canteen portion of the workshop.  With the Railways taking all pains to run the school, the Department of Public Instruction has chosen to remain silent. Moreover, the Railways Department, which has been so philanthropic in facilitating the function of the school, has not demanded any rent for its building that has been let out.

When the school got Government sanction two decades ago, the then Head Master of the school and the Railways Department had entered into an oral understanding on running the school from the workshop canteen. The Railway canteen building, constructed decades ago, has become dilapidated over the passage of time and hence needs immediate renovation or repairs.

The school comes under the jurisdiction of South BEO Office and this is the only school out of the nine schools that does not have an own building. Also, this school has the highest number of students among all the schools coming South Zone BEO. The school which caters to the educational needs of poor children from Srirampura, Mahadevapura, Nachanahallipalya, Devaraj Urs Colony and surrounding areas, has recorded excellent results in SSLC this year.

Thanks to the efforts of the School Head Mistress S. Padmamba and other faculty, the school has been doing exceptionally well, despite not having own building. Padmamba says that her subordinates have been putting their best efforts to achieve good academic results.

Pointing out that all efforts are being made for full utilisation of Government facilities, she says that thanks to the courtesy of Railways, the school has been running without any hitches or hurdles. However, the only shortcoming is that the school does not have a playground. Continuing, the Head Mistress said that there were a total of 127 children in three classes, out of whom 79 are boys and 48 girls.

Claiming that the school has been maintaining a good academic record over the years, Padmamba said that 25 out of 43 students who had appeared for SSLC in 2017-18, have passed out, which is a good record for any Government School, considering the fact that many Government schools elsewhere have recorded zero percentage pass.

Perhaps this is the only school which was started in pre-independence days, that does not have its own building. While the school is functioning from Railway Workshop buildings, the Railways has been graceful enough to provide civic amenities such as toilets and drinking water. But the lackadaisical attitude of the Public Instruction Department in providing the much-needed infrastructure has let down the poor students studying in the school. At present, the High School has four teachers. Higher Primary School Head Mistress Vijaya Shanbhag says that the school began functioning during the days of the Maharaja and catered to the needs of children of the Railway Workshop employees. The school is running classes from first to seventh standard and has a total of 60 students enrolled, she added.