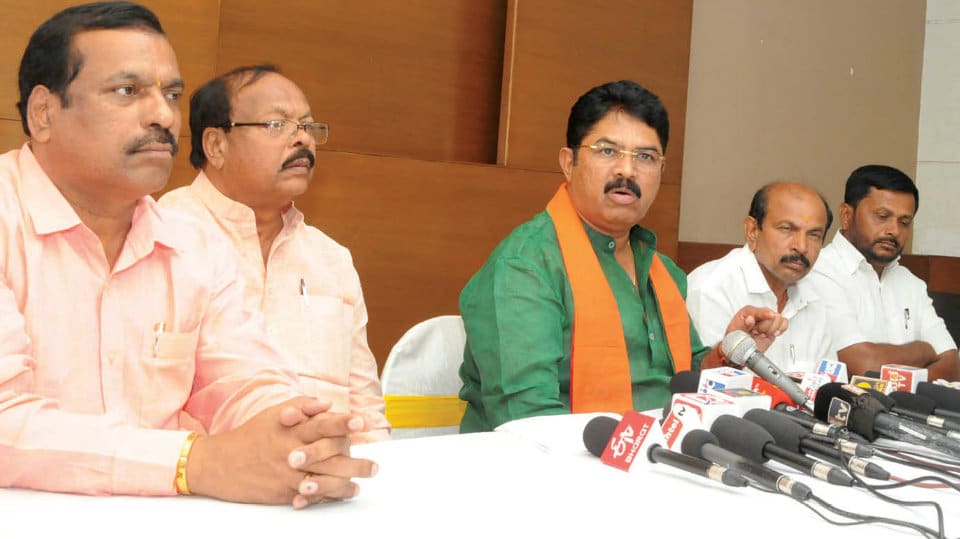 Government to celebrate Tipu Jayanti at Ravindra Kalakshetra on Nov.10

Bengaluru:  Even as the BJP is vehemently opposing the Tipu Jayanti celebration, the Government will be celebrating the Jayanti at Ravindra Kalakshetra here on Nov.10.

Speaking to press persons here yesterday, Deputy Chief Minister Dr. G. Parameshwara, who is also the Home Minister, said that the Jayanti celebration will take place at Ravindra Kalashetra before 2 pm on Nov. 10.

Pointing out that the venue for the celebration was fixed after taking into consideration Law and Order and security issues, Dr. Parameshwara warned that action will be taken against those trying to disturb the celebration or cause violence.

He further said that the Government has directed all District Administrations of the State to allow Jayanti celebration only in halls and auditoriums, sans any posters, banners, flex boards etc.

He warned of stringent action against those who send provocative messages in social media and through other platforms.

While the JD(S)-Congress Coalition Government is going ahead with Tipu Jayanti celebration, the Opposition BJP is all set to stage a State-wide stir across the State on Nov.9.

Announcing this during a press meet at a private hotel in Mysuru yesterday, senior BJP leader and MLA R. Ashok said that Tipu was anti-Kannada and the celebration of Tipu Jayanti was an insult to the people of the State.

Claiming that Tipu Sultan used to send messages and circulars in Persian language, Ashok alleged that the Coalition Government was celebrating Tipu Jayanti only for vote bank.

Maintaining that celebrating Tipu Jayanti was an insult to Chitradurga’s Madakari Nayaka and Onake Obavva, Ashok expressed apprehension that organisations such as Karnataka Forum for Dignity (KFD) and Popular Front of India (PFI) may misuse the occasion to create violence in the State.

Warning that the Government has to take the blame for any untoward incidents that may take place during the celebration, the BJP leader said that protests will continue in some parts of the State on Nov.10, 11 and 12 too.

Challenging the Government to arrest BJP activists during the protests, Ashok reiterated that anti-national elements may misuse the occasion to create trouble in the State.

Meanwhile, State BJP President and Leader of the Opposition in the Legislative Assembly, B.S. Yeddyurappa (BSY) has, in a press release, urged the State Government to drop its decision to celebrate Tipu Jayanti and not to stand on prestige or ego. “The people’s sentiments and emotions against Tipu is strong and widespread. It is the duty of the Government to honour people’s sentiments,” BSY has stated.

“Tipu Sultan was a controversial person on many counts. He was also a religious bigot. Historical records prove that he had ordered the massacre of thousands of Kodavas during his invasion of Malabar,” the statement further added.

“Tipu had also ordered the execution of Mandayam Iyengars at the temple town of Melkote in Mandya on the day of Deepawali festival. The reason was that these Iyengars had supported the then Maharaja of Mysore and demanded that the Kingdom be given back.

“It is pertinent to mention that thousands of Kodavas staged protest demonstration in front of French Embassy in Delhi recently. They demanded an apology from the French Government for supporting Tipu in his war against natives and tribals,” he said.

Taking strong exception to the statement made by Dy.CM Dr. G. Parameshwara that the Government will take action against those who oppose Tipu Jayanti celebrations, BSY said, “We have every right to oppose what is blatantly wrong decision and that which is against the people’s wishes.”

Stating that Tipu Jayanti celebration is a new-found strategy of the Congress party as a part of its politics of minority appeasement, BSY has said, “if the Government is so keen to honour eminent personalities from Muslim community, we have late Dr. APJ Abdul Kalam or War Hero Abdul Hamid.”

“It is worthwhile to recall that Prime Minister Narendra Modi visited the family of Abdul Hamid who was martyred in 1965 war. Let the Karnataka Government emulate the Prime Minister,” he said and reiterated that the Government should honour people’s sentiments and drop its decision to celebrate Tipu Jayanti.

14 COMMENTS ON THIS POST To “Government to celebrate Tipu Jayanti at Ravindra Kalakshetra on Nov.10”