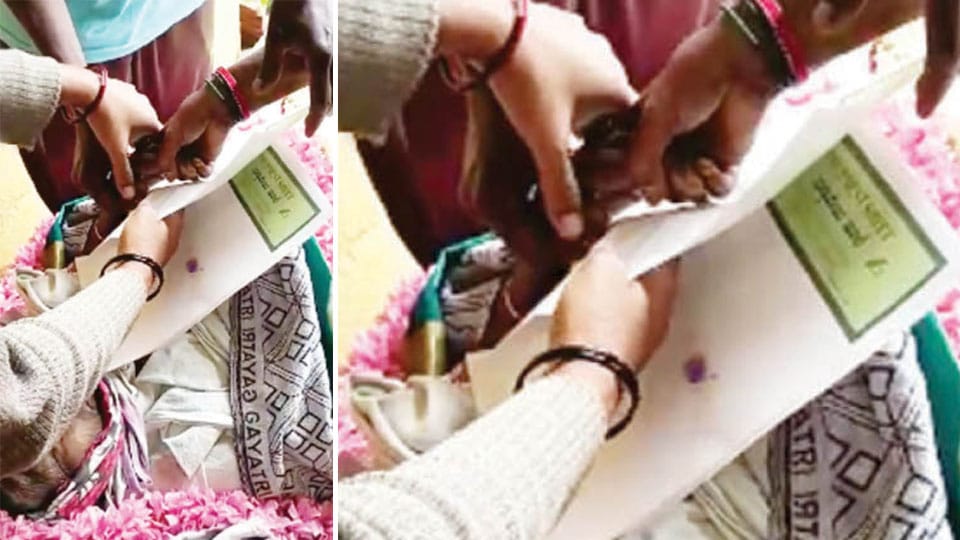 Mysore/Mysuru: An inhuman incident of relatives taking the thumb impression of a dead woman on blank document papers to claim her property has been reported at Srirampura in city recently.

Ironically, a woman, who captured the video of the relatives taking the thumb impression of the dead woman and questioned them, was issued a warning.

The video, which has now gone viral on social media, shows a few people getting the thumb impression of the dead woman on blank papers and one of them even going to the extent of saying “let her videograph it” without expressing fear of being recognised.

It is learnt that the incident took place a few days ago in Srirampura. The dead woman is said to have owned about 14 acre land worth crores of rupees and does not have husband or children except for two elder sisters and a younger brother.

The video of the nephew and other family members taking the thumb impression of the dead woman and a few relatives telling the girl who had made the video that she has nothing to do with it has gone viral on social media. A case has been registered at Vidyaranyapuram Police Station in this regard.

ONE COMMENT ON THIS POST To “Greed for property: Nephew takes thumb impression of dead woman on blank papers”