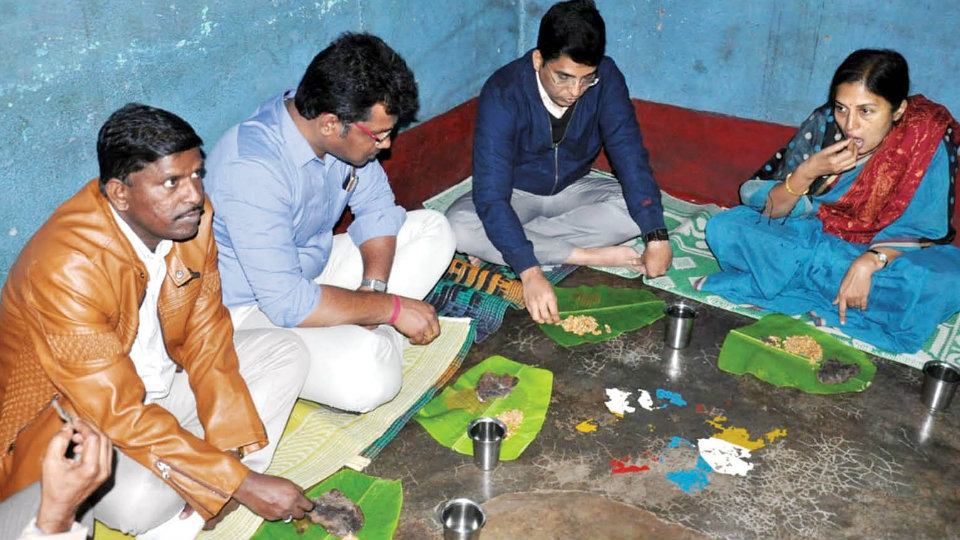 Bureaucrats do a HDK in Chamarajanagar

Chamarajanagar: Who says only politicians do ‘Grama Vasthavya’ (village stay) to listen to the problems faced by ground-level people and give them solutions? Even officers, if they mind, can stay in villages as it is the officers who implement government schemes, programmes and policies bringing the most backward to the mainstream. And there is no better way than ‘Grama Vasthavya’ to understand the realities and the hardships faced by the local communities who live in abject poverty, devoid of any government facilities.

Taking the government to the doorsteps of villages were Chamarajanagar Deputy Commissioner B.B. Cauvery and Zilla Panchayat Chief Executive Officer (CEO) Dr. K. Harish Kumar along with a battery of officials. They stayed at Bedaguli as part of “Haadi Vasthavya”, inspired by the ‘Grama Vasthavya’ programme of Chief Minister H.D. Kumaraswamy (HDK). Bedaguli is one of the most backward places in Chamarajanagar District.

For the record, Chamarajanagar itself is one of the most backward districts in Karnataka where all these decades, government schemes, funds programmes have hardly reached the grass-root level. Most of the areas do not have electricity and the residents still make good with primitive kerosene lamps, what they locally call “Seeme Yenne .”

Both the top officials stayed at a tribal colony in Bedaguli on Wednesday, Jan. 31 and had a hands-on experience on the living conditions of tribal hamlets. The tribals, on their part, were excited that the DC and the ZP CEO were visiting them to hear out their problems. The officials were welcomed traditionally along with ‘arati’, ‘kumkum’ and ‘vermillion.’

The tribals presented their “Gorukana Nruthya” accompanied by native musical instruments. The dancers were decked with strings of forest flowers, leaves and bamboo sticks and an air of celebration descended on the Bedaguli tribal hamlet.

Though the officials reached the tribal hamlet at 9.30 pm, the enthusiasm to receive them was at its peak. Residents of Panajanuru Gate, Bedaguli, Marigudi Podu, Ramaiahanapodu, Bisilukere and Kadigere had gathered at the place.

Veerappan land: Every other South Indian who in the know of things in Chamarajanagar would be familiar with home-grown ‘homo ,’ one Koose Muniswamy Veerappa Goundar (1952-2004) alias Veerappan. He was known for poaching, smuggling, kidnapping, killing and crucially, evading capture until the encounter in 2004 that resulted in his death.

Today, there are no wild people and there are only wild animals and tribals in the area. Bedaguli was one of Veerappan’s areas of operation and politicians, government officials and even armed men in uniforms dreaded at the very thought of coming here. So much was the terror unleashed by the brigand. Things have, however, changed for better now and the Forest Department takes curious tourists and trekkers to the heart            of Veerappan land.

Giving a patient ear to the woes aired by tribals, DC Cauvery said that the government has ordered officials to stay at villages to understand the ground-level problems and steps will be taken to implement government schemes at Bedaguli and surrounding areas. ZP CEO Dr. Harish Kumar told the tribals that they had come to villages to hear their problems first-hand instead of sitting inside their offices.

Following various demands placed by the tribals, the officers said that coordination between departments was necessary to implement schemes. Emphasis will be laid to preserve and enable continuation of the traditional lifestyle of tribals and at the same time provide them good education, he added.

Even the DC laid special stress on tribal education and urged the communities to compulsorily send their children to the government schools for tribals instead of making them work in fields and forests. She assured them that strict action will be taken against those who supply liquor illegally to tribal hamlets. Many women complained that liquor was abundantly available and it was very difficult for them to rein in their men when they are drunk.

For dinner and the next day’s breakfast, the officers were served with ragi mudde, curry made out of pulses, hurali palya, tubers, honey and other delicacies procured from the forest and prepared traditionally in earthen pots. The officials stayed overnight at the Ashrama School in the hamlet. The officials visited all the other hamlets the next morning before leaving for Chamarajanagar, a journey of 60 kilometres.