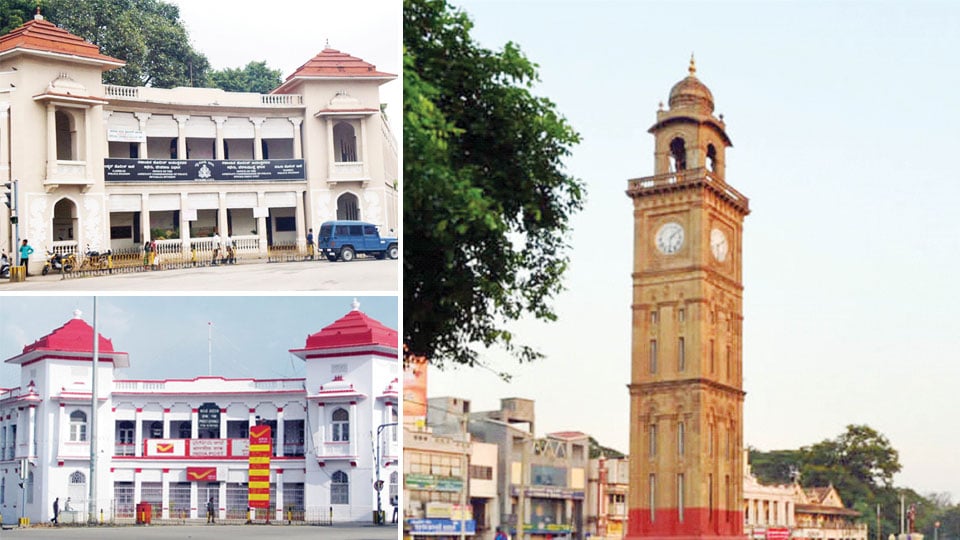 The Wadiyar dynasty of Mysore State had a divine heart and a magic sceptre in their hand. Their belief in Goddess Chamundeshwari was the  divine driving force behind their rule. And, as if to give credence to their belief in Goddess Chamundi, the dynasty’s womenfolk were equal participants in the protection and development of the State. Wadiyars built their Mysore State like craftsmen, for whom every detail was an important part of the whole.

It is in a wholesome view of their rule that Mysore city became the fulcrum of Wadiyars’  magical creation. Palaces they built in Mysore were not as much for a show of pomp and pageantry, as much a portrayal of an overall majesty and vision of a capital city. The establishment of the hydro-electricity generation station at Shivanasamudram, near Mysore, in 1908, was only the second such facility in the country at that time. It electrified the prosperity of the State and illuminated the Mysore city and the Mysore Palace. Mysore city adopted the best practices found in the  important European cities.

Mysore had buildings and châteaus; fountains and circles; gardens with manicured pathways and roads; gateways and arches; and intricately designed road-side electric lamp-posts and lakes. The residential areas were well spread out and provided with necessary facilities such as electricity, piped drinking water, underground drainage and very responsive civic administration. Mysore also prided with a University, a Race Course, a large Zoo and a Museum.

This iconic city was an image of any European city and  was the pride of the Mysore State. It became a model capital city to be replicated by many other Princely States like Baroda, Jaipur and Indore. Therefore, Mysore was  a city planners’ dream.

The grand Amba Vilas Palace was surrounded by orchards, gardens and parks. Two fountains — the Hardinge Circle Fountain and the Elgin Fountain  — on either sides of Chamaraja Circle on Albert Victor road gave a good expanse and elevation to the Mysore Palace. The Elgin Fountain was located at the very spot of the present K.R. Circle and was a part of large garden, pillared gateways on either side and very imposing Lansdowne building as a backdrop.

Hardinge Circle had a big circular fountain where the water springs rose in varying heights in several circles, like today’s  much touted ‘modern’ musical fountain of Brindavan Gardens. And during the evenings, the fast changing illuminated and colourful lights of the fountain were very mesmerising. Music bands performed during the evenings at this fountain. Hardinge Circle had six access roads and each such entry point was having well-designed, polished, coloured and pillared gateways on either side of the roads with elegant electric lights, lamp shades at the top. Huge trees at the borders gave a green backdrop and enhanced the beauty of the fountain’s environs.

Just behind the Mysore Zoo, a Thandi Sadak, a green-cave formed by flowering creepers and the creeper buntings  between huge trees on Lalitha Mahal road were distinct features of green Mysore. The Palace itself was surrounded by orchards and gardens along the fort walls.  Curzon Park and Kuppanna Park provided greenery and vast visage to the entire surroundings facing the Amba Vilas Palace. The present KSRTC bus stand was an orchard with guava, chikkoo, mango and other fruit trees.

The  Amba Vilas Palace was surrounded by beautiful buildings. On its Southern side were aesthetically designed Gun House and two Palace Office Complexes. On its Western side were the Sanskrit College, the City Municipality building, Motikhana building  and Lansdowne building. There were Fountains, Circles and Gateways of polished, coloured, granite stone pillars with very decorative lamps at several strategic junctions all round the Palace. The building housing the Palace Band and the Palace Motor Garage and the Chittaranjan Palace at the far end of the Albert Victor Road were part of the Amba Vilas Palace surroundings.

The Rangacharlu Memorial Town Hall, amidst the vast open green field in front of this Palace itself, was surrounded by private buildings of equally aesthetic architecture like Cauveripattanam building and the C.P.C building. Not very far away from the Silver Jubilee Clock Tower, there was Garden Hotel, mainly visited by the foreign guests.

Wellington Lodge behind the Central Police Station on Irwin Road is more than 200 years old and was the residence of Arthur Wellesley between 1799 and 1801 after the fall of Tipu Sultan. The neighbouring Government Guest House is yet another iconic building of the city.

Christian Missionaries also had large architecturally beautiful buildings such as Victoria Girls School building on the other side of Sayyaji Rao Road, two Bartholomew Church buildings and the Wesleyan Press on Bangalore-Nilgiri Road. The Catholic Church had its iconic St. Philomena’s Church and very large swathes of lands with Philomena’s  School, College, Bishop House etc. Most of these buildings were built with distinct architectural designs. Many of these buildings came up at different times. And there were many private buildings in the city centre — Dodda Pete, Sayyaji Rao Road and the Irwin Road — built in symmetry with the grand public buildings giving the city centre a look of dream city.

To add further beauty to some of these buildings were Dufferin Clock Tower, Silver Jubilee Clock Tower and big clocks on the towers of some public buildings such as Vani Vilas Market, to act as the time-keepers of the city.

In the subsequent years these buildings have become the grand heritage of Mysore.

Makkaji Chowk, an area between Sayyaji Rao Road and Dodda Pete became the commercial hub with shops which catered to every need of the public. Hotels, cinema houses, schools,  beedi shops and snuff  shops, watch shops and the cycle shops, cloth shops and ready-made garment shops, shoe shops;  even arrack shops were there.  One got here anything and  everything one would want.

Eradu Vare Aane  Galli, a small cleavage between Makkaji Chowk and Sayyaji Rao Road was market for the poor and the common man. War-time buses dislodged its rural passengers here. Magicians performed their tricks here.  This was the Maya Bazar which spawned the idea of ‘Malgudi’ in the mind of R.K. Narayan.

Early in the mornings the main roads were cleaned and watered by water tankers; solid wastes were systematically collected and shifted to far away dumping yards to be converted into fertilisers. Thus, Mysore was a city with distinctive history and heritage.

At the dawn of Independence, the rule by the Royalty in the State was replaced by a rule by the Republic. Consequently, Mysore lost its royal patronage. The new Government shifted the State capital from Mysore to Bangalore.  This transition brought a metamorphic drift in the fate of Mysore. Further, the 1956 State Re-organisation not only enlarged the State’s geographical boundaries, but it also thoroughly changed its socio-political ethos.

Mysore was the darling of ‘old’ Mysore State. But for the people and its representatives of ‘new’ Mysore State, it was Bangalore, the new seat of power that mattered. And this transition was the tipping point in the history of iconic Mysore.

14 COMMENTS ON THIS POST To “Has Mysuru gone Bengaluru way?—6: Iconic Mysore and its Tipping Point”