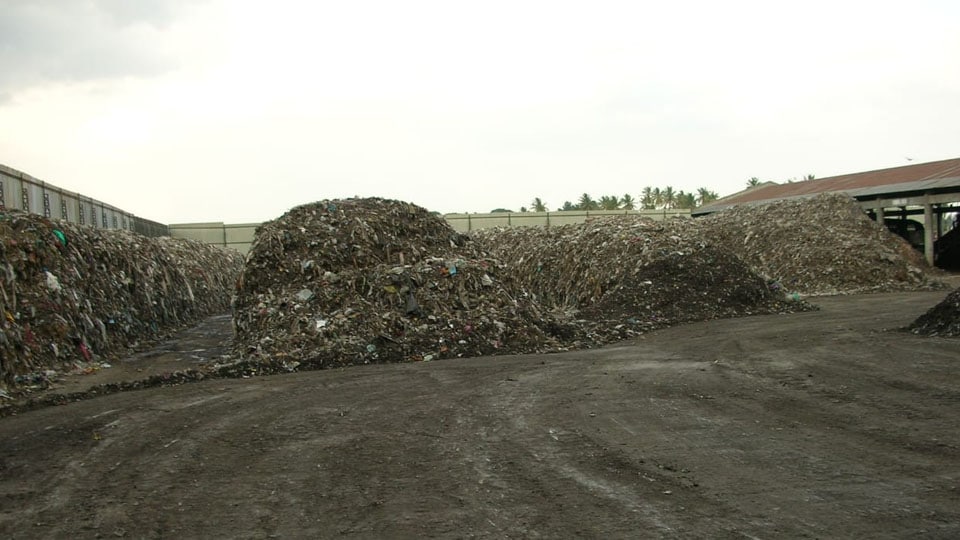 Delayed Decision will be Disastrous

My stint with Mysore Grahakara Parishat (MGP), particularly between 2013-2016, provided me with opportunities to study civic issues of the city. That period also happened to be the period of dialogue on Mysore Master Plan-2031, with Mysuru Urban Development Authority (MUDA) and Mysuru City Corporation (MCC).

Solid Waste Management (SWM) was one of the priority issues we studied. Therefore, the present political slugfest compelled me to re-visit SWM problem and the disaster that may happen due to unnecessary and wanton delay in taking appropriate and immediate decisions in this regard.

Genesis of the problem

In 1996, a centralised Solid Waste Management Unit was to be set up under the Asian Development Bank (ADB) aid. In keeping with the trend of the time, a tender was called and it was awarded to a Mumbai firm under Public-Private Partnership (PPP) model. Thus the Excel Plant was put up in the then Sewage Farm at Vidyaranyapuram. At that time, there were no residential clusters around it and Industrial Estate came up near it.

This PPP arrangement worked for about 10 years and despite several periodic extensions, the Mumbai firm lost interest and sublet its operations to a local person.

In the meanwhile, the city grew bigger. With this growth the civic problems grew in geometrical proportions. SWM was one of them. The delivery of solid waste to the Excel Plant increased beyond its capacity exactly at a time when its management was defaulting and murky. And the dumps of untreated solid waste started growing into big hillocks, competing with the adjacent Chamundi Hill. Luckily the area available in the farm was big enough to continue to grow up these hillocks.

That was also the period when new extensions were developed by the MUDA close to this Sewage Farm and several multi-storied apartment complexes too came up around this area.

Failure of decentralised SWM under JNNURM

If it was ADB aid which facilitated the setting up of Excel Plant, the city had to wait next 15 years for any further modifications in this arrangement. The opportunity came under JNNURM funding for setting up of 10 decentralised SWM Units around the city. The fundamental idea behind it was to eliminate unnecessary costs- over-runs in shifting the city’s solid wastes from faraway residential areas to one centralised processing unit at Sewage Farm in Vidyaranyapuram. Then it was thought that the piling up of stench spreading waste dumps will gradually be reduced and will not pose any health problems for the residents around it.

The decentralised SWM Units were launched with a lot of fanfare. But some of these units became dysfunctional from the very beginning. One located at the burial grounds between V.V. Puram and Gokulam became victim of political discord, presumably due to its close location to the burial ground and has remained dysfunctional ever since.

Two such units were located within the Manasagangothri campus  under “oral agreement”  between the MCC and the Mysore University that it would be used to process solid wastes from Gangothri Layout, part of Kuvempunagar along with the waste from the campus. But the University refused to permit processing of wastes from outside the campus.

Some of the other units did work under agreements with NGOs but stopped functioning after a few years. Only the unit located in Kumbarakoppal worked under an NGO, and mainly so due to the leadership of a dedicated political leader, D. Madegowda, former MLC and ex-CITB (MUDA) Chairman.

The failure of functioning of most of these decentralised solid waste processing units ultimately increased the dumping of waste in Vidyranyapuram Excel Plant. The dilapidated Excel Plant processed far lesser than its original capacity, and that too with frequent closures and break-downs.

The consequence was speedy increase in the dumps on Vidyaranyapuram Sewage Farm! The present problem starts from here.

Protecting citizens’ interest should be supreme

Dr. M.R. Ravi, the then MCC Commissioner, had planned several alternative solutions to this gigantic stench dumps. He had invited a firm which wanted to convert this waste into energy on PPP model. But his truncated service period deprived the city of a possible solution.

At present, Pratap Simha, MP from Mysuru-Kodagu Constituency, is said to have moved a mountain of administrative rigmarole and is said to have come out with some possible solution. It is most unfortunate that this effort also is confronting political obstacles, and that too from his own party member! In democracy, citizens’ welfare should prevail over whims of political leaders.

Mysore Master Plan-2031 had agreed with the MCC’s proposal to have a landfill in 110 acres of land in Bettadabeedu village in H.D. Kote Taluk. Since the Vidyaranyapuram dumping yard has gone beyond its total capacity, areas around this land have become residential clusters and these huge pile-ups have become serious health hazard to the people living around it. It is time to immediately take a decision to shift the dumps to the new landfill point.