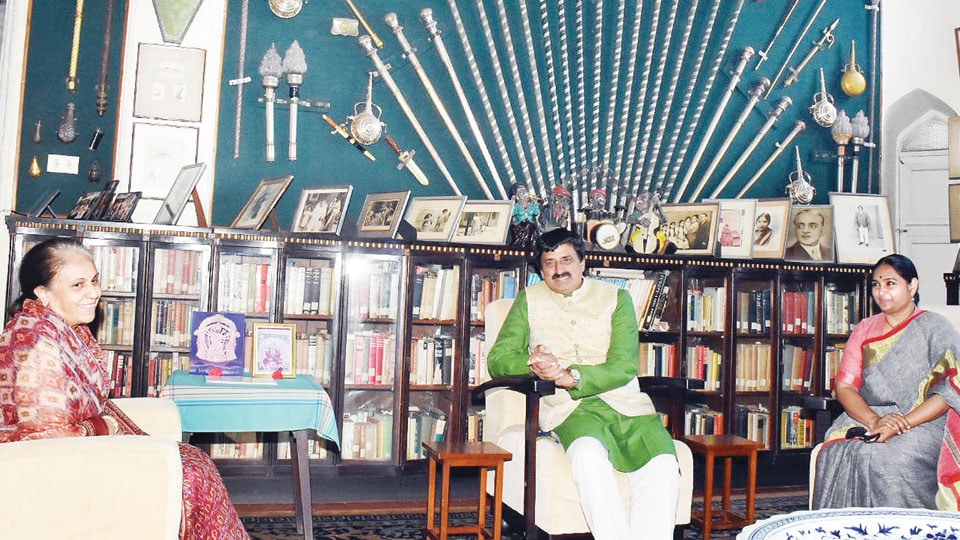 Mysore/Mysuru: Days after Minister for Tourism, Ecology and Environment C.P. Yogeeshwar said that Heli Tourism would be launched at four tourist destinations including Mysuru, the Minister held important discussions regarding setting up of two permanent helipads at Lalitha Mahal Palace Grounds in Mysuru and on the premises of Bangalore Palace (Palace Grounds). These helipads would be exclusively used for Heli Tourism.

The Minister was on a visit to Mysuru this morning where he held a closed-door meeting with member of erstwhile royal family Pramoda Devi Wadiyar regarding the two helipads on the lands that are owned by the royal family. Karnataka State Tourism Development Corporation (KSTDC) Chairperson Shruthi Krishna was also present at the meeting. He sought inputs from Pramoda Devi Wadiyar on his ideas for developing Mysuru into a prominent tourist hub.

Though media persons were not allowed inside the meeting, sources told Star of Mysore that the Minister spoke about the construction of helipads so that there is a smooth movement of tourists between Mysuru and Bengaluru, especially during Dasara.

Later Yogeeshwar told reporters that in Mysuru, the Lalitha Mahal helipad is ideal and in Bengaluru, it is Palace Grounds as there is only one helipad at HAL that belongs to Defence Forces. “Pramoda Devi Wadiyar has consented to grant permission for helicopters to land and take off for Heli Tourism,” he said.

Speaking to reporters, the Minister said that he had plans for developing tourism in Mysuru region. He said that he had met the Swamiji to seek his blessings and also his advice on boosting tourism in Mysuru region. “Mysuru is globally known for its sandalwood, silk, handicrafts, sweets (Mysore Pak) and many other products. I will work on this fame for promoting ‘Brand Mysuru’ in the global tourism map,” he said.

Replying to a query on whether he had sought in-charge of Mysuru district, Yogeeshwar replied in the negative and said that he was more interested in getting in-charge of Ramanagara, his home district.

He said that he had met Chief Minister B.S. Yediyurappa last week and sought allocation of more funds for the Tourism sector. “I have discussed about tourism revival plans for Mysuru region. Karnataka is lagging behind in the tourism sector when compared to Northern States,” he said.

Stating that  as an actor in the past, he will  also use his film industry experience for promoting tourism, Yogeeshwar reiterated that plans will be scouted and sourced for making Mysuru ‘Brand tourism.’ Mysuru Palace Board Deputy Director T.S. Subramanya, Zoo Authority of Karnataka Chairman L.R. Mahadevaswamy and other local BJP leaders were present.