Home » News » Helipad Locked ! Where will the VIPs land now ? 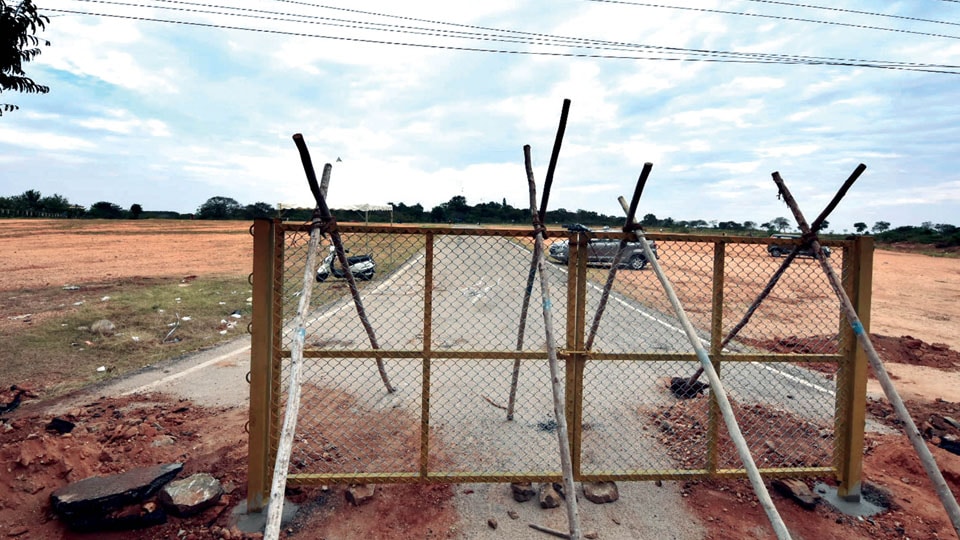 Helipad Locked ! Where will the VIPs land now ?

Mysore/Mysuru: Just a day before the dawn of the new year, a gate has sprung up overnight at Lalitha Mahal Helipad area much to the surprise of morning walkers.

The iron gate has been installed right at the entrance of the road leading to the helipad. While the MCC did not have clarity as to who installed the gate, a nameboard beside the helipad reads “This land is the private property of P.D. Wadiyar and  legal action will be initiated against anyone found trespassing  or conducting  unauthorised  transactions — Palace Estate Officer-Mysuru.”

It is learnt that following a Court order in favour of a private party, the area adjacent the helipad was secured with barbed wire fencing.

Now, an iron gate and the nameboard has been installed  in the helipad area, which has  left the authorities perplexed.

The Lalitha Mahal Helipad is the only public helipad in city and the other two sites to land a helicopter are — Infosys campus and Mandakalli Airport. Now, with Lalitha Mahal Helipad fenced and gated, one wonders where the politicians and VVIPs will land as the other two landing sites are far from the city centre. Also, with the helipad area  being locked up, it is going to effect various other activities specially during Ashada Fridays when the sprawling grounds is turned  into a parking area for the vehicles of thousands of devotees, who visit Chamundi Hill Temple.

Apart from this, the Lalitha Mahal Helipad area is also used to host the now popular annual kite flying contests, heli-rides during dasara and even motor sports.

Now, it is to be seen how the MCC will respond, as in recent times many private parties have won their cases in Court regarding ownership of the land in that area. Interestingly, the  govt. has not yet appealed against the verdict. Will it?