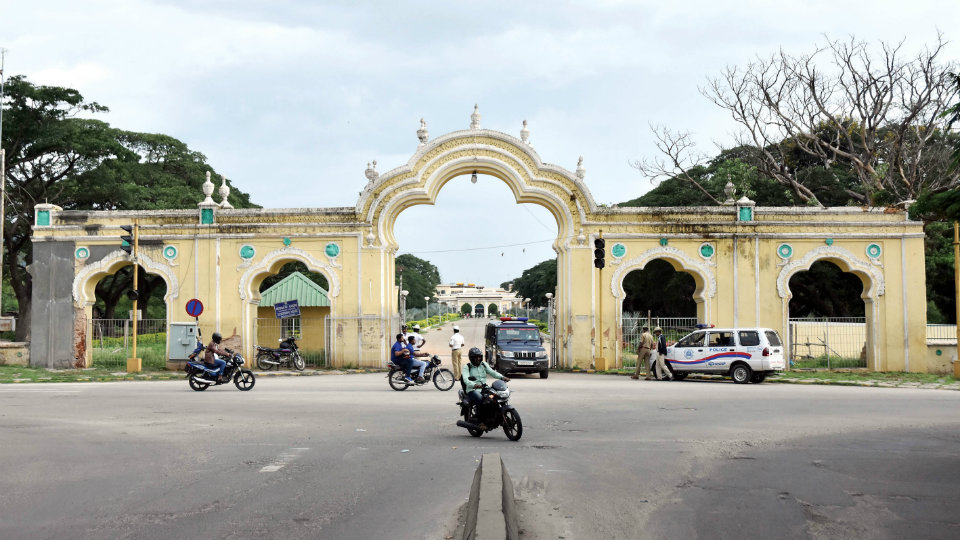 Mysuru, Sept.1 (MK&NNN)- Entrance to a city is key to its culture and heritage and Mysuru is endowed with such an entrance as it has the beautiful backdrop of Chamundi Hill.

Apart from being home to many heritage buildings and structures of historical value, Mysuru is also known for its majestic arches, pillars and gateways. These architectural marvels, which are a treat to watch, are the gifts from Wadiyars, the erstwhile rulers of Mysuru.

Having given importance to art and culture, Wadiyars made sure to leave behind many impressive structural marvels and they today stand as a Royal stamp, reflecting their grandeur and aesthetic sense. Among these structures are marvellous arches and gateways which are built in front of some of these heritage structures in Indo-Sarcenic style.

However, of late, when visitors and tourists enter Mysuru by road from Bengaluru and drive from Ambedkar Circle (FTS Circle) towards the Rural Bus Stand, a little distance away they are confronted with a peculiar sight of a heritage Arch Gate standing like an orphan.

Yes, this is the heritage North Gate Arch, the entrance arch to the famed more than 150-year-old Government Guest House. With the grant from the State Finance Commission (SFC) the Mysuru City Corporation (MCC) has taken up the widening and development work of Abba Road from Five Lights Circle to Hyder Ali Road into a six lane road. MCC has taken permission from the Government to use the land in the Government Guest House premises for development. However, the work from Five Lights Circle to Karnataka Police Academy (KPA) only has been taken up.

The work on the damaged historical arch as per the heritage building protection norms without demolishing and damaging its originality as per the guidelines laid down by Department of Archaeology, Museums and Heritage will be taken up by the Department itself. However, what one can see now is throwing all norms to the wind and plastering the walls using cement. But the engineers concerned had turned a blind eye against this attack on heritage structure.

Meanwhile, following complaints of damage to century-old North Heritage Arch Gate at the entrance of the Government Guest House and shoddy restoration works done by MCC, District Heritage Committee had visited the heritage structure and taken stock of the damages that have been caused during road repair works.

The magnificent Government Guest House is a heritage building and one of the major attractions is its entrance arch through which Viceroys in the past, Presidents, Vice Presidents, Judges, Governors, and Chief Ministers entered and stayed at the Guest House and held meetings.

But now, they have to enter the Guest House through this orphaned Arch Gate. Also this has now turned into an eyesore for everyone driving through the place. Dasara is fast approaching and thousands of tourists are expected to pass through this place. Looking at things that are moving at a snail’s pace and lacklustre way, it is sure that tourists will surely see this pathetic sight.

There are now instructions to illuminate all circles and important heritage buildings. But if this Arch Gate is illuminated it will only expose the stupidity of the authorities concerned.

District Minister V. Somanna has already held many meetings in the Government Guest House. Has this sad condition of the arch gate not come to his notice? Even now it is not too late. Steps can be taken to somehow make this heritage Arch Gate the pride of Mysuru once again.

Heritage Arch Gate STILL
Travel to iconic KRS on a shoddy road
Convention of vehicle drivers from unorganised sector in city on Sept.4