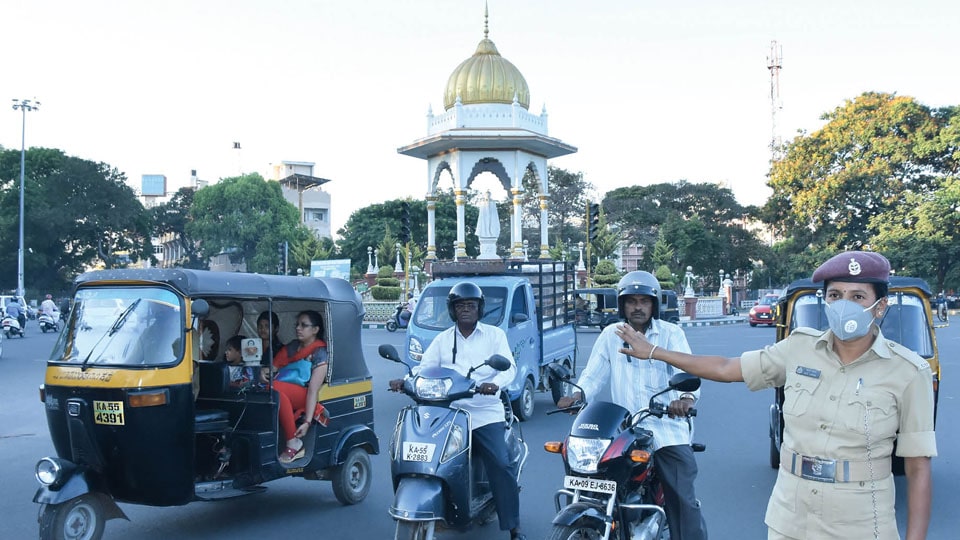 Mysuru/Mysore: Their slogan is ‘Nishkam Seva’ meaning Honorary Service. Trained in first aid, emergency relief and disaster management, they assist Police in various situations — all for a meagre salary of Rs. 380 per day.

The Indian Home Guard is a volunteer force tasked as an auxiliary to the State Police. The job of a Home Guard is considered voluntary service to the nation. However, in reality it is the only source of income for most Home Guards.

A pillar of support for the Police, Home Guards say it’s them who have always suffered the most. Home Guards are governed by the Home Guard Department of the State and do not have a fixed monthly salary. They are instead paid on the basis of the number of days they have worked.

Originally established in 1946 in the erstwhile Bombay province after the Second World War, Home Guards were later conceived and raised to serve as auxiliary service to the Police and help maintain internal security all across the nation. Currently, there are 26,449 Home Guards (22,282 men and 4,167 women) in the State, of which 1,300 are serving in Mysuru district and 528 of them in city.

Home Guards manage traffic and assist Police to maintain law and order in situations such as bandobast during festivals and other such events. They also have to do night duties during emergency call-outs such as floods, election work, law emergency and other emergent tasks.

Wearing a Khaki dress, they do work hand-in-hand with Police force, but only once in a year, a Khaki pant and shirt and a pair of woollen socks are given to them and a belt once in two years. In case of wear and tear, they have to bear the cost. At most, a pair of shoes of any brand would last for one year but in their case, authorities provide them shoes once in four years. In the last 30 years, these basic amenities such as uniforms, shoes and belts have never reached them on time.

They control traffic under the scorching sun. But there is no medical facility available to them which the Police force has. In case of death while on duty, Rs. 3 to Rs. 5 lakh will be given to the dependents and in case of any accident while on duty, Rs. 20,000 to Rs. 25,000 will be given as treatment expenditure. If they become 60% handicapped following such an accident, Rs. 2 lakh will be given. Home Guards work for a meagre salary of Rs. 380 per day. There is no provision of Provident Fund and no medical or accommodation facility.

According to the rule book, each Home Guard will be on duty only 60 days a year. But in practice, they are employed whenever necessary, throughout the year. In some cases, Police have even used them as orderlies and assigned the most menial tasks possible to them.

Speaking to Star of Mysore, a female Home Guard shared her plight. “We have a number of issues. While working in other towns or villages on duty such as election work and bandobast, accommodation facility is not available to us. Most of us are from poor families. What else we can do? We have to do our duty to earn some money and take care of our families,” she said.

Recently, State Government had announced that wages of Home Guards will be raised to Rs. 750 per day, but this is applicable to only those who are doing duties that are reserved for Police Constables in the Police Department and wages for all the remaining Home Guards would continue as before.