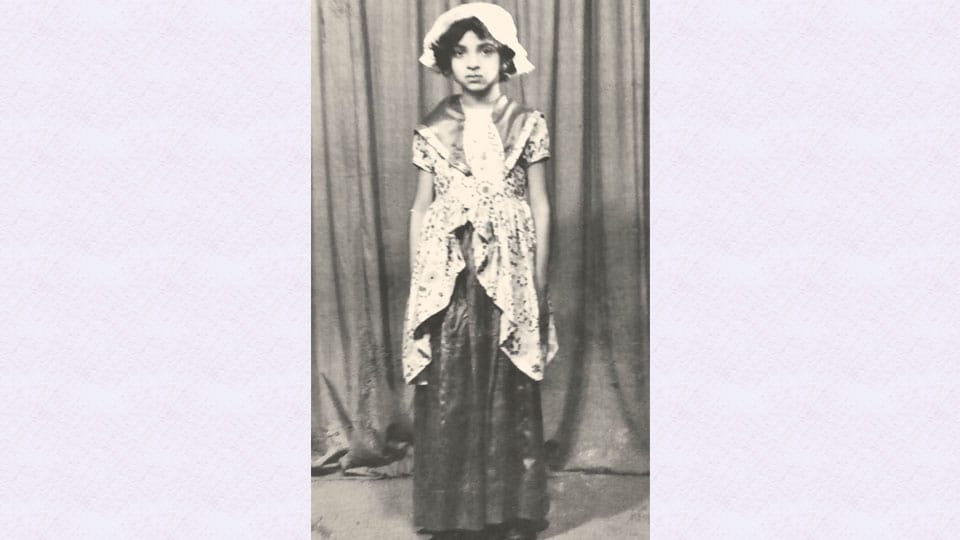 Home Schooling – My Own Experience

During the Corona lockdown children have been receiving lessons at home online. I recall my own “home schooling” in Mysore seventy-eight years ago; the loneliness I felt then maybe shared now by the children who are kept at home.

I joined the Good Shepherd Convent in Mysore in 1943 when I was five. Dressed in the navy blue school uniform, hair fastened back with clips, face powdered with baby powder, I was driven in my father’s green Standard car from our home, past the Railway Station, up Irwin Road and the Arch of Government House, to the Convent. I had just got to know the other children and the nuns, Mother La Salatte and Mother Dominic being my favourites, when my school going days came to an end.

It was the day of Kite Festival. I had a rectangular kite in red and yellow. It was called a “Goranti Pata” [“Pata” is Kite in Kannada] and reputed to make a buzzing noise in full flight. My father and I pasted two eyes cut from black paper on it and attached a long streamer  [tail or “bala” in Kannada] to it. Thimmanna, a Railway Peon, glad of a change of duties, offered to help me fly it. A strong wind blew it to the periphery of Yadavagiri then a stretch of furrowed red earth and rocks sloping down to the Railway line. A crematorium [now called “Jodi Thengina Mara” or a Pair of Coconut Trees] lay beyond the tracks. Funerals then were held under the trees. Puffs of smoke belched through the dense foliage; or the baleful red of a burning pyre would glow amid the tree trunks. The kite, damaged beyond repair, snagged on the hoary frangipani tree that still stands outside the house of R.K. Narayan, now a Museum.

I fell sick that day. What seemed an ordinary childhood ailment continued unabated for many days. “The kite’s black eyes have cast the evil eye on her,” said some. “She was flying her kite near the Smashana [burning ghat] and has taken fright,” whispered others. A cow, black to its teats, was brought to be fed bowls of crushed jaggery, black sesame and other bovine delicacies to bring me luck. Amulets called “Yantra” from temples and even a “Taweez” [talisman] from a Muslim Saint were offered.

My attending school was stopped and mother nursed me back to health. “Home schooling” began with mother teaching me English, History and Geography. I still have the notebook in which she copied, by hand, some  poems I had enjoyed reading. I loved Robert Browning’s “Pippa Passes” best.

By passing the Lower Secondary exam privately at the age of eleven, I could later attempt the SSLC exam the same way. Without the three language formula of today, only English and a “Second Language” were required. All of us were rejoicing in India’s new-won Independence. So Hindi, the national language, was chosen as my mother-tongue.

Sudarshanachar, a private tutor, started me on the Devanagari script when I was nine. A  young man, he was a Gandhian, dressed in khadi and wearing a Gandhi cap. He had thick black eyebrows. I realised later they formed an unbroken band right across his brow. He would shave a strip between them to accommodate his red Naamam, his Iyengar caste mark. He helped me appear for the exams of the Dakshin Bharat Hindi Prachar Sabha. As I progressed, we read the “Ramayana” of Munshi Premchand [Dhanpat Rai Srivastava]. I also enjoyed some comical pieces by other authors. The teacher too would laugh and share the fun with his pupil. Years later, I met him on a Mysore city bus.  Though he remembered me with undiminished affection, his memory was vague.

School Head Master, Rangaswamy, agreed to teach me Physics and Chemistry. He was a short-tempered and strict man of whom I was in awe. I had no access to any laboratory so Chemistry was a problem. I read about beakers and retorts and copied diagrams from textbooks. I was probably one of the few students appearing for a Science exam without ever entering a laboratory.

Drawing and painting as a subject for the SSLC was an option. Artist Sadashivachar began my lessons a year before the exam. An elderly man, he had a scarred and inflamed face, said to be a result of an infection of “Barber’s Itch.” After his departure, I would disinfect the brushes, pencils and even erasers. Mother kept a supply of Potassium Permanganate crystals to wash fruit and vegetables, fearing infections. Her “Pinky” or “PP” was a family legend. I used it liberally.

On the day of the exam, a bunch of bananas was set up as a still life. We took our own materials, but paper and jugs of water were provided. As I started to paint, the yellow colour spread all over the paper…it was absorbent paper for blotting instead of drawing paper. The right kind of paper was provided later with half-an-hour extra time to compensate.

Hiring three private tutors was considered by some to be an extravagance. In those days, Sudarshanachar and the other teachers requested a modest Rs. 15 a month as tuition fees. The invaluable knowledge and skill these gurus gave to a lonely, home-bound child were beyond price. They enabled me to join the Junior Intermediate Class of Maharani’s College as a successful product of home schooling.

Girija Madhavan LOOKING BACK
Thank You
Book launch in city on Feb. 18