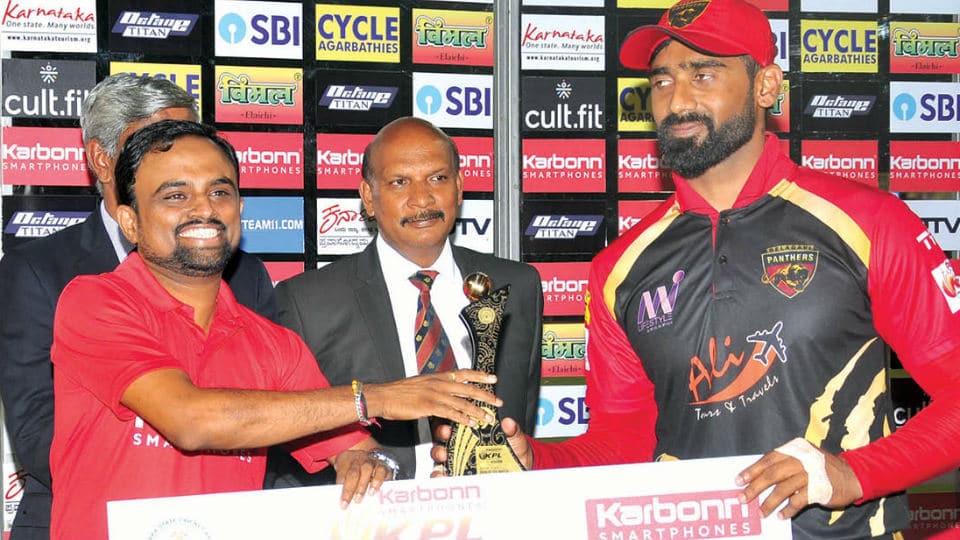 Stalin Hoover scored a 43-ball 62 to help set Ballari a target of 155 before K. Gowtham’s 4 for 23 helped restrict them to 129 for 9 at the SDNR Wadiyar Ground in Mysuru. The victory helped Belagavi jump past Hubli Tigers to the top of the table.

Put in, Belagavi got off to a blistering start thanks to Hoover’s belligerence. He was dropped on 11 off Amit Verma and it proved costly. To drive home the point, Hoover hit consecutive boundaries, including a six, off Bhavesh Gulecha in the next over. His partner, B.R. Sharath, fell to Gulecha and K. Gowtham (5) didn’t last long either, but Hoover just carried on, notching up his half-century off just 32 balls with a six off I.G. Anil in the ninth over.

Manish Pandey, at the other end, scored an adventurous 12-ball 24 before holding out to Anil. Two balls later, Hoover holed out as well, having scored a fine 43-ball 62. At that point, in the 13th over, Belagavi were 111 for 4. With his dismissal, the run-rate slowed down.

Rakshith scored a fighting 13-ball 14, but the rest of the line-up failed to back him up, all falling for single digit scores. It meant Belagavi were bowled out for 154, with two balls remaining, Prateek Jain ran through the tail to return with the figures of 3 for 29.

The total didn’t seem too threatening at the outset, but Belagavi were excellent with the ball. Ballari took things slow, knowing the target wasn’t too daunting. Unfortunately for them, Belagavi dismissed their batsmen before they could do significant damage.

All the while, Pawan kept the scoreboard ticking, although not as fast as he would have liked. When C.M. Gautam (11) failed to get going as well, bowled by S. Arvind, Belagavi knew it was their day.