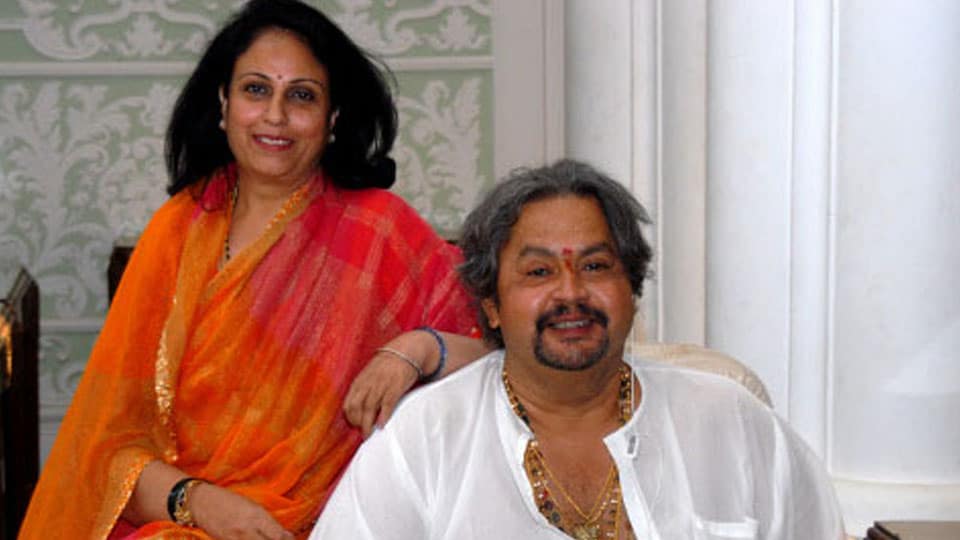 The Dasara tradition traces back to Raja Wadiyar who, following the pomp and pageantry of the Vijayanagar rulers, started the Dasara celebrations in 1610 at Srirangapatna. Continuing this legacy today is Rajamata Pramoda Devi Wadiyar, who is a part of the celebrations since 41 years. Sitting on the sofa next to the one where her husband’s framed photograph is kept, with the late Wadiyar in smartly attired suit in a reflective mood, in the inner hall of the Mysore Palace surrounded by walls of books that had titles ranging from nature, music, garden, Geography of Strabo, Myths and Legends of China, Homer, Shakespeare and huge Webster New International dictionaries, a relaxed looking Pramoda Devi reminisced about the 41 years of Dasara that she has been a part of. “I was married into the Wadiyar family in 1976. In the beginning my mother-in-law used to guide me and my husband the late Srikantadatta Narasimharaja Wadiyar followed all the rituals associated with it having learnt everything from his father Jayachamaraja Wadiyar,” said Pramoda Devi, speaking to Star of Mysore on the eve of commencement of Navaratri.

Star of Mysore (SOM): How much had things changed or remained the same in these 41 years?

Pramoda Devi: It is very difficult to admit but the zing is not there and if you understand what I mean, whatever I am doing now is like a follow through action. It is like a batsman who can score a six or a four only when he completes the follow through. Otherwise, the shot lands inside the boundary or he can even get caught out.

SOM: Is there a demand for passes to watch the Durbar?

Pramoda Devi: The biggest problem we face today is the constraint on space. Added to this, the family has grown and it becomes very difficult to accommodate all of them.

SOM: The Government has given you Rs. 36 lakh for Dasara celebrations. What is it for and has the amount increased?

Pramoda Devi: It is for the Golden Howdah. It is the personal property of the royal family. Earlier, my late husband was its owner. Now it is my personal property. I did not make any demand for increasing the royalty nor did they volunteer.

SOM: Has the tradition been continued all these years without any change?

Pramoda Devi: I make a mental checklist and everything is in place by the time Dasara festivities commence. My husband had great love, respect and admiration for his father. He always used to say that his father (Jayachamaraja Wadiyar) was in a different league. However, I must also admit that due to Palace intrigues some things did not go right later.

SOM: Have you experienced such Palace intrigues?

Pramoda Devi: One must admit and accept that conspiracies and intrigues become a private matter, which one has to deal with in such a situation. It is human nature. Had not the great Kaikeyi been influenced by Manthara, her maid to believe that the throne belonged to her son Bharatha and that her step-son Rama should be exiled to the forest. If this had not happened, then there would have been no Ramayana.

SOM: What is your view about Mahabharata?

Pramoda Devi: I think Mahabharata is something where each character in it fits the common people in all of us. It shows how one can get carried away. Why is it that Abhimanyu, in spite of having his father Arjuna the greatest archer, Krishna, the God and his uncles Dharmaraya, Bhima, Nakula and Sahadeva on his side, had to suffer the fate? Only conclusion that one can come to is, it was all the life span he had.

But for me Karna is one of the greatest characters. Imagine, his mother Kunti, who had abandoned him soon after his birth, comes back to ask him to spare his sons. What thoughts must have gone on in the mind of Karna.

SOM: Could your late husband or even you stopped this lineage and tradition?

Pramoda Devi: If my husband did not want to continue, he could have stopped it all. But he chose to struggle in spite of financial troubles. His mother wanted him to continue and he did it. Now, I have done this voluntarily by adopting Yaduveer. I have never craved for fame, glitz and glamour and neither did my husband ever do. We have always felt that we are trustees of all the wealth of the dynasty and we have to protect it. The late Wadiyar never swayed from this path till his last breath. 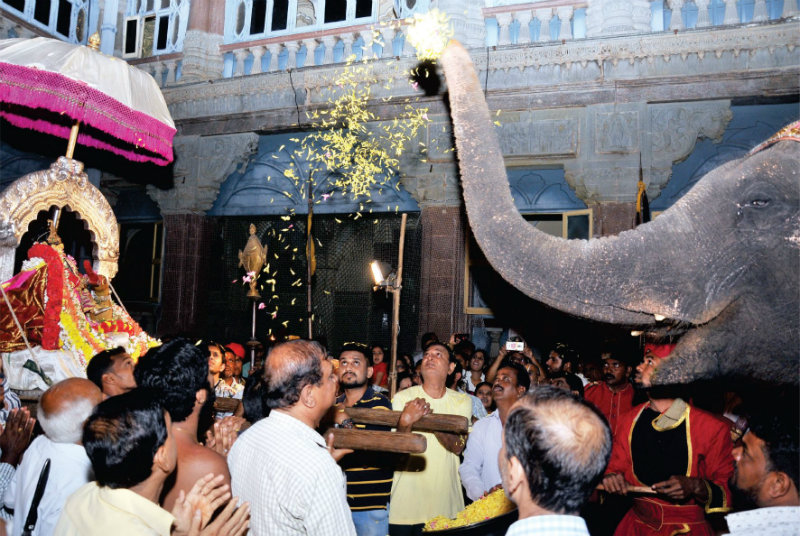 [It was time for Pramoda Devi to receive the prasada of Sri Krishna and I took leave of her. Krishna Janmashtami is celebrated in the Palace by placing the idol on the chariot and taking it around the courtyard. The Palace elephants come one by one and offer obeisance by picking the flowers from the trunks and showering it on the idol, even as Rajamata Pramoda Devi, her son Yaduveer Krishnadatta Chamaraja Wadiyar and his wife Trishikha Kumari watch it with great devotion and respect.]