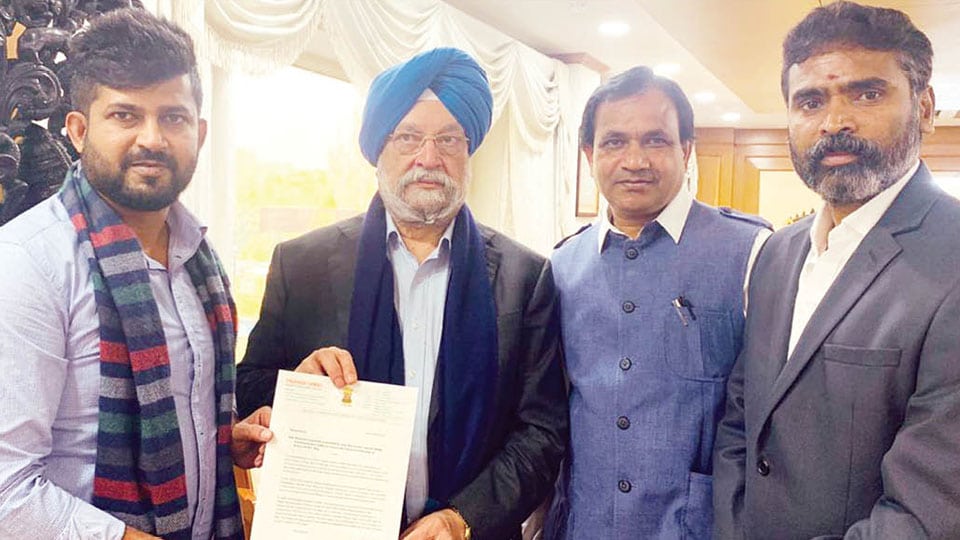 IAF’s helicopter base will not be shifted to Mysore Airport

Mysuru/Mysore: The Indian Air Force (IAF) Helicopter Training Centre at Yelahanka in Bengaluru will not be shifted to Mysore Airport at Mandakalli.

This was assured by Hardeep Singh Puri, Minister of State for Civil Aviation in New Delhi this morning. The Minister was responding to an appeal by Mysuru-Kodagu MP Pratap Simha not to shift the IAF Helicopter Base to Mysuru.

Meeting the Minister, Pratap Simha informed him that there have been speculations regarding IAF taking over the Mysore Airport and convert it to its Helicopter Air Base. “Currently Mysore Airport is witnessing a surge in passenger movement with the implementation of Ude Desh Ka Aam Nagarik (UDAN) scheme and the passenger flow has increased seven fold since the implementation of the scheme.”

“Since Mysuru is known as the Cultural-Heritage Capital of Karnataka, passengers are attracted for the tourism experience of the city. Additionally, Mysuru is also now attracting industries with the establishment of IT majors and various automotive ventures. And in such a situation, handing over the Airport to IAF will hamper the growth of the city and will affect the tourism potential of the entire region,” the MP reasoned.

In his memorandum, Pratap Simha stated, “If the Airport is taken over and converted to a Helicopter Base, it will bring restrictions in several forms similar to Pune and Bagdogra Airports to ensure National Security by safeguarding Defence equipment that would then be housed at the Airport. This will in turn, restrict the      airport growth.”

“The aviation growth in Mysuru is unstoppable in view of tourism and business investments and the Airport growing as a major civilian Airport is very essential for futuristic growth of Mysuru,” Simha added.

Responding to the MP’s request, the Minister ruled out any such proposal and even called the Airports Authority of India (AAI) Director over phone and informed him that such proposals must not be taken into account in the interest of growth of any particular city, especially in Mysuru where the Airport plays a crucial role in  tourism development.

It may be recalled here that in 2018, the then Chief Minister H.D. Kumaraswamy had urged the Centre to shift the IAF Helicopter Training Centre from Yelahanka   to Mysore Airport.

The IAF had conveyed to the then CM Kumaraswamy that it would develop the Mysore Airport on the lines of Airports in Pune, Chandigarh and Srinagar.

In its proposal, the IAF had stated that it will develop the Mysore Airport with its own costs and make available facilities for both civil and military use. This will considerably reduce the pressure on the Kempegowda International Airport in Bengaluru, the IAF had said.

After the then CM’s proposal, the State Government gave its  No Objection Certificate for the use of Mysore Airport. Since the Airport comes under the jurisdiction of AAI, Kumaraswamy’s request was pending with AAI. Now the proposal has been shelved.

MP Pratap Simha also urged Minister Hardeep Puri to put the Mysore Airport Runway expansion on fast track mode. “The proposal of extension of runway from 1,740 metres to 2,750 metres is pending since many years,” he told the Minister and sought his personal intervention to speed up the works so that wide-bodied aircraft Airbus-320/321 can take off and land from Mysore Airport.