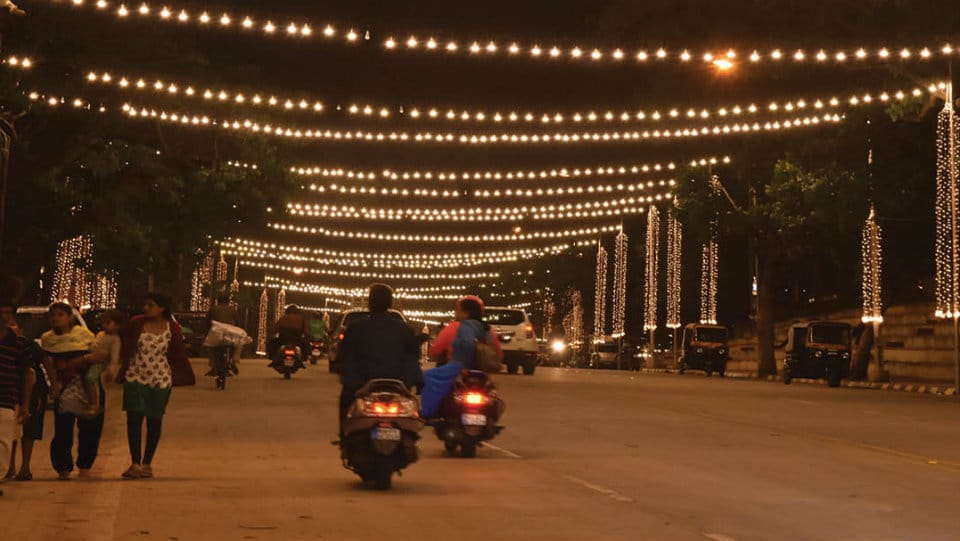 Mysuru:  Carelessly installed serial lights for Dasara illumination resulted in a bike rider getting injured after he fell from his bike on Hunsur Road and a girl student suffering electric shock at Yuva Sambhrama yesterday.

In the first incident, 42-year-old T.N. Jnanesh, a resident of Srirampura, who was proceeding on Hunsur Road, was injured after he lost control of the bike and fell down as the LED serial lights wire got entangled to his neck near Paduvarahalli signal light. He has been admitted to a private hospital.

V.V. Puram Traffic Police said that a truck had passed on the road and the wire was cut by a loaded truck and was dangling very low. Jnanesh, who was coming behind the truck, did not notice the wire and the wire got entangled to his neck.

In the second incident, a girl student suffered electric shock at Open Air Theatre, the Yuva Sambhrama venue in Manasagangothri. The student was from CPC Polytechnic. She was immediately rushed in a Police vehicle to a private hospital.

She is recovering from the shock and would be discharged from the hospital today, said Yuva Sambhrama Sub-Committee President Jayashankar. It is learnt that a group of students had assembled behind the stage to present their programme when a serial light wire came in contact with the girl.