Home » News » In Dance of Democracy, Mandya is Super Star 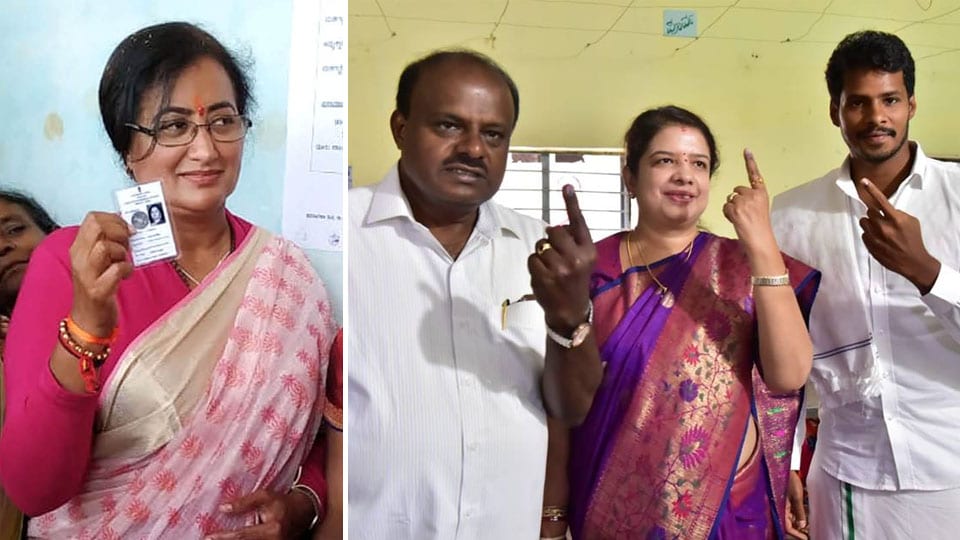 In Dance of Democracy, Mandya is Super Star

Thousands of women from hinterlands push up voter turnout to a surprise 80.23% !!!

Mandya: The first phase of polling in 14 Constituencies of Karnataka went off peacefully and yet again, Mandya was the most-watched contest and in the test of democracy, the Constituency passed with flying colours. True to its top billing, Mandya, where Chief Minister H.D. Kumaraswamy’s son Nikhil is pitted against late actor Ambarish’s wife Sumalatha, recorded an unprecedented 80.23 percent polling — the highest in the State for Parliamentary polls since 1950s.

Notably, women turnout was massive in Mandya and even Kumaraswamy had sarcastically remarked that the media had given more electoral coverage to Sumalatha than Prime Minister Modi. Polling that began on a sombre note in the morning picked up pace as the day progressed and by afternoon, it crossed 50% mark, touching 80.23% by evening.

High voting percentage was reported in hinterlands of Mandya particularly in Doddarasinakere, the birthplace of Ambarish and surrounding areas. The high voter turnout, specifically of women, has given rise to the theory that Sumalatha’s candidature has struck a chord with them.

In 2013 by-poll, Mandya registered 58.24 percent polling. Actress Ramya was elected and as many as 9,42,451 voters had exercised their franchise.

The voter turnout dramatically rose to 71.45 percent in 2014 where C.S. Puttaraju of JD(S) got elected by defeating Ramya. As many as 11,98,632 voters had exercised their franchise.

In 2018 Parliamentary by-polls, Mandya registered 52.99 percent polling where JD(S) candidate L.R. Shivaramegowda was elected by trouncing BJP candidate Dr. Siddaramaiah with a record of margin of 3.25 lakh votes. JD(S) which contested this by-poll after entering a pact with Congress registered an increase of 19.84 percent votes when compared to previous voter turnout. As many as 5,69,347 voters had voted in this election.

Road shows by these popular leaders and actors, open call by Sumalatha to elect her with a record margin of votes to uphold the dignity, self respect and pride of Mandya besides to overthrow dynastic politics are said to have played a crucial role for the record  voter turnout.

In a befitting finale to the high-voltage campaign, yesterday’s polling day witnessed some skirmishes between Sumalatha’s and Nikhil’s supporters. The arrival of Nikhil at a polling station triggered emotional outpouring among Ambarish fans who chanted “Nikhil go back”.

Nikhil’s supporters too responded with “Nikhil ge jai” and a scuffle broke out when Nikhil was garlanded by his supporters. Sumalatha’s fans objected to Nikhil’s presence at a time when the Election Commission had not permitted Sumalatha to even speak to her supporters.

Nikhil had arrived at the polling station along with Transport Minister D.C. Thammanna and the two sets of supporters pushed and shoved each other. Police and CRPF personnel intervened swiftly to defuse the tension.

The high-voltage fight between Sumalatha and Nikhil has been termed as a battle between Mandya’s pride versus loyalty to the Vokkaliga-controlled JD(S). According to local BJP cadres, the presence of Yash and Darshan added colour to Sumalatha’s campaign and the crowd had translated into votes.