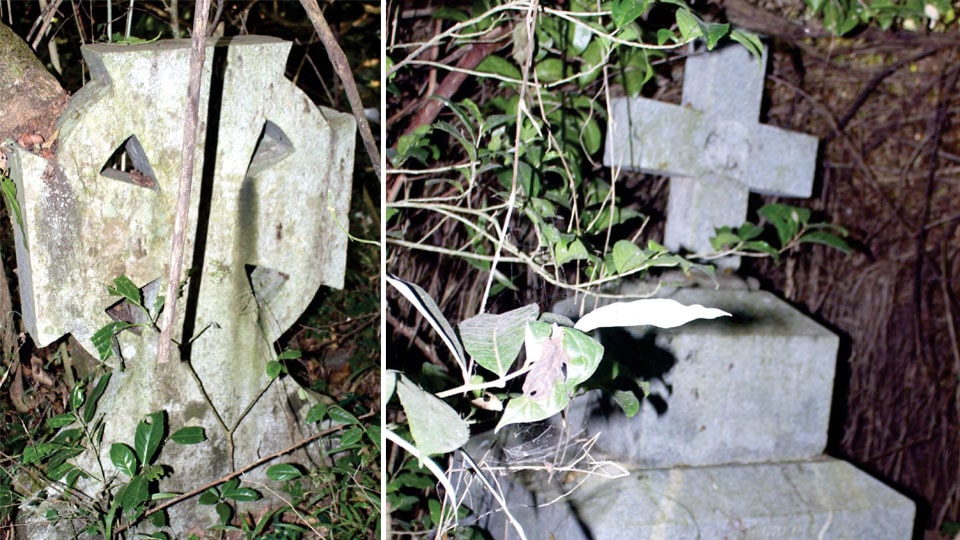 In Neglect the Warriors Rest

Madikeri: Centuries ago, the battlefields of Coorg (Kodagu) thundered with their war cry as they took on marauding armies of the invaders. The British had their own army in Kodagu with thousands of soldiers and officers assisting the Empire to rule the tiny district and also safeguard its borders from marauders.

But the days of the dynasty and the royals are long gone but their remnants — in the form of tombs — are still found in many parts of the district. And unfortunately, these tombs are neglected with no maintenance and weed growth around them.

At Mahadevpet in Madikeri town there is a Gaddige  — royal graveyard — built in the Indo-Saracenic style. On the rectangular base, there is a large dome and four turrets. Two Kings of Kodagu (Doddaveera Rajendra and Lingarajendra)  and their queens have been buried in the two larger identical structures. The third smaller one has the remains of the Chief Preceptor (Rudrappa) of the Kings.

Beside these three tombs, at a little distance away but within the same enclosure are the tombs of father and son Biddanda Bopanna and Biddanda Somayya. They had served Kodagu and its Kings as Army Generals. While these structures have been maintained (though not very well) by the Kodagu District Archaeology Department, a couple of tombs of British Officers are lying in a pathetic state behind Industrial Training Institute near Field Marshal K.M. Cariappa College.

Unfortunately, some of the white marble slabs of the tombs have been taken away by people and have been used as steps outside their houses after putting cement on the inscriptions and retaining only the outer white marble frame after polishing them.

Among the tombs, one tomb belongs to a son of a Lieutenant General who died when he was just 18 years old. Another tomb has the names of four members of one family. However, the cause of death is not known — if they died separately or together. But the name of the person who built the tomb has been carved and it says he is from Bengaluru. This shows that special interest was taken to build this tomb and a person was specially summoned from Bengaluru for the purpose.

Cause of death lost forever

These tombs were carved after 1805  AD and sport different years on them. Except names, there are no other details available on the tombs and as such, the reasons behind their deaths have been lost forever.

Records say that these tombs were earlier located at the place where the present Raja’s Seat stands. These tombs were discovered in the pre-independence era and at that time, Raja’s Seat was on the outskirts of Madikeri town and this may be the reason for the tombs to be built in the vicinity of Raja’s Seat.

After independence when plans were chalked out for Madikeri’s development including the beautification of Raja’s Seat which was at an elevated place, the tombs were shifted behind Industrial Training Institute. Then, Raja’s Seat came within the jurisdiction of Madikeri town and it was developed into a tourist place.

After the tombs were shifted behind Industrial Training Institute, a protective compound wall was built around them. Over the year, the wall has collapsed and treasure seekers have dug up many graves. Wild weeds and green growth have covered the area and they have grown up to almost 20 feet.

There are no records whatsoever regarding the dead officers. Whether they died naturally or whether they were killed by local kings and chieftains is not known and this may be a good subject of research.