Home » Feature Articles » India, Pak closest neighbours, there can be so much give ‘n’ take, Says A.S. Dulat, former Chief of Research and Analysis Wing 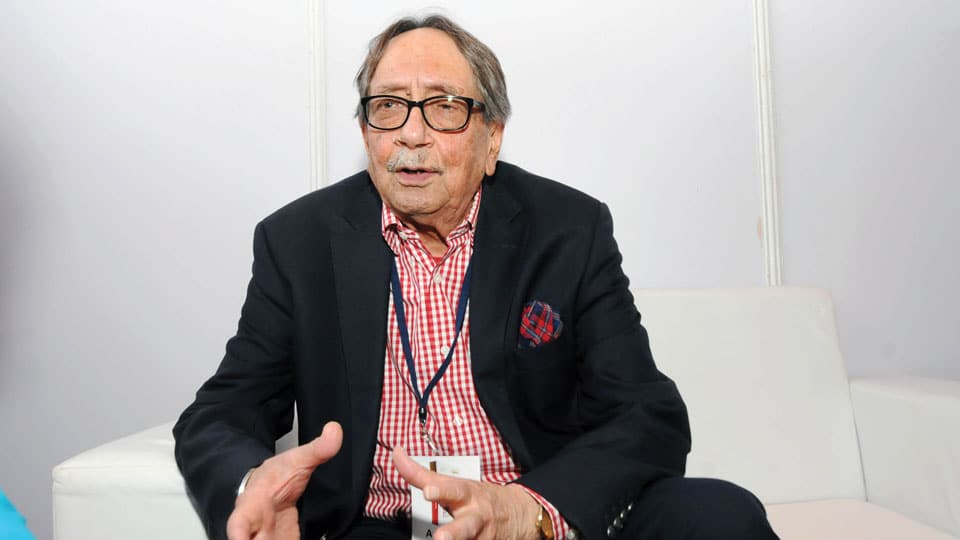 India, Pak closest neighbours, there can be so much give ‘n’ take, Says A.S. Dulat, former Chief of Research and Analysis Wing

Spy thrillers are always great to read and watch as they are fictional. However, real life world of spies is different and it is said, very lonely. Former chief of Research and Analysis Wing (R&AW) Amarjit Singh Dulat (A.S. Dulat), was in Mysuru recently to participate in the Second Mysuru Literature Festival where his two books ‘Kashmir: The Vajpayee Years’ and ‘The Spy Chronicles’ were discussed during the session ‘Where the mind is without fear.’

Star of Mysore Features Editor N. Niranjan Nikam caught up with 78-year-old Dulat, and in a frank, open tête-à-tête, he spoke about his stint in Intelligence Bureau, as R&AW Chief, his role in Kashmir and the reasons for writing books when most other bureaucrats prefer not to tread this path. Excerpts.—Editor

Star of Mysore (SOM): Tell us what Intelligence Bureau is all about as you were Special Director of IB.

A.S. Dulat: Intelligence Bureau is an old organisation. It was started by William Bentinck and William Henry Sleeman in 1835 called the ‘Thuggee and Dacoity Department.’ Sleeman was later promoted as its commissioner in 1839 and this later became the Intelligence Bureau. It is about 130 years old now. It is a great organisation, very professional and it is India’s premier intelligence agency.

SOM: The R&AW of which you were the Chief has completed 50 years. This is the Foreign Intelligence of India. Is it like FBI, KGB, Mossad or MI?

Dulat: I was an accidental chief. Yes, it is like the other foreign intelligence agencies. The KGB doesn’t exist as now it is Russian Intelligence Agency. R&AW is like MI 6, Mossad and FBI which deal with intelligence from the borders and abroad.

SOM: Though your job looks like you have been donning the role of James Bond, is it as glamorous as it sounds?

Dulat: Not at all. In fact, the life of all intelligence officers particularly in the field can be quite lonely because you are not supposed to say what you are supposed to say. I still remember the day when I joined the IB what the chief said: Look, never brag about where you are working. But if anybody asks you where you work, there is no need to lie. But at the same time don’t volunteer anything. That is the crux of intelligence. And the next chief said something even more remarkable: ‘Cat has nine lives. In the IB remember you have only one life.’ It is because we can’t afford to make mistakes.

SOM: Most of the people in intelligence or bureaucracy prefer not to write about their years in service. You are one of the few exceptions. What prompted you to write Kashmir: The Vajpayee Years?

Dulat: I have been dealing with Kashmir for a long time. It is all stuck inside my head. You know I left Government in 2004 when the Government changed. A lot of publishers asked me to write about my stint in the intelligence wing. I told them I can’t talk about it. It is only ten years later in 2013 or so when I thought maybe now enough time has passed and I could now get this whole thing out of my head. There was this friend in journalism Aditya Sinha who helped me put the book together.

SOM: Going back to James Bond, you have written ‘The Spy Chronicles: RAW, ISI and the Illusion of Peace’ that too with Pakistani spy Asad Durrani. How did it happen?

Dulat: Did I tell you that life of an intelligence officer in India as anywhere in the world is lonely. If you want to connect it to fiction, it is much closer to John Le Carre, the spy thriller writer than it is to Ian Fleming, creator of James Bond. If you remember Le Carre is also fiction.

SOM: But you wrote this book with Lieutenant General (Retd) Mohammad Asad Durrani of Pakistan’s ISI (Inter- Services Intelligence). How did this happen?

Dulat: Actually General Durrani and I met a number of times during India-Pakistan track 2 meetings. So we used to talk about a lot of things and a certain sort of chemistry developed. We understood each other. A mutual respect also developed. And seeing our friendship some people prompted us, since you feel so comfortable in each other’s company, why don’t you write a book? So the first time it was suggested, I remember, it was a meeting in Istanbul. I looked at him and the General laughed.

SOM: Who addressed this question?

Dulat: Whoever, somebody there. The General also laughed and said to me, even if we write fiction nobody will believe us. Subsequently, somebody prodded us to write. So we wrote two articles. One was published simultaneously in India and Pakistan — in the Dawn there and The Hindu here, it was on ‘Intelligence Cooperation.’

The second paper never got published. It still exists on the University of Ottawa website, it was on Kashmir.

And then this book on the Vajpayee Years came out and I asked the General how it was received in Pakistan. He said actually it was received quite well. So I think he liked the book, something, somewhere must have impressed him. Then I think he thought about the whole thing again and said if we can let us do a book together.

SOM: What has happened to General Durrani now? Has he been jailed for violating Pakistani Military code of conduct by writing the book?

Dulat: No, no question of jailing or anything. Unfortunately, neither of us expected the adverse reaction in both countries. There they said, how dare you write a book with R&AW and here similarly people said, how can you write a book with the ISI with whom we are not even talking. They have been very unfair to Durrani. He is on ECM-Exit Control List now, which means he cannot leave the country.

SOM: You are still in touch with him?

Dulat: All I can say is, ‘He is in good spirits.’ He is quite confident he will get out of this very soon.

SOM: Both the books you have written have drawn lot of media criticism. How do you feel about it?

The second book, yes, people have said, why should the former R&AW chief be so friendly with an ISI guy? The book is written in good faith without any malafide intent. It was written with a positive outlook with the hope that somebody, somewhere realise the need for India and Pakistan to come closer and that too talk peace.

If you read the book, you will find there is a lot of positivity in it, very little which is negative. Many people on our side refer to the General and say that he is a hawk. But when you read the book you will find that he has conceded a lot. He has compromised a lot. There is nothing hawkish about what Gen. Durrani has said. He has conceded things.

SOM: What has he conceded?

Dulat: On Kashmir. He says Pak made mistakes in Kashmir and he has given some specific instances about the mistakes they made and at the end of it he says let us forget about Azadi. Let us hope Kashmir gets peace and becomes a bridge between India and Pakistan. What more can a Pakistani say? And when he says Azadi, he is almost conceding it.

SOM: Does it mean there is a lot of give and take among the spies still keeping their national interest intact?

SOM: Do all the agencies — CBI, IB and R&AW work together or at cross purposes?

Dulat: Definitely we work together. But you know, inevitably and this is a worldwide phenomenon — there are jealousies, there are rivalries but the interesting thing here is whenever there is a problem, a crisis, everybody gets together.

I have dealt a lot in Kashmir where for instance everyone was always working together. There were about seven to eight agencies. I am not talking about CBI there. The IB, R&AW, J&K Police, the Paramilitary, Military, everybody worked together.

SOM: But what is the situation now?

Dulat: Not very good, not very good. You know a former MI 5 Chief, if I remember her name correctly Eliza Manningham Buller who said surprisingly after 9/11 and this was the message she conveyed to the Americans that they needed to talk to the Al Qaida and the message was, “The only way to deal with terrorism is through politics.” Understand that and that is what we are not doing. And Kashmir is nothing if not a political issue. It is a political and emotive issue. We must understand that and we must never stop talking to the Kashmiris.

SOM: Are you going to be coming out with any more disclosures?

Dulat: (Laughs) I was asked this question in 2015 when the Vajpayee book came out. One of the first places I went to was Punjab University where I was educated and spent a lot of time there. There was a book launch. It was presided over by the present Chief Minister Capt. Amarinder Singh. A lady journalist asked me what your next book is on. I said a spy thriller! So, instead of writing a spy thriller, I wrote a book with another spy master. So who knows there may still be a spy thriller?