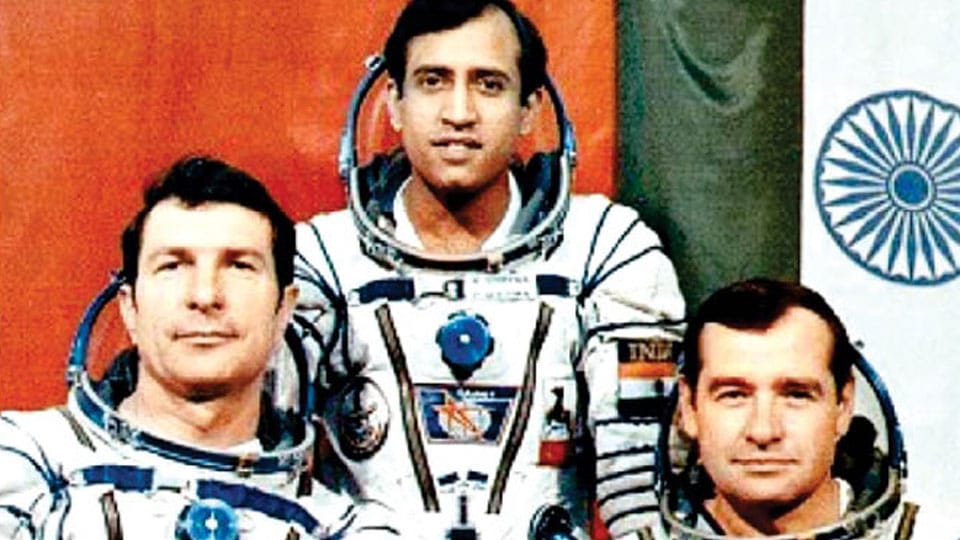 The romance of space is always beguiling. Exploring the “Final Frontier” in science-fiction, television or films, foreshadowed the “Space Tourism” some millionaires experienced recently. The launch by the Indian Space Research Organisation (ISRO) of 104 Nano Satellites in one operation drew admiration; but the failure of the Polar Satellite Launch Vehicle, after these successes was discouraging. Such events are news, but impersonal. I recall a visit to a space training centre in Moscow in 1983 when my husband was in the Indian Embassy. That memory has an emotive overlay to this day.

In 1982, ISRO’s Space Programme and “Intercosmos” of the former Soviet Union decided on a joint space operation. Two Test Pilots of the Indian Air Force, Rakesh Sharma and Ravish Malhotra were chosen for this venture and sent with their families to Brezhnev Star City in the Moscow region to prepare for the event.

In 1983 we were invited to visit our “Cosmonauts”, in Russian parlance, who were in training. It was a rare opportunity for us to visit Star City which, being a military installation, was heavily guarded and access curtailed. It was named “Zvyozdny Gorodok” and is the site of the Yuri Gagarin Cosmonaut Training Centre, operating from 1960 onwards. It has schools, medical and other facilities for the spacemen and their families.

After driving through wooded countryside and clearing several check points, we were admitted inside to meet Cosmonauts Ravish Malhotra, Rakesh Sharma and his wife Madhu Sharma. Ravish Malhotra was a dashing and handsome young man in a red and white chequered shirt and white pants. He was six years older than his colleague Rakesh. Both were from Punjab. They were full of enthusiasm, grueling though the training was. 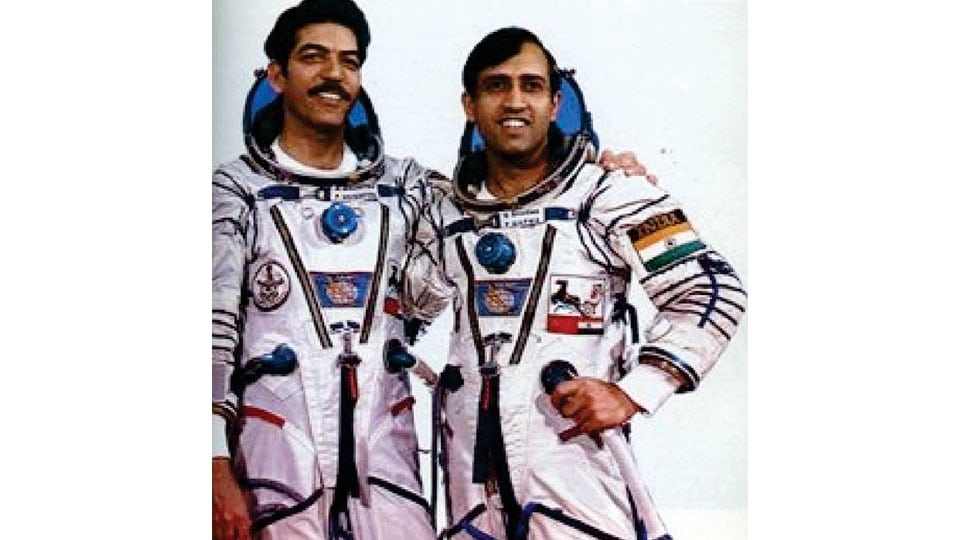 They had to learn Russian intensively as it was the only language in use for training and commands. Yoga, as an antidote to space sickness, was compulsory. We saw Rakesh’s little daughter Manasi, a bright-eyed, lively child who was to undergo surgery for a cleft palate and lip. After lunch and a tour of the station, we returned to Moscow with excited anticipation of the space adventure to come.

But our next visit to Star City was on a tragic note. Rakesh Sharma’s daughter had died while undergoing routine surgery. Gloom enveloped Star City, the grief-stricken parents trying to come to terms with their loss.

In keeping with the tradition of the armed forces, both pilots continued their training. Finally Rakesh Sharma was chosen to go into space with Commander Yury Malyshev and Gennadi Strekalov. Ravish Malhotra selflessly supported the programme starring his colleague. He was given a Kirti Chakra later, but missed the other honours that came to Rakesh, who was awarded the Ashoka Chakra and the title “Hero of the Soviet Union.” 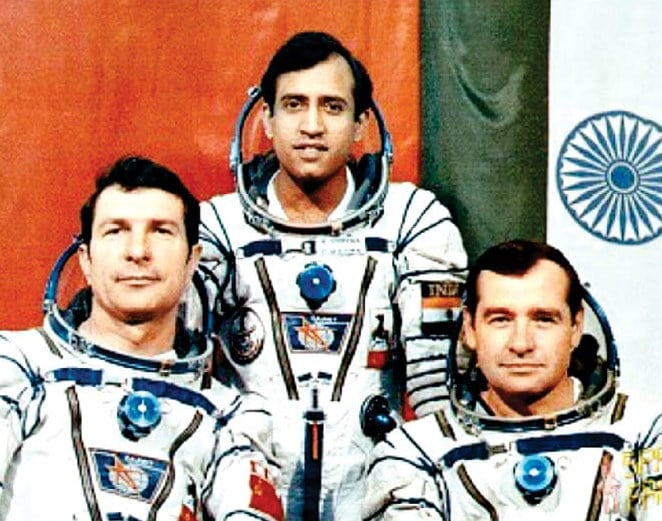 On April 2nd 1984, the rocket Soyuz T-11 was launched from the Baikonur Cosmodromein southern Kazakhstan. The rocket docked at Salyut 7 Orbital Station. The three cosmonauts transferred to the station. They spent 7 days, 21 hours and 40 minutes in it, orbiting the earth.

Quoting Iqbal, Rakesh Sharma told Prime Minister Indira Gandhi on a live-link that India, seen from space, was “Saare Jahan Se Accha!” To friends he said he also saw heightened colours and a shade of vibrant blue which reminded him of the Himalayan mountainscapes by the Russian artist, Nicholas Roerich, much revered in Russia. His son, Svetoslav Roerich, also a brilliant painter, lived near Bengaluru with his actor wife Devika Rani, a great grand-niece of Rabindranath Tagore. 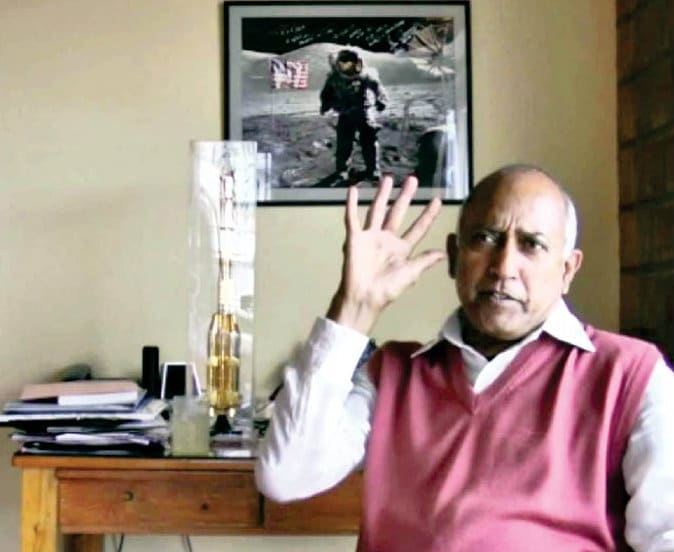 Rakesh Sharma now in his study with a picture of an American Astronaut on the moon in the background.

Both Indian cosmonauts are elderly now, Sharma being 68 and Malhotra 74. Ravish Malhotra, an Air Commodore, commanded a squadron and also the Hindon Air base before he retired in 1994. He was Chief Operating Officer of Aerospace Dynamatic Technologies Ltd., in Bengaluru. Rakesh Sharma lives in retirement in Coonoor. His wife Madhu is an interior decorator, son Kapil Sharma is a Film Director who produced the film   “I, Me Aur Main.” Kritika, a later addition to the family, is listed as a media artist.

Their achievements may now be unknown to young Indians. Rakesh Sharma did not go to the moon but had the luck to be the first Indian in space. We salute Air commodore Ravish Malhotra and Squadron Leader Rakesh Sharma for bringing glory to India.