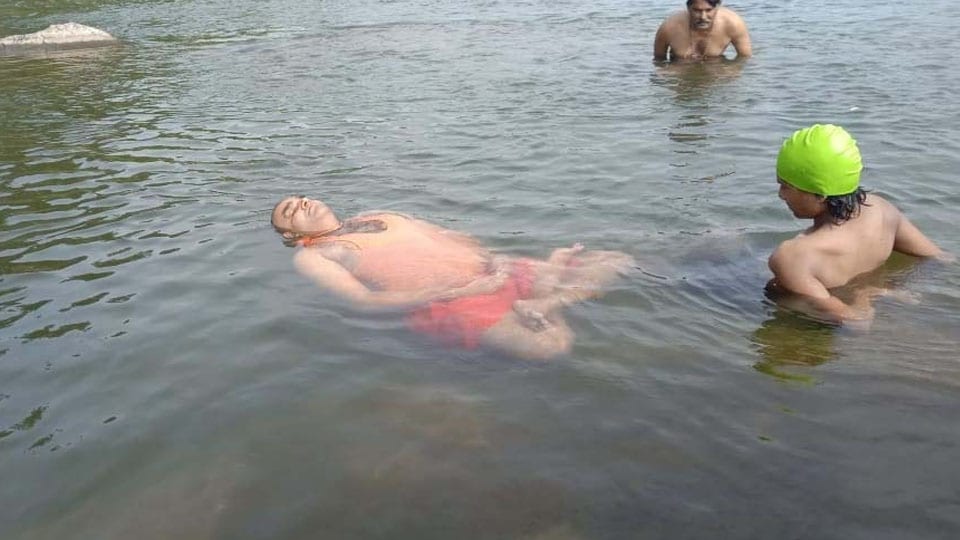 He performed various asanas in River Cauvery near the Ashram for nearly 30 minutes. Over 10 asanas including Virabhadrasana, Shiluve Asana, Hanumanasana, Padmasana, Matsyasana and Kurmasana were displayed with ease as he floated on water.

Speaking on the occasion, he said “Practicing yoga will reduce physical and mental stress. We must make time for yoga and pranayama every day. This will increase immunity and concentration.” Associations and organisations should create awareness about yoga benefits, he suggested.

Earlier, at the programme held at the Ashrama premises was attended by Mandya District Minister K.C. Narayanagowda, his wife Devika, daughter and son-in-law. The Minister too performed yoga for about 20 minutes. Sri Chandrashekara Shivacharya Swamiji of Hiremutt in Belagavi and former Minister Rudrappa Lamani too joined the yoga session.

Speaking on the occasion, Dr. Bhanuprakash Sharma said that doing yoga everyday will help us lead a healthy life. Stating that PM Narendra Modi has created awareness about the benefits of yoga to the whole world, he said that everyone should practice yoga for personal as well as society’s health.