Mysuru: Jawa and Yezdi bikes, which had ruled the roads way back in the 70s and the 80s, vroomed on the main thoroughfares in city to mark International Jawa Day this morning.

International Jawa Day is celebrated on the second Sunday of July every year to mark the start of production of these motorbikes in the 1960s. Not only vehicles manufactured at the facility in Mysuru till 1996, even motorcycles imported from Czechoslovakia are paraded at the rally every year.

The rally in city began at about 11 am after Yaduveer Krishnadatta Chamaraja Wadiyar took a look at these Made-in-Mysore bikes at the Golf Club on Maharana Pratap Road.

Speaking on the occasion, Yaduveer said that the Ideal Jawa Factory, started by late F.K. Irani which once stood in Yadavagiri was inaugurated by his grandfather the then Governor of Mysore State, Sri Jayachamaraja Wadiyar, the erstwhile Maharaja of Mysore  in 1961. 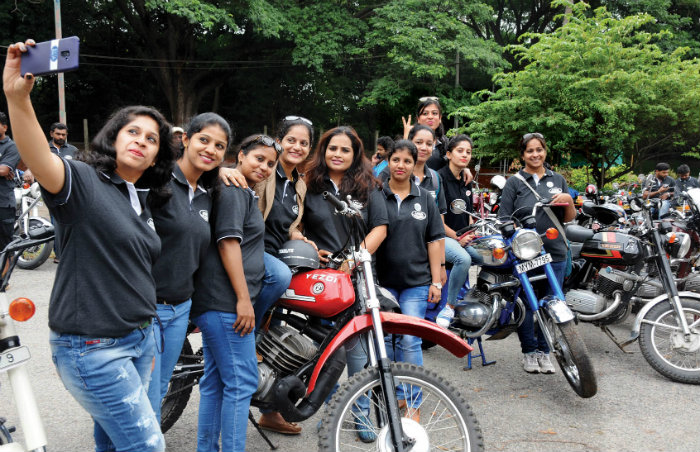 He said that though the factory closed down due to various reasons, one can still see some Jawa and Yezdi bikes still vrooming on city roads and expressed his happiness to see many vintage bikes taking part in the rally.

The bikes which took part in the rally included Jawa Peraks, Jawa Cezetas and Jawa 350, which include right from 60cc to the 350cc Jawa models, Yezdi models such as Roadking 250, Oilking, Classic and Monarch among other models.

The event was also a platform for bike enthusiasts to interact with some of the oldest riders and employees of the then Ideal Jawa Factory. Many women too participated in the rally.

Meanwhile, nearly 100 members of Jawa Friends Club Mysore, led by Sameer and Khizer, took out a rally with their prized vintage bikes to Bandipur Gate from city this morning.

The rally, which began from Nanjumalige Circle, passed through the main thoroughfares of city before leaving towards Bandipur.

Sameer, one among the organisers said, “There are nearly 150 members in the Club and one of the important things of Jawa is that most of these vintage bikes have been passed on over generations. There are people who are riding bikes used by their father and grandfather.”

It’s raining good news for bikers. Anand Mahindra of   Mahindra & Mahindra has confirmed on Twitter that “Jawa Motorcycles will be launched in India in 2018.”

Mahindra is expected to launch the new Jawa branded motorcycle in India by  this Deepavali. This bike is currently under development and production is set to commence from the Mahindra plant in Pithampur, Madhya Pradesh. Mahindra owns rights to sell Jawa brand of motorcycles both in India and South East Asian countries and local production will make these bikes more affordable. Mahindra may scale down to 250cc or scale up to 350cc so as to retain the Jawa’s iconic heritage.