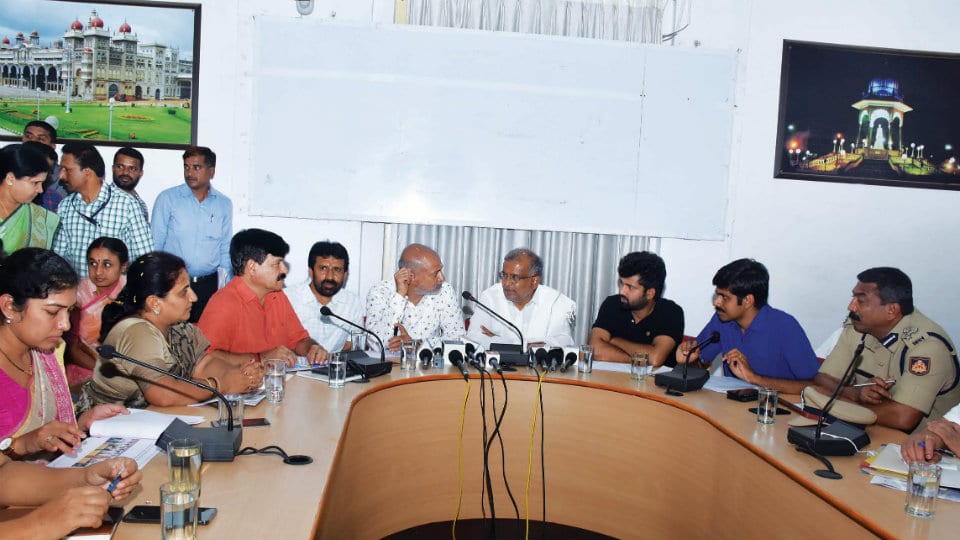 Mysuru: The June 21 International Day of Yoga in Mysuru, India’s major yoga destination, will be a mega event with efforts on to mobilise over one lakh yoga enthusiasts on the sprawling Mysore Race Club (MRC) premises at the foot  of Chamundi Hill. However, the idea to enter the Guinness World Record once again has been dropped due to shortage of time.

The District Administration has decided to hold the fifth edition of International Yoga Day in association with Yoga Federation of Mysore (YFI) in a grand manner at MRC premises and has made preparations for a mega gathering of yoga aspirants.

The organisers had earlier planned to go for a world record, mobilising over 1.25 lakh people at a single venue like they did in 2017 which resulted in Mysuru entering the Guinness Book for the largest yoga demonstration or lesson at a single venue. As many as 55,506 people performed yoga to attain the record.

Last year, Mysuru did not vie for any record though more than 60,000 people performed yoga at the MRC venue. Lack of preparations was cited as the reason for not going for the record. The Assembly election poll code had come in the way for the preparations last year and this year it was Lok Sabha elections. Last year, a Guinness World Record was achieved at Kota in Rajasthan when about 1.05 lakh people performed exercises to mark International Yoga Day.

Elaborating the preparations made for the mega event, Deputy Commissioner Abhiram G. Sankar told the meeting that the District Administration had already been making all preparations to make this event a great success by conducting yoga rehearsals in different places with the support of YFI and the election model code of conduct did not hinder this.

“We have invited all yoga associations, educational institutions, industries and corporate houses to bring yoga enthusiasts for the mega event. As many as 194 blocks will be created at MRC premises so that the participants can take part in the event separately,” he said.

“Earlier, CFTRI, BEML and other Central Government organisations were conducting this event in their office premises, but this year, they too are joining us. Separate blocks will be created for them for their easy performance,” he added.

The DC also said Instructions have been given to KSRTC to operate buses from as early as 4 am on June 21 from all the layouts to drop them at MRC. “Last year, KSRTC had operated 135 buses. We have asked them to deploy more buses this year,” he added.

JSS Mahavidyapeetha, Ganapathy Sachchidananda Ashrama and ISKCON have come forward to supply breakfast for all the participants. An official committee led by Joint Director of Food and Civil Supplies Department M. Shivanna will oversee food preparations. Directions have also been given to all educational institutions heads to send their students wearing white dress.

He added that various committees have been formed and all the basic requirements, precautionary measures including ambulance facilities, fire safety measures have been planned.

Funds for the event

Later speaking to newsmen, G.T. Devegowda said, “Mysuru has contributed immensely towards Yoga and as part of the International Yoga Day, authorities have made elaborate arrangements for smooth conduct of the event.” “We are trying to bring Union Ministers for the event, various institutions and organisations have been requested to create world record but the preparations are not adequate for that. Next time, we will give proper training and attempt for Guinness Record. Rehearsal for the event will be held on June 9 and 16,” he added.