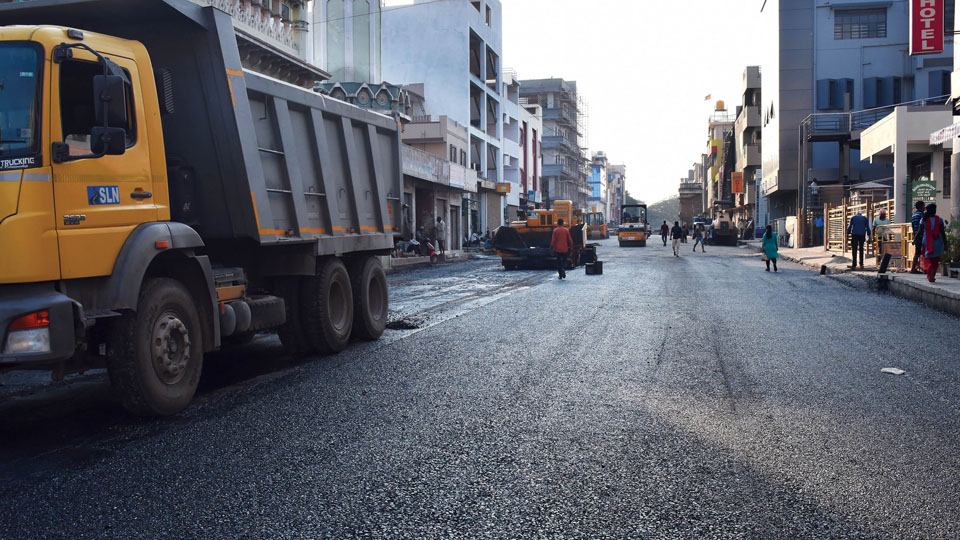 Mysore/Mysuru: While only three properties extending up to 60 metres have to be demolished to realise the full benefits of a widened and a beautified Irwin Road, asphalting works have been undertaken under the initiative of Chamaraja MLA L. Nagendra. The work that was on since the last three days has been completed today.

Following complaints from residents and commuters that travelling on Irwin Road — that saw demolition of over 81 properties of the total 84 — was a nightmarish experience following many potholes, uneven gradients and also the road breaks, the asphalting works have been completed from Ayurveda College Circle till Nehru Circle (Lashkar Police Station).

This morning, Nagendra visited Irwin Road and examined the asphalting works and expressed happiness that the stretch has been made free of potholes and road breaks.

Only three properties on the road have to be demolished and the Mysuru City Corporation (MCC) has kept the razing works pending as the property owners have approached the High Court. Though the MCC has repeatedly said that they are ready to widen the bottlenecks after paying compensation, cases have landed in the Court, restraining the MCC.

The widening works of Irwin Road in the heart of the city was launched in 2018. Though over 80 percent of the demolition and widening of the road has been completed between the Arch Gate till the City Railway Station, the 450-metre stretch from Government Ayurveda College Circle till Nehru Circle is the bone of contention.

“We will have to await the Court order and we have taken up the asphalting works as many commuters had complained,” Nagendra said.