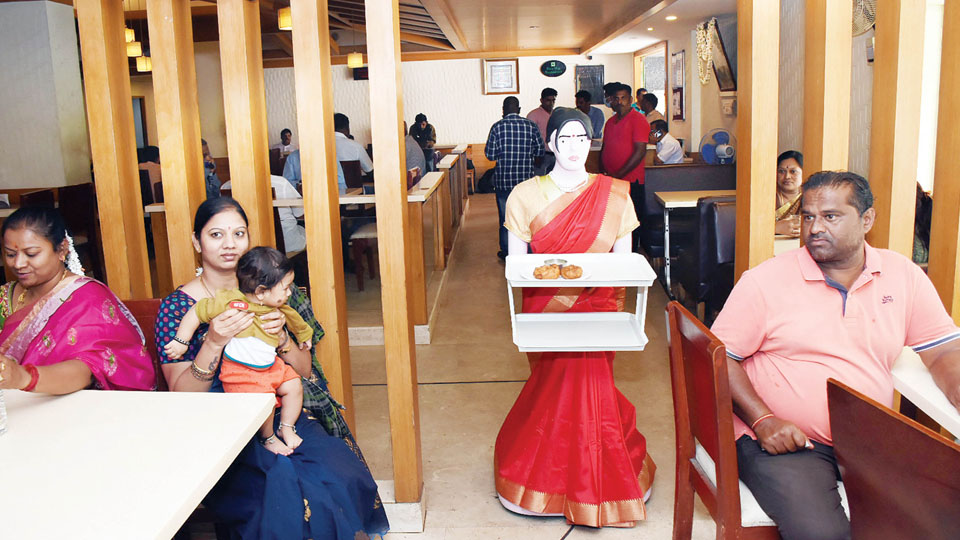 Mysore/Mysuru: Robots have been replacing humans on factory floors and even operation theatres for decades, and now they are coming for customer-facing jobs.

They are designed to look and act like us and these robots can do any job humans can do, perhaps much more effectively and efficiently and without falling ill, needing breaks or offs.

Though robots have been functioning as waiters at many restaurants in Chennai, Hyderabad and Shivamogga in Karnataka, it is for the first time Mysuru has such a facility.

While a trial run was conducted yesterday at the hotel, Echo has begun serving customers from today and has proved a big crowd-puller.

Purchased from a robotic firm in New Delhi at a cost of about Rs. 2.5 lakh, Echo arrived at the hotel yesterday and the robotic engineer, who accompanied Echo, is programming it to take orders through voice commands.

Echo is battery-operated and once charged for four to five hours, it can move around the hotel taking orders through voice commands and serving food for eight hours.

A magnetic strip has been laid in the restaurant between the tables and also from the kitchen to the tables for the robot to move.

Echo can carry food items weighing up to 10 kg. Each table is given a number and has been affixed with a sensor.

Once the food is prepared, hotel staff places the food on the tray that Echo holds and issues commands to serve the food to a particular table and Echo effortlessly reaches the table with food. The customers will have to pick up their plates once Echo reaches their table.

Apart from listing the items on the menu, Echo is able to provide information on tourist spots in and around Mysuru along with the distance and the estimated time taken to reach. At present Echo is programmed to serve food for 15 tables which can be upgraded to more tables.

Echo has been designed in such a way so that it does not fall while moving around. Sensors have been installed in the robot so that it stops whenever someone comes in its way or crosses while carrying food. The hotel staff has been well-trained to operate Echo. The staff will stay in touch with the makers of the robots so that they can guide them in case of an emergency.

P.V. Giri, Chairman, Siddharta Groups, told Star of Mysore, “There are plans to get five more robots but it depends on the performance of Echo and on how customers accept its services.”

“There are many educated people who choose the profession of waiters and they eventually quit when they get jobs according to their qualifications and we used to face staff shortage. This is one of the reasons why we got Echo. Moreover, we were once using grinding stones which have been replaced by electric grinders and mixers. Machines have taken over many works and we have to adapt,” Giri added. According to hospitality industry experts, restaurants are no longer just about food. The ambience and experience matter a lot and such trends easily attract customers for gaining unique experiences.

2 COMMENTS ON THIS POST To “A trend-setter in city’s hospitality sector: Saree-clad robot brings food to table”