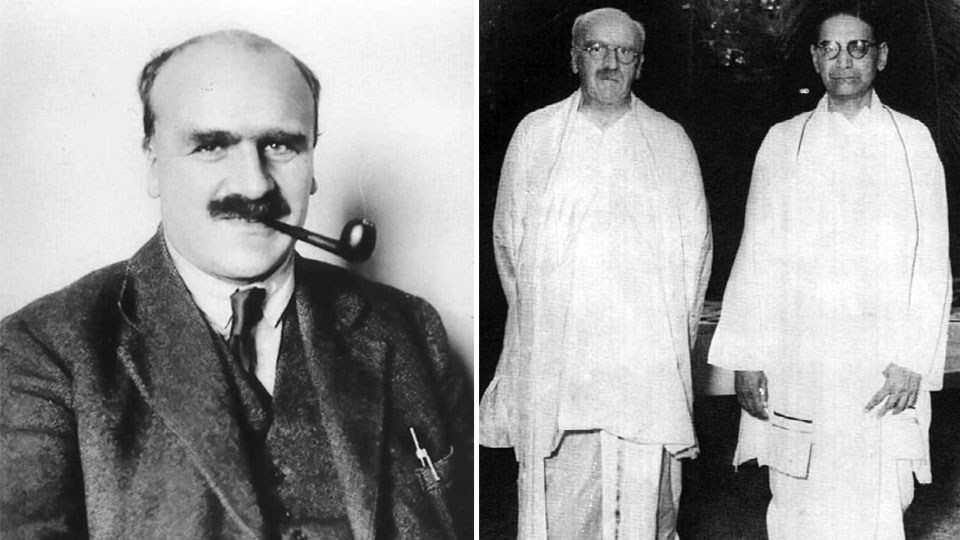 Last weekend, I wrote about how I received a wrong book in response to my order from an online bookseller and how, instead of being a complete disappointment, it turned out to be an event with an unexpectedly interesting ending.

As I have already said, the wrong book that I received was a biography of the famous scientist J.B.S. Haldane, entitled ‘A Dominant Character’ by Samanth Srinivasan, a London based writer of Indian origin. Yes, I think mentioning his Indian origin is very necessary here today because we Indians are by now much used to revel in the sense of satisfaction and even accomplishment that the term connotes and brings us and conveys to others!

The book is not just highly informative but very readable and enjoyable too, with never a dull page or passage. And, the author who, as I have already credited as being a very capable and captivating writer, perhaps could not have chosen a better and more apt title for his book, considering the fact that after you read it, you simply cannot disagree that its protagonist would deserve any other phrase to describe his unique personality. But, at least to me, Haldane comes across as an extremely intelligent genius, who was naturally not bereft of the extreme eccentricity that is said to always accompany extreme intellect!

The man was a political party worker, fighting soldier, mathematician, statistician, chemist, physicist and biologist, all rolled into one. As a man wearing many hats in the field of biology, he dabbled in physiology, genetics, medicine and evolutionary studies and most surprisingly he excelled in everything he did and thus made a mark in the world of science, although the only degree he held was in mathematics alone.

Yes, with absolutely no academic qualifications in any of the biological sciences, he not only launched himself into biological research but also held very high and enviable academic positions. Thankfully, he was from a time and a place where the only attribute that mattered for a man to make a mark, was whether what he was talking, made sense or not!

There have been many such others, in the field of science, arts, philosophy and politics, who found their deserved and desired niches, without any matching academic qualifications and who yet managed to leave their marks on history, indelibly. Haldane had some very strong political views too because of which he had a very turbulent life, which finally resulted in him relinquishing his British citizenship and deciding to settle down in India.

So, in the year 1957 when he was sixty-five-years-old, he boarded an Air India flight and flew down from London to Calcutta, where he took up a professional assignment at the Indian Statistical Institute (ISI). The precipitating factor that nudged him to do this was his sense of outrage and utter disgust when the United Kingdom, France and Israel attacked Egypt in a joint bid to take control of the strategic Suez Canal, which he saw as a very wrong act. In an interview with The Times, just before departing from Britain, he said “I do not want to be a citizen here any longer, because Britain is a criminal State.” And, in his official resignation letter, submitted to his University, he wrote, “I no longer want to be a subject of a State which has been found guilty of aggression by the overwhelming verdict of the human race. I believe that I shall find in India, opportunities for research and teaching in a country whose government, by its active work for peace, gives an example to the world.” Very touching words indeed, for any Indian like me!

India had attracted him when he attended the Indian Science Congress in Calcutta in the year 1954 and toured the country, delivering thirty-five lectures in a span of just seven weeks. During this trip he became a close friend of P. C. Mahalanobis, the Director of the ISI, at whose house he had stayed too and upon whose invitation he agreed to join the institute as a scientist.

But restless and unaccommodating that he was, his honeymoon with the ISI too was very short lived, just like his first marriage to Charlotte Franken and he walked away from there, disappointed with his working relationship with his friend, the Director! He shifted base to Bhubaneshwar in Orissa on the invitation of Biju Patnaik, the Chief Minister there, who recognising his worth, offered to establish for him an institute of genetics and biochemistry.

However, his remaining life was too short for him to do anything worthwhile and during a visit to the US for a scientific seminar, he fell sick with profuse rectal bleeding. On his way back to India he stopped over at London where the reason for his problem was diagnosed as rectal cancer for which he underwent surgery there. But his cancer eluded a complete cure and he went into many complications to which he succumbed on 1st, December, 1964.

Even close to his death, his wry sense of humour did not leave him. When his second wife Helen Spurway, in the presence of a few of his students, handed him the letter written by his doctor from Calcutta, informing him about the incurability of his disease, he told her that she should have taken his pulse before and after he read it, to check how unperturbed he was! He said that while he was not afraid of exiting from this world, he was only scared of exiting from it with unkept promises. He had these words from the Bhagavadgita for his students who were standing around him:

Soon after the diagnosis of his ailment was made too, he wrote a poem about cancer which I shall reproduce here later. Haldane had willed that his body, after his death, should be used for scientific study and it was therefore shifted to the Rangaraya Medical College at Kakinada in the neighbouring State of Andhra Pradesh, for dissection and preservation of the organs. After that was done, the tiny bones from his ears were sent to the University of Chicago, while the rest of his skeleton was bleached and strung up for display in the anatomy museum, where it still stands to this day.

Till I myself entered medical college, as a first-year medical student, in the year 1975, I knew nothing about this unusual man of science. It is from this moment of the death of this colossus of science that a very important link got established between the man who dissected the body of Haldane to study and preserve it and who, a full decade later, walked into our classroom as our first teacher, for the very first class of our medical career.

This colossus was Dr. Vissa Ramachandra Rao, who soon after his retirement from service at the Rangaraya Medical College, joined the M. R. Medical College, Gulbarga, as the Professor and Head of the Department of Anatomy. Very quickly into my first year, he somehow developed a strong liking for me and the very important reason for this was perhaps the great interest we both had in photography, reading and the history of medicine.

Apart from teaching us Anatomy, he used to hold slide shows at his house and tell us all about his travels across the world and his long stint in Britain. It was during one of these sessions that he told us about how he had dissected and preserved the body of J.B.S. Haldane, the scientist. While he had shown us slides of his work and Haldane’s strung-up skeleton, I could never find a single picture of it even on the internet and sadly in the short time that I had, to write this series of articles, I could not contact anyone at the Rangaraya Medical College, who could have helped me by sending me some pictures that I could have used here. Hopefully, I’ll be able to visit the place some time and do it myself.

To go back a little and brush up the memory of my regular readers, I would like to mention here that way back in the year 2012, after I had gone to see my guru, Dr. V. R. R. Rao, in Salem, where he was living in retirement, as a nonagenarian, I had written about his role in preserving the mortal remains of Haldane, the scientist of international repute. For those who do not know what I am talking about, there’s always time and occasion for it next week!

Dr. K. Javeed Nayeem J.B.S. Haldane Over a cup of evening tea
Sound system at cinema theatres and cleanliness
Why is Emotional Healing a necessity in one’s life?

6 COMMENTS ON THIS POST To “J.B.S. Haldane: Distinguished yet Disillusioned!”