Home » Columns » End of the tale of two Stalwarts! 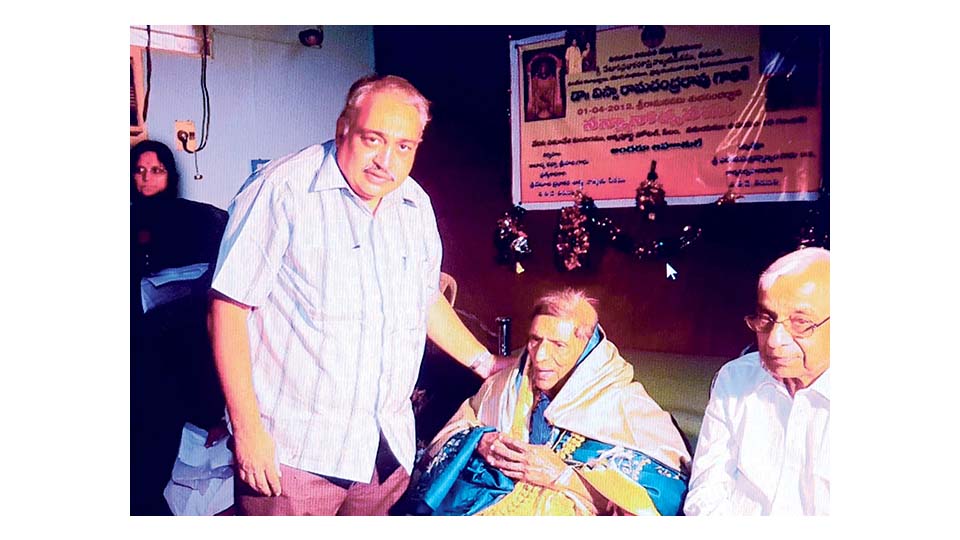 End of the tale of two Stalwarts!

In my last two articles I wrote about J.B.S. Haldane, the more than life-sized and more than queer man of science, who left Britain, the country of his birth, as a disillusioned man, to settle down in India, where he lived till his death on 1st December, 1964. I also wrote about how one of my teachers in Medical College, Dr. Vissa Ramachandra Rao, who as a Professor of Anatomy at the Rangaraya Medical College in Kakinada undertook the dissection and preservation of the body of Haldane, in accordance with the last wish of the man.

It is said that while this dissection was going on rather secretly, Haldane’s wife, Helen had to keep the huge crowd of his emotional fans and admirers engaged and distracted with an emotional speech, outside the Medical College, to prevent them from rushing in and stopping the dissection! Haldane made lasting contributions in human physiology by developing a simple treatment for tetanus (lockjaw) by laying the groundwork for high-pressure oxygen therapy. In genetics, he was the first to discover linkage in mammals to map the human chromosomes and to measure the mutation rate of human genes.

As I said earlier, with a degree only in Mathematics, he had no formal qualification in Science, which he learnt only by apprenticeship. As a self-made Scientist-Professor Haldane believed in finding out things for himself. To study fatigue he even shut himself for long periods in a tight chamber, getting the air charged with carbon dioxide. Early in his career he almost poisoned himself by swallowing bicarbonate of soda and hydrochloric acid and through his studies found that ammonium chloride could cure convulsions in children.

His career was interrupted by World War I in which he fought as a member of the Black Watch, the 3rd Battalion of The Royal Regiment of Scotland. He was wounded and gassed twice and was mustered out as a captain in 1919. It was after this experience during the war that he became an expert on mustard, chlorine and other gases. After the war, he became a Fellow of New College and from 1922 to 1932 he was a Reader in Biochemistry at Cambridge.

There too he was at the centre of controversy. He was dismissed for “gross immorality” in 1925 after being named an accused in a divorce suit involving Charlotte Franken, his first wife. But supported by G.K. Chesterton, Bertrand Russell, W.L. George and other notables, Haldane won a reversal of his ouster and established the precedent that the private life of a Cambridge Professor was to be considered as having nothing to do with his work at the institution. A noteworthy albeit dubious achievement indeed in orthodox England!

After he became an Indian citizen, he switched to wearing Indian attire and even fasted on occasion in the Gandhian manner and preferred to live quietly with his second wife, the former Helen Spurway, a Science colleague and fellow Lecturer whom he married in 1945. He used to say, “You cannot have a successful marriage unless the wife is better than the husband at some things. For example, I cannot cook or play the piano like my wife but on the other hand she is not as good a Mathematician as I am. Mutual respect is what you need to go through a marriage happily.”

Talking of his lack of musical talent, it’s said that he did develop an interest in Karnatak music but was not able to gain any proficiency in it. But his Indianisation did include something else. Being the impulsive and even sometimes heavy drinker that he already was, he also developed a liking for milk laced heavily with Bhang, the local intoxicant!

When Queen Elizabeth visited India, he was invited to a reception that was held in her honour but he declined the invitation saying that his wife and he did not have decent enough clothes which they could wear for the occasion. But he told his friends that the real reason for this was his hatred for Britain and the fake, fixed, shark-like smiles on the faces of its royalty! His sense of humour was with him till his very end. He even gave his own obituary interview to the BBC, soon after which he wrote a poem about the cancer that was killing him, which I am reproducing here in an abbreviated form:

I wish I had the voice of Homer

To sing of rectal carcinoma,

Which kills a lot more chaps, in fact,

Than were bumped off when Troy was sacked.

I noticed I was passing blood

So, pausing on my homeward way

From Tallahassee to Bombay

I asked a doctor, now my friend,

To peer into my hinder end,

To prove or to disprove the rumour

That I had a malignant tumour.

In order to decide the issue

They scraped out some bits of tissue.

The microscope returned the answer

That I had certainly got cancer,

So, I was wheeled into the theatre

Where holes were made to make me better.

Through this incision, I don’t doubt,

The neoplasm was taken out,

My rectum is a serious loss to me,

But I’ve a very neat colostomy,

And hope, as soon as I am able,

To make it keep a fixed time-table.

So do not wait for aches and pains

To have a surgeon mend your drains;

If he says ‘cancer’ you’re a dunce

Unless you have it out at once,

For if you wait it’s sure to swell,

And may have progeny as well.

My final word, before I’m done,

Is ‘Cancer can be rather fun’.

I know that cancer often kills,

But so do cars and sleeping pills;

It can hurt one till one sweats,

So can bad teeth and unpaid debts.

A spot of laughter, I am sure,

So let us patients do our bit

And help the surgeons make us fit.

Coming back to my Professor, Dr. V.R. Rao, who taught me Anatomy and first told me about his strange association with J.B.S. Haldane after his death, it will be no exaggeration if I say that he too was a very learned man and a gifted teacher, who has left an indelible impression on the minds of the thousands of students he has taught, during his long stint as a teacher.

Fortunately for us, in our Medical College days, my friends and I had many very great teachers, almost in all subjects, who were all able stalwarts in their fields, to whom we owe all our learning and professional abilities. But Dr. VRR, as we all affectionately called him, perhaps by being the first one of them to teach us a difficult subject like Anatomy, for a full eighteen months, soon became our favourite. Beneath his stern exterior he was a very warm and understanding person who was always very sensitive to our problems which he tried to set right with great concern.

He was so impressive that what he said in one hour on our first day in Medical College, is still so deeply etched in my mind that I can reproduce it verbatim even today, although many things which I learnt much later have faded from my memory. His classes used to be both sessions for the learning of Anatomy and also for the inculcation of the essential values required for leading a good life. He was invited by the Royal College when he, along with his Assistant at the Guntur Medical College, Dr. G.R.K. Hari Rao, discovered a new blood vessel in the heart which was later named the Rao & Rao Artery.

When I completed my MBBS and it was time for me to leave Gulbarga, Dr. VRR gave me his trusted German camera and a bundle of manuscripts which were his most important notes, saying: “I think I have no use for these now but I know you will value them.” He could not have been more right. I have preserved them among my most treasured things even to this day. Dr. Rao and I were always in touch over the years   after that and I would never fail to send him a birthday card every year on the 21st of March.

After he lost his wife, he settled down at Salem with his daughter Dr. Usha and I was able to visit him a couple of times. One day in the year 2012 I received a phone call from him. He said that the Tirupati Temple authorities, in recognition of the contribution of his father Vissa Appa Rao and his father-in-law Veturi Prabhakara Shastri to the field of classical music and Telugu literature, would be honouring him on the 1st of April at a function in Salem. He said, “Javeed, I am already 95. I do not know if I will live long enough to see you again. So, I want you to be here for this function with your family. It will make me very happy. I cannot hear what you are going to say but I am sure you have heard what I had to say. Thank you.”

That call was a completely one-sided affair. I had heard him right but I had nothing to say! He was my Guru and I was his Sishya and this is how the relationship had to be between us. His wish was my command and so I went, with my family. It was a very touching occasion. The Tirumala Tirupati Devasthanam (TTD) Board had sent two representatives with a citation and a shawl to honour him and much to our surprise he rose to the occasion by making a brief but most impressive speech in reply. Then turning to me, he clasped both my hands in his and said, “Ah, Javeed, my favourite student from Gulbarga is here. I feel so proud and happy.” That was my last and most momentous meeting with him. Just a few months later I received the news that he had peacefully departed from this world — after a long life, well-lived and a legacy of love and respect, left behind forever!

3 COMMENTS ON THIS POST To “End of the tale of two Stalwarts!”