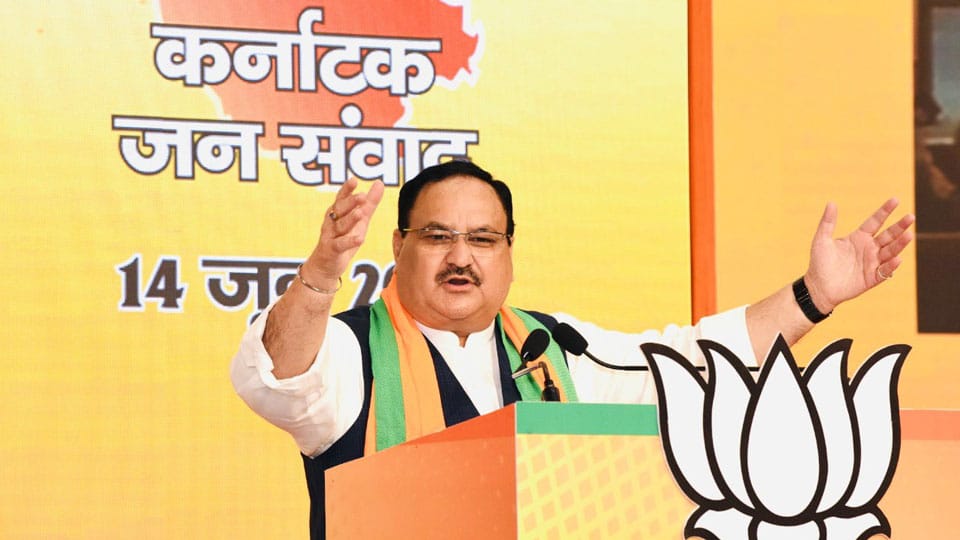 Bengaluru: BJP National President J.P. Nadda was all praise for Karnataka’s handling of COVID-19 with special mention to Chief Minister B.S. Yediyurappa (BSY) yesterday during a virtual address. Nadda highlighted the achievements of the Narendra Modi Government 2.0 as he addressed thousands of BJP leaders and workers in Karnataka as part of his Jana Samvada virtual rally.

“Chief Minister Yediyurappa has been proactive during this fight against COVID-19 with 4Ts — Testing, Tracing, Treating and Technology. With the use of technology, his Government has been able to monitor hospitals remotely, create a COVID awareness response team to keep citizens informed and fight fake news. His Government’s initiative of ‘Dasoha’ has ensured poor migrant labourers were not left hungry,” said Nadda.

He also appreciated the State Government’s decision to amend Land Reforms Act to allow easier land purchase for industries and the amendment to APMC Act allowing free markets for farmers. Throughout his address, Nadda thanked the COVID warriors as well as BJP workers who have been involved in volunteering work to help those in need.

Accusing Congress of indulging in “petty politics” during COVID-19 crisis, Nadda asked it to take ‘tuition’ from his party on how to conduct as Opposition party during such situations. Hitting back at Rahul Gandhi for his comments that DNA of openness and tolerance that India was known for has “disappeared”, Nadda asked, “are you forgetting, who is becoming intolerant, do you remember Emergency?”

“Don’t worry about country’s DNA, worry about Congress’ changing DNA, if you keep this in mind it will be good for your health and country’s political health,” he added.

Nadda said Prime Minister Modi had been leading the country from the front in the battle against the COVID-19 pandemic and the world had acknowledged it. “Modi has fought from the front… world has recognised the way Modi has led the country during COVID with bold and timely decisions,” he said. The Prime Minister was taking along everyone in the fight against Corona. “If there is any Prime Minister in the country whose words people have obeyed with respect, after Shastriji (Lal Bahadur Shastri) it is Narendra Modi,” Nadda said. People of the country followed his words religiously when he gave the call for Janata Curfew, they came out to clap for COVID warriors and to light lamps, the BJP chief pointed out.

Nadda lauded the six year-NDA rule under Modi, stating that the ‘gap’ of six decades had been ‘bridged’ in six years and the first year of his term was full of achievements, including removal of triple talaq and bringing in Citizenship Amendment Act.

Highlighting abrogation of Article 370 as another achievement of the Modi Government, Nadda said people of Jammu and Kashmir were happy with the decision. Earlier even corruption was not getting probed there. Now that the Prevention of Corruption Act has come into effect in the Union Territory, inquiry into the Jammu and Kashmir Bank fraud has begun, and the guilty will be sent to jail, he said.

3 COMMENTS ON THIS POST To “J.P. Nadda heaps praises on BSY’s leadership in handling COVID-19”