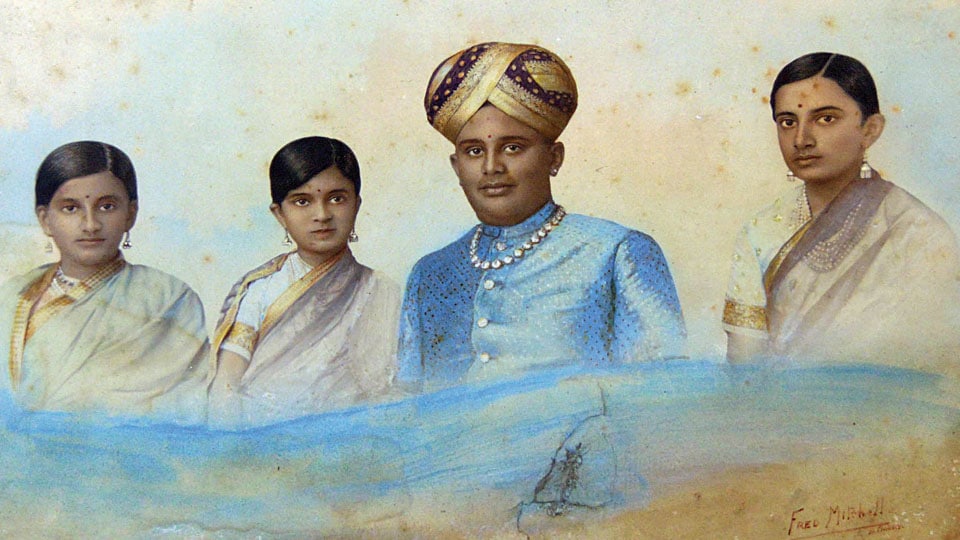 The year-long birth centenary celebrations of Sri Jayachamaraja Wadiyar, the last Maharaja of erstwhile Princely State of Mysore, has begun at the Mysore Palace today. The celebrations are being organised by Srikantadatta Narasimharaja Wadiyar Foundation headed by Pramoda Devi Wadiyar. Jayachamaraja Wadiyar, the 25th ruler of Mysore, who ascended the throne in 1940, merged the erstwhile Mysore kingdom with the Republic of India in 1950. Jayachamaraja Wadiyar, who went on to become the first Rajapramukh to discharge the duties of a Governor from January 26, 1950, had a lot of interest in art, music, sports, philosophy and many other areas. To mark the occasion, here we publish a pictorial article on the last Maharaja of Mysore by R.G. Singh of Ramsons Kala Pratishtana. —Ed

Since time immemorial, royalty has inspired artists and craftspersons to create immortal works of art. Generally, it was the royal court that patronised them which in turn led the courtiers, noblemen and laypersons to follow suit.

The Mysore royalty is no exception to this trend. According to the records available at the Divisional Archives, Mysore, several musicians, dancers, goldsmiths, silversmiths, stone masons and artists were in the regular payroll of the Mysore court. Jaganmohan Palace has in its collections, exquisite ivory miniatures of the artists who worked in the royal atelier of H.H. Maharaja Krishnaraja Wadiyar III. Later on as photography came into vogue during the reign of H.H. Maharaja Chamarajendra Wadiyar X and H.H. Maharaja Krishnaraja Wadiyar IV (KRW), the royal staff have been immortalised in albums containing colour-tinted black and white photographs which lend an artistic touch to every detail of the person. During the reign of H.H. Maharaja Jayachamaraja Wadiyar (JCW), it was fashionable to own and display royal painted photographic portraits that were created in several studios of Mysore. Thus we see many artists like Madhugiri Ramoo, M.N. Murthy, A.R. Vasu and photo studios like Burhanuddin & Sons, Raj Studio, Palace Studio, etc., create stunning portraits of royalty.

A couple of decades back, majority of autorickshaws displayed the portrait print of JCW in royal robes of yellow and red with his trademark shades. This print was quite popular because one could see it occupying prime position on the walls of almost all retail stores and stalls in the markets built by the Wadiyars.

Cut to the present day, the Mysore royalty continues to inspire craftspersons and artists to create works of art which reflect high standards of workmanship. JCW has been immortalised in various visual media as oil portraits, popular prints, paintings, as well as clay dolls.

These artefacts are testimony to the affection of Mysureans towards their beloved king. As a birth centenary tribute to Sri Jayachamaraja Wadiyar, the last Maharaja, Mysuru-based Ramsons Kala Pratishtana (RKP) presents some of the creations in this pictorial feature.

Traditional Mysore style artist B.P. Ramakrishna and alumnus of the College of Arts and Crafts, Patna, Manish Varma have collaborated to produce a set of six paintings in which JCW venerates six deities after whom, incidentally, his offsprings were named. Ramakrishna has created the deities in traditional Mysore style with gold gesso, while Manish has breathed life into the portraits of the Maharaja in various postures.

Traditional Mysore paintings started declining in popularity and patronage since early 20th century, hence we do not come across the portrait of JCW in Mysore style.

Further, JCW was a musician par excellence and has composed about 97 kritis in Karnatak music; he was also an accomplished pianist. But the visual records of him playing a piano are almost non-existent. Considering these facts, the above six portraits of JCW gains immense importance as visual aesthetic testimonies to the little known facets on the life of JCW, depicted in Mysore paintings.

Sculpture artist from Bengaluru, Venkatachalapathy has created the bust portrait of JCW based on the photograph of the latter in the grand Dasara Durbar regalia. Kolhapur-based Amar Powar has created miniature bust from the photograph of JCW when he was nominated as Yuvaraja Bahadur in early 1940.

National award-winning papier mâché artist A. Sekar of Pondicherry has created the image of JCW seated on the Mysore golden throne. A rare, old, full-body clay portrait of a young JCW, similar to latter’s Upanayana portrait, by an unknown artist finds a pride of place in this feature. Expert clay doll maker Anand from Mayavaram has created the royal couple JCW and H.H. Maharani Satyapremakumari Devi, in clay.

The painted photograph of JCW (1942) in coronation regalia by artist-photographer M.N. Murthy is an excellent specimen. Celebrated Palace artist Y. Nagaraju, who hailed from the family of traditional artists, has painted a young JCW receiving blessings from his mother H.H. Yuvarani Kempucheluvajammanni.

Another painted photograph by Fred Mitchell shows a young JCW with his three sisters Rani Vijaya Devi (Kotda Sangani), Rani Sujaya Kanthammanni and H.H. Maharani Jaya Chamundammanni (Bharatpur). A popular colour print of the last two Maharajas and the Yuvaraja published by The Maharaja Frame Works, is an interesting specimen.

Portraiture is a genre of art which not only commemorates but also celebrates the life of a person. If art gets inspired by someone even long after he or she is gone, it implies that the person is still alive in the collective memory of people. Sri Jayachamaraja Wadiyar has inspired a generation of Mysureans with his life, philosophy and music.

Here’s wishing a Happy 100th birthday to the Philosopher-King of Mysore.