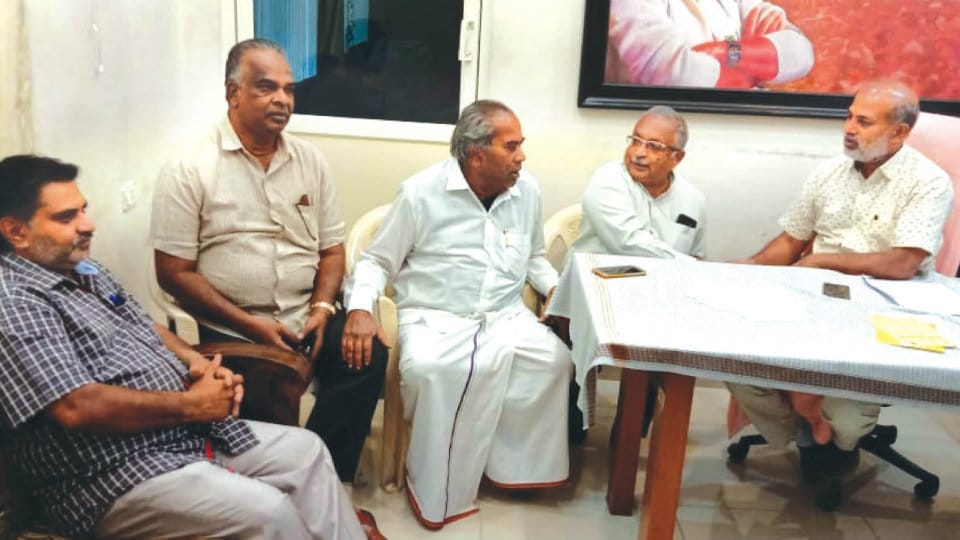 JD(S) to get coveted Mayor’s seat; Congress will have Deputy’s post

Mysuru: The Mayoral election for the second term of the current tenure of the Mysuru City Corporation (MCC) has been scheduled to take place on Jan.18 and this time too, the alliance between the Congress and JD(S) will continue with the coveted Mayor’s seat going to JD(S).

The Government had announced the reservation matrix for Mayoral polls in December last, according to which the Mayor post is reserved for Backward Class-A (BCA)- woman and the Deputy Mayor post for SC category.

At a meeting of JD(S) and Congress leaders headed by MLA S.R. Mahesh yesterday, the leaders held talks on power-sharing in order to stop the BJP from bagging the Mayor and Deputy Mayor’s posts. Buoyed by the emphatic victory of the party in the recently held Assembly by-polls, the BJP which does not have enough numbers to attain power in the 65-member MCC is said to be making behind the scene moves to wrest the Mayor’s post.

The Congress and JD(S), by entering into an agreement, kept the BJP, which had the highest number of Corporators (22), out of power.  The BJP has 22 Corporators, Congress 19, JD(S) 18, BSP 1 and 5 Independents.

The Congress and JD(S) had entered into an agreement in 2018-19, decided to hold the Mayor’s post on a rotation basis. The Congress staked claim and got its candidate Pushpalatha Jagannath elected as Mayor. Now, it is the turn of JD(S) to occupy the Mayor’s post, with a Congress member as the Deputy Mayor.

Others who participated in the meeting were Congress unit chief R. Murthy, former Mayors Ayub Khan and Arif Hussain and JD(S) leader K.T. Cheluvegowda. The Congress pledged its support to the JD(S) and said it is free to field its candidate for the Mayor’s post.

As the alliance issue is clear now, both the parties will hold a joint meeting to take a decision on sharing of posts of Standing Committees. Mahesh, in consultation with local leaders and former CM H.D. Kumaraswamy, will announce the Mayoral candidate.

Reshma Banu of Ward 17-Bannimantap, Namratha Ramesh of Ward 22-Paduvarahalli, Taslim of Ward 26-Meena Bazar, K. Nirmala of Ward 45-Sharadadevinagar are the aspirants for the Mayor’s post from JD(S) while Pradeep Chandra of Ward 15-Rajendranagar, Bhuvaneshwari of Ward 60-Ashokapuram, C. Sridhar of Ward 38-Giriyabovipalya and S. Sathyaraj of Ward 39-Gayathripuram First Stage are the aspirants of Deputy Mayor’s post.

The election to Mayor and Deputy Mayor posts will be held on Jan. 18, Saturday at 11 am at Nalwadi Krishnaraja Wadiyar Auditorium. Nomination papers are being distributed at the Office of Council Secretary. All the documents along with nomination papers must be submitted by the candidates before the Council Secretary at his Office (Room 1) for scrutiny between 7.30 am and 9.30 am.