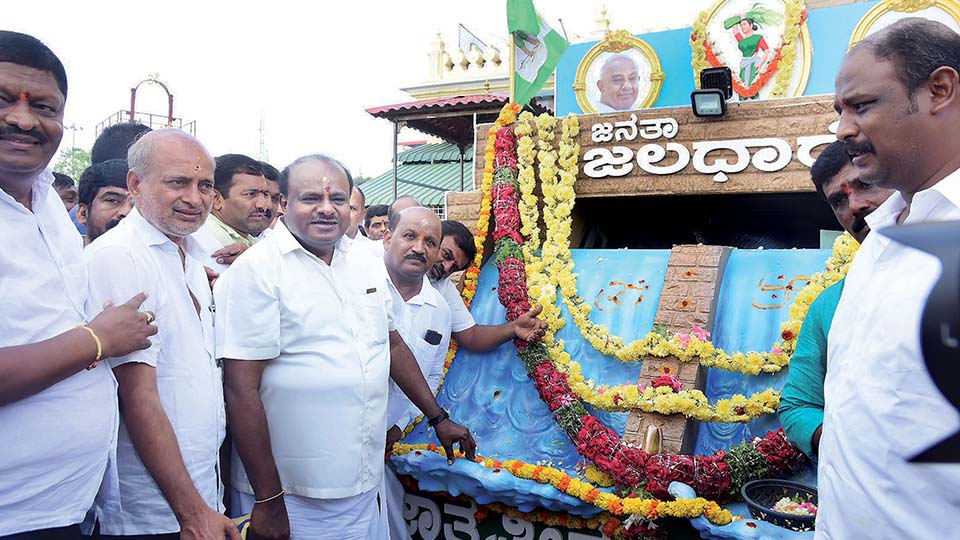 We will complete all water projects if voted with a full majority: H.D. Kumaraswamy

Mysuru: Setting its eyes on the 2023 Assembly polls, the JD(S) today launched the campaign vehicles for its much publicised ‘Janata Jaladhare’ (water yatra), aimed at highlighting the ‘injustice’ meted out to Karnataka by the Centre in implementing various irrigation and drinking water projects.

Former Chief Minister and top JD(S) leader H.D. Kumaraswamy flagged off a campaign vehicle that is modified as a Ratha, after performing puja at Chamundeshwari Temple atop Chamundi Hill here this morning.

Speaking to press persons on the occasion, Kumaraswamy termed Chief Minister Basavaraj Bommai as ‘Mauni CM’, after accusing him of being silent on the recent goings on in the State that is causing divisions among communities in the society.

Questioning Bommai on what he is doing to stop Right wing groups from having a free run, Kumaraswamy wanted to know whether the BJP Government has arrested anyone in connection with the recent communal incidents in the State.

He urged the Bommai Government to rein in Hindu groups which are out to divide the society on communal lines, with the Assembly polls just a year away.

Appealing the people to vote JD(S) with a full majority for five-year term, Kumaraswamy said that he will dissolve the party if it does not keep its  promise and he was saying this in front of Goddess Chamundeshwari, who is considered as ‘Shaktidevathe.’

Asserting that the JD(S) would not join hands with any other party, he said the party was not fighting to win just about 30 to 40 seats, but was working out plans to win a comfortable majority of its own. Maintaining that JD(S) was carrying out issue-based campaign and not religion-based campaign, the former CM said that his party would never indulge in acts aimed at dividing the society.

“Our fight is only for the development of the State. The ‘Janata Jaladhare’ is aimed at highlighting the failure of the State Government in tapping/ harnessing water resources. The yatra will have 10 campaign vehicles covering more than 180 Assembly segments. The modified vehicles will travel to several water sources and rivers and collect water in vessel, following which Ganga Puja will be offered to it everyday,” he said adding that senior party leaders and elected representatives will be part of the campaign, which will be officially launched on Apr. 16, marking Hanuma Jayanthi.

Declaring that JD(S) has formally launched its campaign for the 2023 Assembly polls today itself with the flagging off Ganga Ratha vehicles, he reiterated that his party was committed for completion of all water projects.

Drawing a difference between the recently concluded ‘Mekedatu Padayatra’ of the Congress, Kumaraswamy argued that the Padayatra was  merely a gimmick of Congress for fetching votes, while the JD(S) party’s ‘Jaladhare Yatra’ is set out with an objective of shedding light on the plight of people and sharing of information on various issues confronting the State.

Even as Kumaraswamy was performing puja at the Hill temple, RDPR Minister K.S. Eshwarappa visited the temple. The two leaders shook hands and exchanged pleasantries.