JD(S) to be strengthened under G.T. Devegowda’s leadership in Mysuru region: H.D. Kumaraswamy

Mysuru: The rift in JD(S) arising out of perceived efforts to field A.H. Vishwanath or the party leader H.D. Revanna’s son Prajwal from Hunsur Assembly constituency in the 2018 Assembly polls seems to have been resolved.

A closed door meeting was held between Chamundeshwari MLA G.T. Devegowda (GTD) and the party State Unit President H.D. Kumaraswamy at the former’s residence at Vijayanagar here yesterday to iron out differences.

Speculation of the rift within the JD(S) surfaced following conjectures that either Prajwal or senior Congress leader A.H. Vishwanath, who has been sidelined in the party, were to be fielded from Hunsur. This incensed G.T. Devegowda, who was keen to field his son Harish Gowda from there.

At a district level meeting of the party held a few weeks ago, there was a fracas between the supporters of GTD and Kumaraswamy.

Soon after yesterday’s meeting, Kumaraswamy who spoke to press persons said that there was no difference of opinion among the party leaders in the district. The misunderstanding arriving out of the behaviour of a few party workers has been resolved, he said and added that the contribution of GTD and his family to the party is immense and it will continue in the future as well. 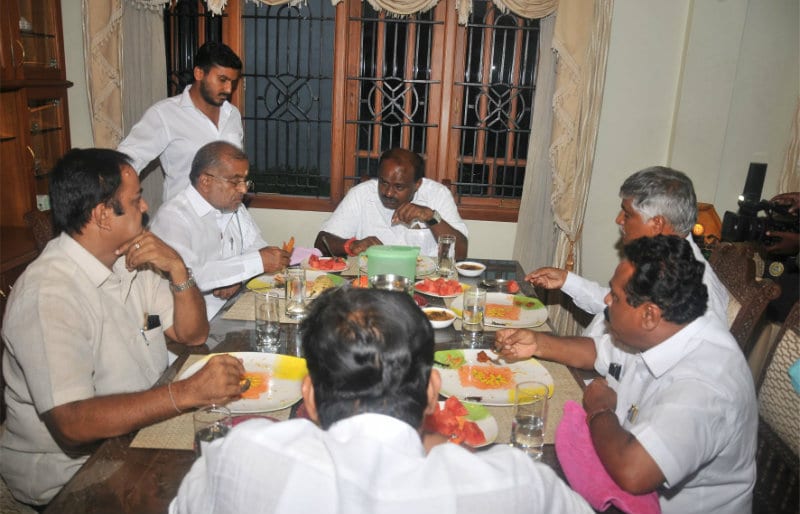 Maintaining that party MLAs G.T. Devegowda, S.R. Mahesh and Chikkamadu were together, Kumaraswamy said the three  leaders will strive for strengthening the party organisation.

Pointing out that the JD(S) was aiming to win 9 out of the 11 Assembly segments in the district, he said that he was a well wisher of GTD’s son Harish Gowda.

Kumaraswamy denied that there was any confusion over the party’s choice of candidate from Hunsur. MLA G.T. Devegowda said that he was ready for any sacrifice for the sake of the party. Maintaining that his family was committed to work under the leadership of Kumaraswamy, he said “our objective is to ensure that Kumaraswamy becomes the Chief Minister again”.

2 COMMENTS ON THIS POST To “JD(S) to be strengthened under G.T. Devegowda’s leadership in Mysuru region: H.D. Kumaraswamy”