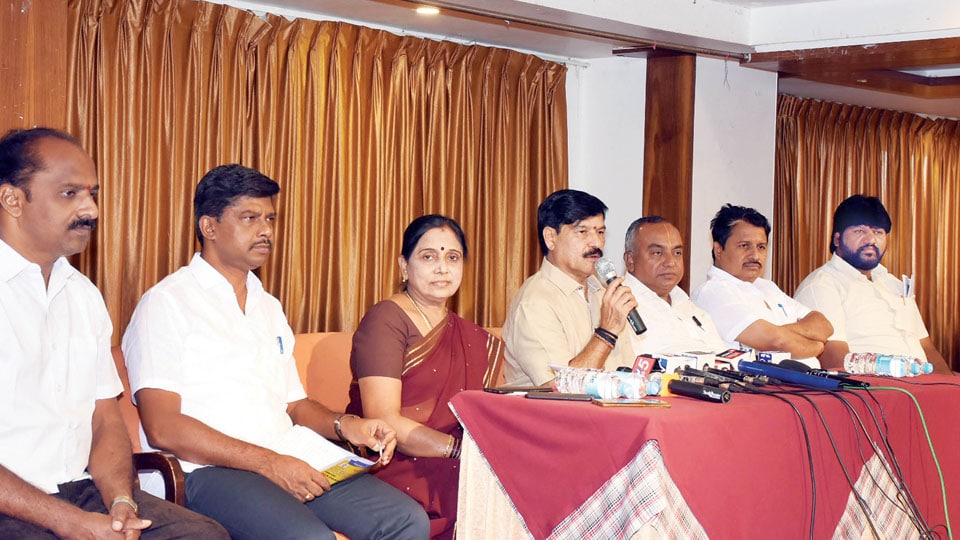 Mysore/Mysuru: Taking forward the Centre’s concept of ‘Samartha Bharat’, Skill Enhancement and Job Generation and Registration  Mela will be held at five places in KR Assembly segment limits from Jan. 4 to 8. Announcing this at a press meet at a private Hotel here yesterday, KR MLA S.A. Ramdas said that the Mela has been organised in association with  Labour, Skill Development, Industries, Horticulture, Tourism, Animal Husbandry, Urban Development and Co-operation Departments.

Pointing out that candidates with qualifications ranging from eighth standard, collegiate education and technical degrees can take part in this Mela, the MLA said that college dropouts, job searchers, job losers and members of women Self-Help Groups (SHGs) too can attend.

Explaining the procedure for registration, Ramdas said that candidates are required to register their name by choosing a specific skill-set and training.

Maintaining that more than 100 reputed companies have agreed to take part, Ramdas said that CM Basavaraj Bommai will virtually inaugurate the Mela at Vidyashankar Kalyana Mantapa near Gun House Circle at 9 am on Jan. 4 in the presence of District Minister S.T. Somashekar and a host of officials including Mysuru DC Dr. Bagadi Gautham and MCC Commissioner G. Lakshmikantha Reddy. Candidates residing in MCC Ward Nos. 50 to 53 can take part in the Mela on Jan.4, he added.

He further said that the Mela is also open for candidates from other parts of the district. The 5-day Mela will also feature a COVID vaccine drive, during which teens in the age group of 15 to 18 years will be vaccinated.

Referring to Modi Yug Utsava he had held marking the birthday celebration of PM Modi and 75th year of Independence in September last, Ramdas said that the event has earned widespread praise and some States have shown keen interest in this programme.

City BJP President T.S. Srivatsa, who also addressed the press meet, said that a week-long ‘Poshan Abhiyaan’ drive will take place in city from Jan. 8 to 14.

ONE COMMENT ON THIS POST To “Job registration melas at 5 places in KR Assembly from Jan. 4: Ramdas”