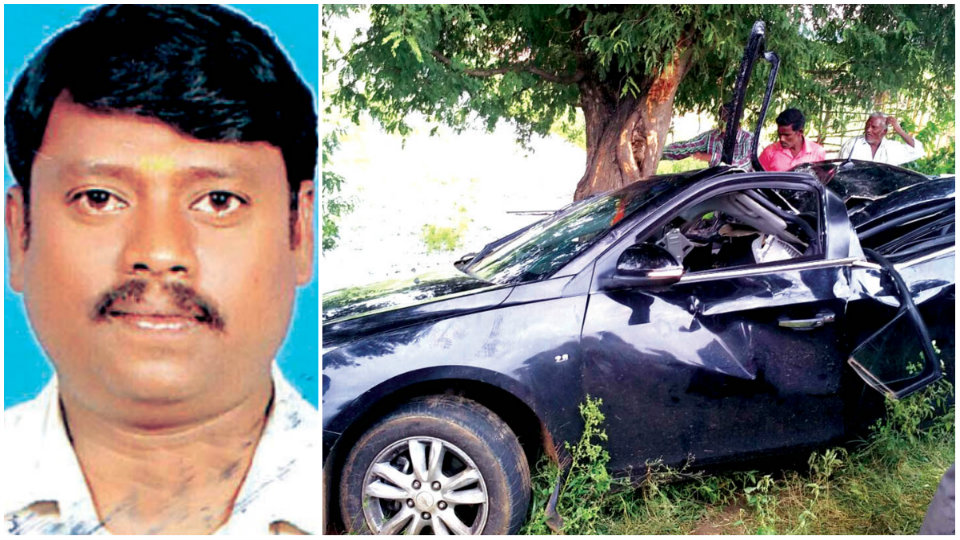 Journalist among two killed as car rams into tree

T. Narasipur: In a tragic incident, a journalist was among two persons who were killed on the spot and four others injured, after the person behind the wheels lost control of the car resulting in the car toppling and ramming into the tree near Talkad yesterday.

The deceased have been identified as M.G. Rajesh (40), son of Girimallaiah, a resident of Srirampura, who was working as a Senior Sub-Editor of Vijayavani Mysuru Edition and his sister-in-law Mahima (37), wife of Manjuswamy.

Those injured have been identified as 38-year-old Bhagyalakshmi, 10-year-old Bhoomika, 18-year-old Harshavardhan and 12-year-old Jaganmaya. All the injured who suffered minor injuries were treated at a    hospital nearby.

It is learnt that Rajesh along with others, after attending a naming ceremony at Mudukuthore, was returning in a Chevrolet car (KA-09 MC-3353).

After refuelling at Talkad, the elders wanted to show Talkad to the children and the person behind the wheels instead of going towards Mudukuthore took a turn to Kukkuru Medani Road and lost control of the car near Arundatinagar resulting in the car toppling and coming to a standstill after ramming into a tree.

Rajesh and Mahima, who were severely injured, died on the spot, while the others escaped miraculously with minor injuries.

Talkad SI Ramesh and staff, who rushed to the spot, conducted mahazar and shifted the deceased to T. Narasipur General Hospital where post-mortem was conducted this morning and the bodies were handed over to the family members.