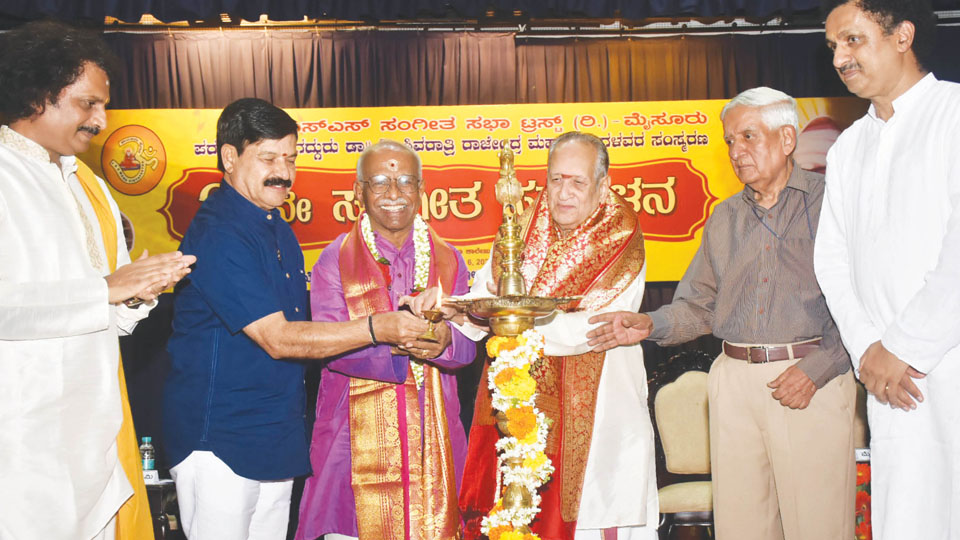 Mysore/Mysuru: Observing that Arts and Culture are a means of measurement of our civilisation, Vidwan V. Nanjundaswamy, the President of the 27th JSS Sangeetha Sammelana (Music Conference), said that as such, talented artistes are rated highly in the society.

He was speaking during the inauguration of the five-day 27th JSS Sangeetha Sammelana organised by JSS Sangeetha Sabha Trust at Navajyoti auditorium in JSS Women’s College in Saraswathipuram here yesterday.

Noting that we are in an era where Computers, Robots, Internet, Google, etc. rule the world, Vidwan Nanjundaswamy, making a reference to COVID pandemic, said that the pandemic, which took out the lives of lakhs of people in two years, has taught us on how to respond to the plight of fellow human beings.

Bemoaning that not many youths are seen at musical and cultural events, he said that the youth of today seems to have lost patience for hearing. Maintaining that hearing and responding are vital for blossoming of talent, he said that artistes should practice with patience for achieving expertise and not go after attaining  instant popularity. Then only success can be achieved in their set goals, the Music Scholar pointed out.

Vidwan Nanjundaswamy said that apart from giving a patient hearing, an artiste should also be diligent. He opined that knowledge earned through Arts should not lead to arrogance. Asserting that health and peace of mind are vital for an artiste, he said that the lives of Vachana writers, Saints, Seers, Music Maestros and the like should be a model  for every artiste.

Stressing on the need for opening up to science and technology, he said we are now living in an era of Computers, Robots, Global Village, Work From Home  etc. As such, it is vital for artistes to open themselves up to technology, he said adding that arts and music must be spread more among  the population by using modern means of communication. Vidwan Nanjundaswamy lauded JSS for having successfully organised this Music Festival for the last 26 years.

MLA S.A. Ramdas, in his address, said that Mysuru musicians have contributed a lot for the world of music. The erstwhile Mysuru rulers and Gurus are responsible for this, he said.

Contending that several artistes and other professionals are facing depression or mental stress due to the pressures and compulsions of modern day life, Ramdas opined that relishing  music will help a lot in relieving stress. He also noted that Music Therapy introduced in NIMHANS  a decade ago, has proved fruitful.

Arguing that Basic Science should be converted into an Applied form in Music, Ramdas announced that  he was ready to give Rs. 25 lakh as initial grant for the purpose.

Vidwan Mysore M. Manjunath too spoke. Earlier, Vidwan V. Nanjundaswamy, the Conference President, was brought to the venue in a procession,  accompanied by a number of folk troupes.