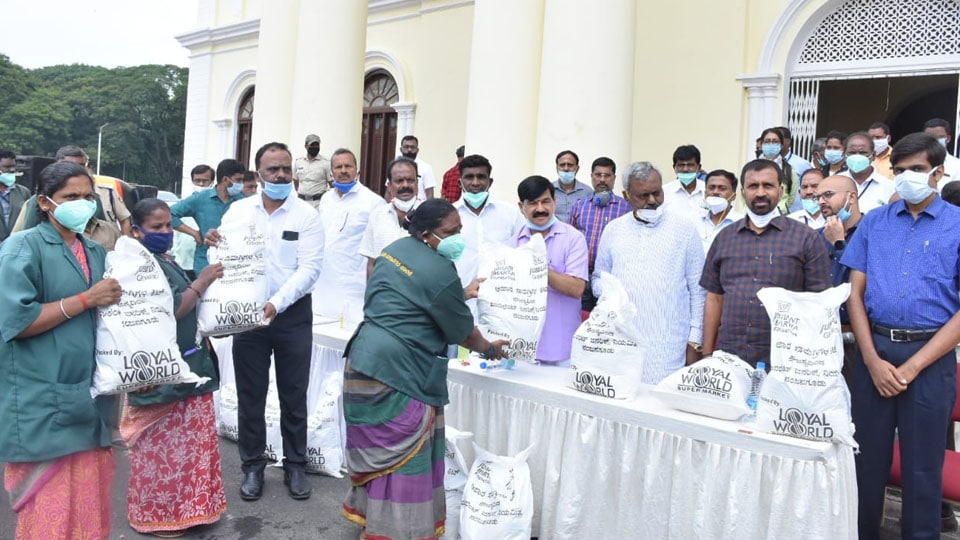 MLA S.A. Ramdas, who addressed the Pourakarmikas on the occasion, said: “You are the ‘Corona Warriors’ who worked to keep the city clean amidst lockdown. In the whole of South India, Mysuru district is known to be handling COVID-19 situation well. In this, even your contribution is worth mentioning. Everybody, from people’s representatives to officers and staff at various levels, Pourakarmikas, have worked with discipline and co-ordination, as a result of which Mysuru could work effectively against the pandemic.”

MLA L. Nagendra, who spoke, said: “You, Pourakarmikas, have worked selflessly and because of that, the district has been successful in handling this crisis.”

Deputy Commissioner Abhiram G. Sankar, said: “Pourakarmikas have worked even in Containment Zones. Virus may spread in any form of waste. But still, Pourakarmikas have worked successfully taking all precautions. Your health is also important to us. Government employees have the risk of contracting virus, hence you must take many precautions in your lifestyle and take care of your family also. Let us continue this co-ordination in future too.”

Speaking to media on the sidelines of the programme, District Minister Somashekar said that there is no concept of Red, Yellow and Orange Zones now and restrictions have been relaxed. In view of this, the Chief Minister has written a letter to the Central Government to give nod to Hotel services and opening of Temples and Malls.

Dismissing that the grocery kit distribution was a damage control attempt by the Jubilant Company, the District Minister said: “Central and State Governments have given nod to open the company. But District Administration has not given permission yet as it is appointing officials to check precautions to be taken before reopening the company; Once the process is complete, permission will be given to open the company.”