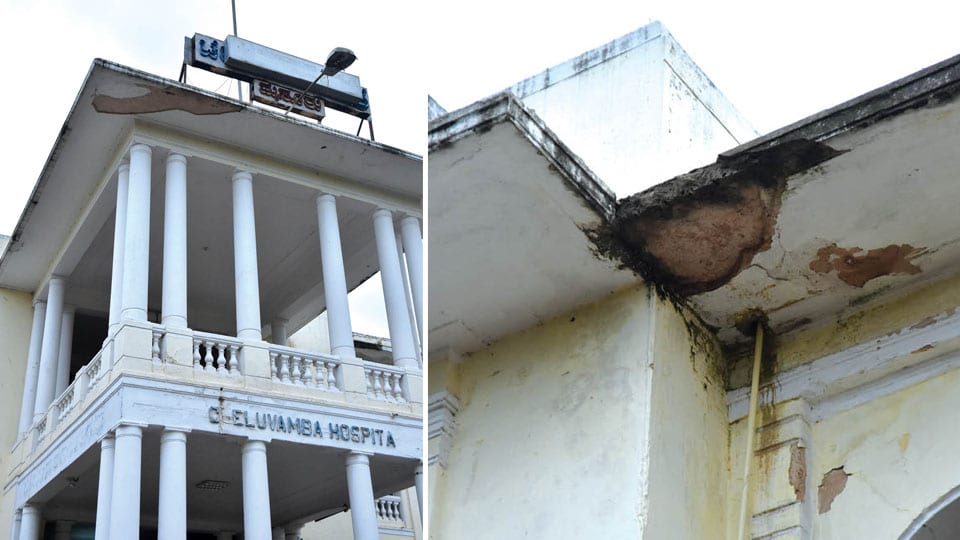 Mysuru: The nearly century-old Government-run K.R. Hospital, popularly known as ‘Doddaspathre’ among the masses, Cheluvamba Hospital, PKTB and MMC&RI buildings, which are heritage structures, are in a shambles due to poor maintenance and negligence by authorities.

Recently, the portico of Fire Brigade building at Saraswathipuram, which is also a heritage structure, collapsed due to heavy rain. In the past, parts of the over-century-old Devaraja Market and Lansdowne Building have collapsed. But neither the District Administration nor the Mysuru City Corporation (MCC) seem to be in a hurry to take a firm decision on the fate of the two iconic buildings.

While the Lansdowne Building close to K.R. Circle is totally shut down, the northern portion of Devaraja Market building has been evacuated as a  safety measure.

Regarding the state of K.R. Hospital and Cheluvamba Hospital, shifting of patients poses a big challenge as there will be over 1,500 inpatients at any given point of time at both the hospitals.

The Out Patient Department, Radiology, Pathology, Burns Ward and Administrative Blocks are in a dilapidated state, endangering the lives of patients. These buildings have developed cracks here and there and patches of roof plastering often come apart. There are also complaints of rain water seeping through the roof.

The condition of Cheluvamba Hospital, Children’s Block, MMC&RI main building, old exhibition building, Anatomy, Nursing School, mortuary, canteen structures and the PKTB Hospital on KRS Road are no better, with most parts of the structures in poor structural condition.

With the nearly a century-old MMC&RI building and the attached K.R. Hospital building becoming dilapidated, MMC&RI Director Dr. C.P. Nanjaraj has written to the Public Works Department (PWD) for renovation of the buildings.

The PWD, after preparing Rs.67 crore estimate, has already submitted a proposal to the DPAR for approval. But nothing has moved beyond that.

Although the MMC&RI has been sending repeated reminders to the Government on the urgent need for renovation works, the pleas seem to have fallen on deaf years as nothing concrete has happened on the renovation of the hospital buildings, which have a heritage character.

The MMC&RI has sought Rs.67 crore, including Rs.13.89 crore for its building, Rs.21.02 crore for Cheluvamba Hospital and Rs.30 crore for K.R. Hospital. But it has become a matter of concern as the State Government has ignored the pleas for immediate renovation of the nearly century-old iconic buildings which are in a sorry state.