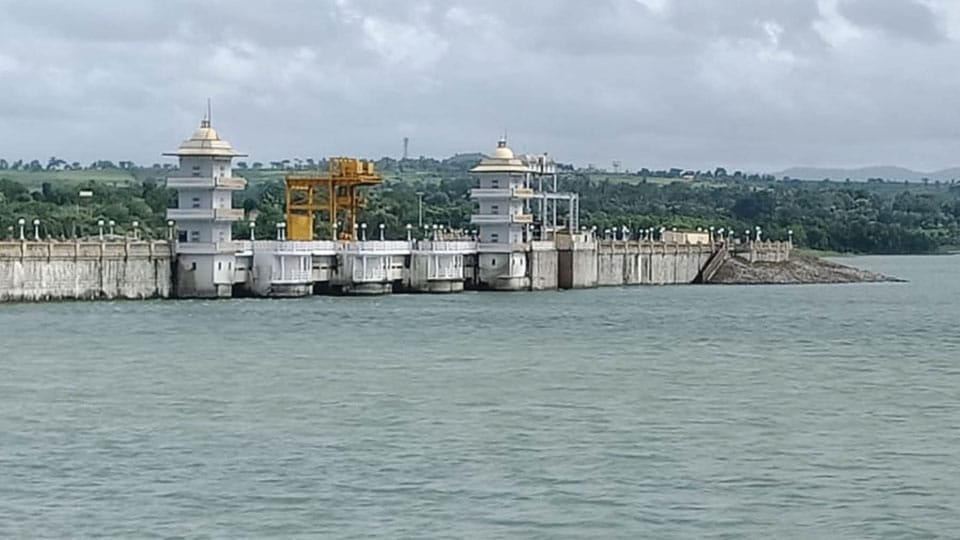 Mysore/Mysuru: With just 3.1 ft water for Kabini Dam in H.D. Kote to fill to the brim, over 30,000 cusecs of water has been released from the Dam with a warning to residents living downstream asking them to move to safer locations. The decision to release water has been taken as a precautionary measure to ensure the safety of the Dam.

The increase in outflow is due to heavy rains in the upstream areas of the Dam and the catchment area of Kabini, which includes the Wayanad region of Kerala. This noon, the water level was at 2280.90 ft (17.57 tmcft – thousand million cubic feet) as against the full reservoir level at 2,284 feet.

While 25,000 cusecs of water is being released from the four crest gates of the Dam, 5,000 cusecs is being released from Subhash Kabini Power Project, said Kabini Dam Executive Engineer Janardhan. Today at noon there was an inflow of 25,267 cusecs and it will only increase as it is raining cats and dogs in Kerala and also in Kodagu Brahmagiri Hill ranges that contribute to the inflow to Kabini.

As 30,000 cusecs of water is being released, the Soolekatte Bridge in front of the Dam is submerged and traffic movement from Hand Post to Begur via Bidarahalli, Theranimanti, Nanjanathapura, Kandegaala, Mosarahalla, Basapura, Kalasur, Kenchanahalli, Moorbandh, Bheemanakolli, N. Begur, Jakkalli, Beeramballi and Gandethoor has been disrupted.  Meanwhile, the Karnataka State Natural Disaster Monitoring Centre (KSNDMC) has issued a forecast for widespread moderate to heavy rains in Kodagu and Idukki, Malappuram, Kozhikode, Wayanad, Kannur and Kasaragod in Kerala.

More water would be released in the coming days if the downpour continues, said Dam officials. As such, River Kapila will be in full spate causing floods in the areas around the famous Srikanteshwaraswamy Temple in Nanjangud, Lord Parashurama Temple, Snana Ghatta (bathing point for devotees) and  like Hadinaru Kaalu Mantapa, Sopana Katte and Mudikatte.

Villagers around the Kabini Dam told Star of Mysore that whenever water is released from Kabini, they face flooding problems. As the bridge downstream is submerged, links with several villages have been cut off. They alleged that since years they have been demanding the construction of a new bridge but the Government has not responded.