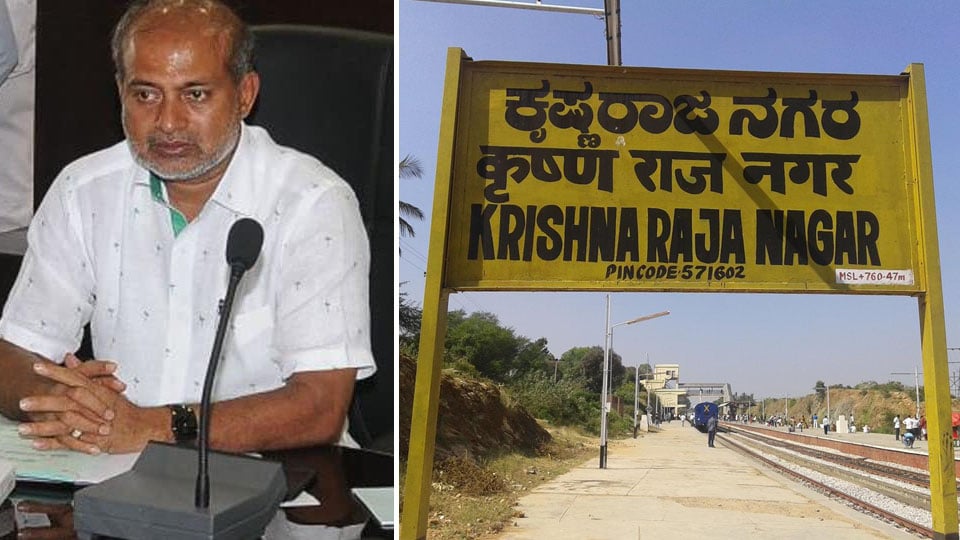 Mysuru: As Mandya is called the ‘Sugar Bowl’ of Karnataka, K.R. Nagar or Krishnarajanagar is the ‘Paddy Bowl’ of Karnataka. Little after June every year, one can find a vast expanse of lush green paddy fields after the sowing season. A majority of people in K.R. Nagar depend on agriculture for livelihood and the rest of the population depends on business.

Luckily for the farming community, the Assembly elections have come a month before the sowing season starts. Otherwise, they would have been politicking instead of getting into the paddy fields.

Coming to the electoral scene in this ‘Paddy Bowl’, with the date of polling fast approaching, political parties are indulging in various strategies to ensure their candidate’s victory. Incumbent MLA S.R. Mahesh of JD(S), who won in 2008 and 2013, is eyeing his hat-trick win this time.

S. Nanjappa of Janata Parivar and A.H. Vishwanath of Congress (now in JD-S) who won from this constituency, had become Ministers. But both of them failed to win three times continuously. S.R. Mahesh, who has won from this constituency twice (2008 and 2013) is confident of winning this time too as his strong opponent from Congress A.H. Vishwanath is now in the JD(S) and is likely to contest from Hunsur.

In 1967, M. Basavaraju and in 1962 K.S. Gowdaiah won by contesting as Independent candidates. Till now, K.R. Nagar constituency has seen fights only between JD(S) and the Congress and this time, the BJP is planning to open its account in the constituency.

Ravishankar lost the 2013 polls to S.R. Mahesh and this time, Chief Minister Siddharamaiah hopes to deny him a third win by naming Ravishankar, a Kuruba candidate. Among the contenders for the Congress ticket was Aishwarya Mahadev, daughter of the former MLA Manchanahalli Mahadev, who was a close associate of the CM. However, Siddharamaiah chose to name Ravishankar, a move that analysts perceive as a gambit to win over the community at a time when he has drawn flak from leaders of the community.

Though the BJP has not won a single time in K.R. Nagar, there are aspirants fighting for the ticket. Among them are, BJP District Vice-President Mirle Srinivasa Gowda, Hosahalli Venkatesh, who quit the JD(S) and joined BJP and BJP District Spokesperson Gopal’s wife H.G. Shwetha Gopal.

Shwetha Gopal, who has the experience of contesting in Zilla Panchayat election, is confident that the BJP would give her ticket if the party decides to field a woman candidate. However, it is yet to be known who will be the BJP face in K.R. Nagar.

Since 10 years, though I am in the Opposition and as an MLA, I have obtained funds from the Government and have undertaken many developmental works in the constituency which has been appreciated by the voters of the constituency. This apart, I have been personally helping many people in the constituency irrespective of caste and religion. As a social worker and an MLA, the works I have done will help me and this time the voters will bless me by helping with a hat-trick win.”

CM Siddharamaiah, during a public meeting, has guaranteed me the ticket and I am confident that the Congress would announce my name officially. This time, the voters are inching towards Congress. With CM’s pro-people schemes and because of his able administration, the Congress is sure to win this time. I have been in politics since 10-12 years and the developmental works I had taken up as a Zilla Panchayat Member twice, will help me win.”

I had contested as a BJP candidate in 1994 and I have been in the party since many years besides working for strengthening the party. I am now the District BJP Vice-President and I am confident that I would be given the ticket. There would be a triangular fight in K.R. Nagar this time.”

I am in politics since 20 years. I was a JD(S) worker and had worked for the win of S.R. Mahesh. But due to his indifferent attitude, I joined the BJP. My wife Nalini Venkatesh is a Zilla Panchayat Member and has worked honestly. Since B.S. Yeddyurappa has assured me a ticket, I am confident of getting it. If I contest as a BJP candidate, the voters of the constituency will help me win.”

My husband Gopal is in BJP since 28 years and is the party’s district spokesperson. I have contested for ZP election once. The people of the constituency have expressed their desire that I contest. If the party decides to field a woman candidate, I am confident that the ticket would be given to me and become the first woman MLA of the constituency.”