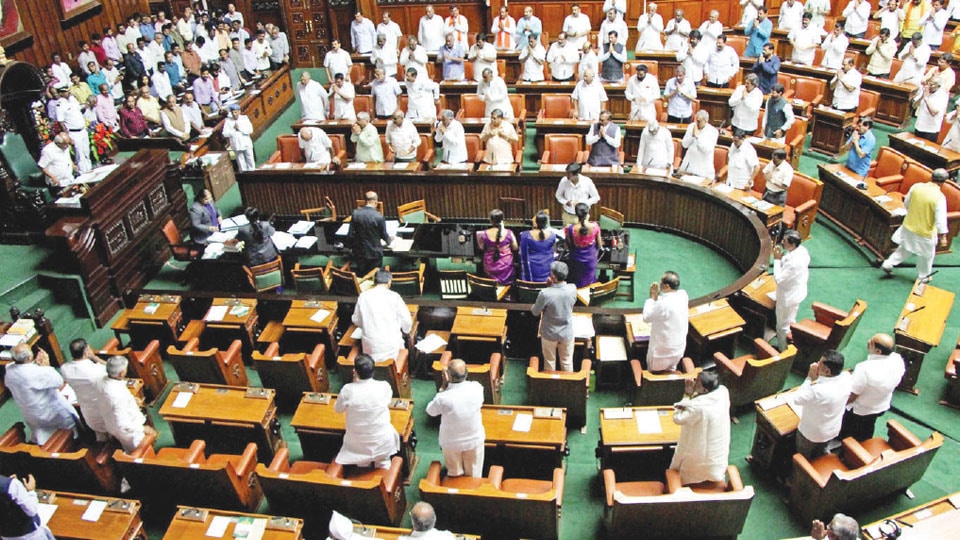 Meanwhile, the Supreme Court this morning adjourned the hearing on the plea of two Independent MLAs (R. Shankar and H. Nagesh) till Wednesday seeking a direction to the Speaker to forthwith conduct the Floor Test in the House.

Observing that the Court is optimistic that the Speaker will hold the Floor Test today, the CJI Ranjan Gogoi-led Apex Court Bench kept the matter for Wednesday while taking note of Karnataka Speaker’s submission that Trust Vote would take place by the end of the day today.

“We will seek operational order tomorrow if the Speaker defies the undertaking (given through his Counsel) that he will conclude the Trust Vote by 6 pm today,” said Senior Supreme Court  Advocate Mukul Rohatgi, who represents the two Independent MLAs.

“Even as the Session began at 10 am this morning, CM Kumaraswamy is resting at the Taj West End Hotel. His message seems to be clear that he will continue to loot and waste tax-payers money to the very last second as CM. He and his party will be answerable to Kannadigas very soon,” tweeted the Opposition BJP, with CM Kumaraswamy reluctant to take the Floor Test even today.

“Karnataka Speaker K.R. Ramesh Kumar is doing his job as per House rules and he has already fixed 6 pm deadline for the JD(S)-Congress Coalition Government to prove majority,”  Abhishek Manu Singhvi, who represented the Speaker, told the Supreme Court.

The Karnataka Assembly was adjourned late night yesterday till today without voting on the confidence motion moved by the Chief Minister even after three days of continuous debate, amid ruckus by Congress and JD(S), which insisted that the voting can await the Supreme Court ruling.

As the House debated the motion with frequent scenes of pandemonium, Congress made its intentions clear right from the beginning that voting be deferred as the Apex Court was seized of pleas by two Independent MLAs on the issue of Trust Vote.