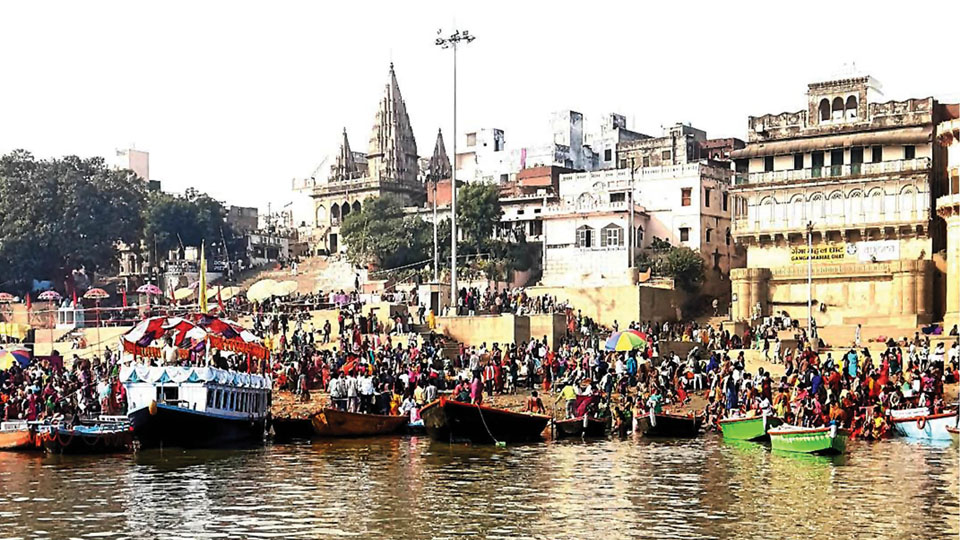 I have travelled extensively both within and outside the country, including holy places of nearly all faiths. But never was I more overwhelmed than during my visit to Kashi, also known as Benares and many other names. Not just for religious reasons alone, but by the totality of the experience.

Kashi is soaked in legend, beliefs, stories and sights. It is believed that Lord Shiva lived here and the Pandavas came to Kashi to redeem their sins committed during the Kurukshetra war by bathing in the holy Ganga. The sheer spectacle of the mass of humanity that this city attracts is a sight to behold.  The ash smeared Sadhus, burning of dead bodies, private rituals performed at the Ghats, people meditating and practicing austerities along the river Ganga, adds a sense of mysticism to the place.

What I record here are my impressions from the visit based on what I saw and gathered talking to both my hosts and enthusiastic local guides in Kashi.  It is said that the description of Kashi is like the proverbial five blind men describing the elephant. Here is my version.

Though Kashi had always been on my travel list, stories of the polluted Ganga, the poor hygiene of Kashi, extreme weather, crowds, dust and noise had dampened the interest to undertake the visit. But the Clean Ganga Campaign by Prime Minister Modi and investments made to clean and spruce up Benares post-2014 general elections, revived my interest to visit. The invitation to join a group of North Indian friends including a few residents of Kashi, helped to firm up my travel plans. On hindsight, it was the best decision that I took. Local contacts help immensely to certain privileges.  Particularly to bypass long lines of devotees at important shrines such as the Kashi Viswanath Temple. The city too is a maze of narrow lanes and bylanes.  During the day, the million-plus population of the city and an equal number of visitors on festival days fill up the alleyways to its brim.

My visit to Kashi on 22nd November 2018 was to coincide with Dev Deepavali, the festival of lights on Karthik Purnima day.  Thousands of lamps also called ‘Diyas’ are placed on the steps of the ghats. As darkness descends, the spectacle is breath-taking. A river cruise on the Ganga covering a distance of about eight kms is an ethereal experience.

The arthi that is performed in tune with the vedic chants and ringing bells is a very unique sight.  It is believed that a dip in the holy Ganga on Dev Deepavali day will cleanse a person of all earthly sins. According to the Legends, Gods too descend to earth to take a dip in the holy waters. While many in my group braved the cold and immersed themselves into the chilly Ganga, I stood a fair distance justifying to myself that my sins were not as serious to warrant a dip !

Kashi is an ancient city.  While some say it is 3,000-years-old, others claim it to be 5,000 years.  But it is a fact that it is one of the oldest cities in the world, older than the ancient cities of Egypt, Athens or Rome.  For the Hindus, it is the holiest city and a place where all Hindus would like to visit at least once in their lifetime. As per records, Kashi has 23,000 temples, the most important being the Kashi Viswanath Temple dedicated to Lord Shiva, Kala Bhairava Temple and Mrityunjaya Temple.

Inside the Kashi Viswanath Temple is the Jyotirlinga of Shiva, which has a very special and unique significance in the spiritual history of India. A visitor will notice small shrines on almost every street and each one of them being worshipped. Kashi is also called the city of death. To die here or to have one’s body cremated here is to be liberated from the eternal cycle of life and death.

While what is stated above may have similarities with other places of religious importance, what sets Kashi apart is the spirit and resilience to survive and rebuild itself over and over again. More than five hundred years of Moghul rule witnessed several attempts to destroy the temples that symbolised Hindu faith. Kashi being a religious place where idol worship was a tradition, it represented everything that the Muslim rulers wanted to destroy. While these campaigns did impoverish the temples, faith and belief remained intact.

It is also interesting to note that Kashi has been a seat of learning from time memorial. Art, music and skill flourished here.  Kashi also attracted scholars from across the world to either visit or to find residence here. It is believed that there is an energy field in Kashi that inspires learning and thinking. Tulsidas wrote his epic poem on Rama’s life called Ram Charit Manas in Varanasi. Several other major figures of the Bhakti movement were born in Varanasi, including Kabir and Ravidas. Buddha delivered his first sermon in Sarnath, close to Kashi. Aryabhatta, the great mathematician, is from this region. The tradition has continued to this day. Kashi Vidyapeeta, Sampuranand Sanskrit University, and the well-known Banaras Hindu University (BHU) are located here.

Kashi is also  known for its heritage in music, literature, art and craft. It is a cherished name in the art of silk weaving. The Banarasi silk sarees and brocades are prized all over the world. The classical musical styles or ‘gharanas’ are woven into the lifestyle of the people. According to P.V. Kane, Indologist and Sanskrit scholar, “There is hardly any city in the world that can claim greater antiquity, greater continuity and greater popular veneration than Banaras.” It is no surprise that Kashi is described as ‘The Eternal City.’ A city forever !

4 COMMENTS ON THIS POST To “KASHI – The City Eternal”